I wasn’t even aware of the Pathfinder RPG until Clave turned me onto the Glass Cannon Podcast earlier this year. Now I’m finding myself referencing Pathfinder rules while DMing my Dungeons and Dragons 5e campaigns (“Do you have Diplomacy?” or “Make a Fortitude save.”). 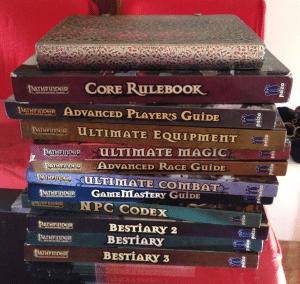 We love 5th Edition and several of us Nerds have a campaign going with plans to expand into roll20, but we won’t be content with just listening to Pathfinder for long!  We’ll soon try our own hands at Paizo’s RPG. But first we’ve got to build a bit of a library.

On the GCP’s recommendation, Jason sent me the Pathfinder Game Mastery Guide – bringing my Pathfinder library up to exactly one. But I’ve got the Core Rulebook, the first Bestiary, and a couple Adventure Path books in my Amazon cart for quick purchases the next time I have a few extra bucks.

Well now I’ve got some cart editing to do because Paizo has apparently gotten their hands on Rick Moranis’s shrink ray from Honey, I Shrunk the Kids and blasted both their Core Rulebook and the first Bestiary – shrinking them significantly…But at what cost?

This volume is not self-conscious about its size at all. Nowhere will you find a reference to its new dimensions. Nowhere will you spot the words “Pathfinder pocket edition.”  You have to look really, really close to even find the word “softcover” on the Credits page.  And that’s for a good reason:  Absolutely nothing is lost in the translation from hardcover to paperback; not one letter of the text or one amazing piece of artwork. 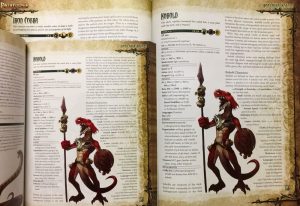 And in addition to the 350+ monster stat blocks (not including variants), the Bestiary brings some content to the table (like the Core Rulebook) that you’d normally have at your disposal only after buying a second book.

In fact, I’m sitting here with Paizo’s Bestiary on my left and Wizard of the Coast’s Monster Manual and Dungeon Master’s Guide on my right. Comparing the table of contents among the three manuals reveals that Paizo took the time to contain all of the monster information in a single volume instead of spreading it out between two or more like Wizards.

And of all this conveniently packaged with…you know…all the other monster information as opposed to having to refer to the DMG in addition to the MM.

Heck...the word “monster” isn’t even indexed in the Pathfinder Game Mastery Guide.  Why?  Because it is all – every bit of it – contained in the Bestiary.  Well done, Paizo! 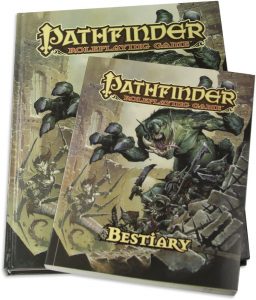 case…), I super appreciate not only that the volume is smaller, but lighter.  It weighs almost half as much as its hardcover ancestor (1.7lbs versus 3lbs).  For someone who travels for 2 of his 3 groups, this is just as big a deal as the size.

And as Jason mentioned in his review of the Core Rulebook: The price is unbeatable. The cover price of the Bestiary is less than $20. That is an impulse buy level price!

It has never been cheaper to grab up-to-date resource manuals than it is with the Pathfinder pocket edition.  I only hope Paizo continues to port their hardcovers into these super valuable and completely equal pocket-sized versions.

Money is the #1 reason why my RPG library has only grown by small steps here and there over the years.  The pocket editions significantly lighten the load on my wallet without robbing me of content.  That, my friends, is a double-win.

Grab yourself the Bestiary here and get ready to bring the pain to your Adventure Path or home-brew campaign. You can get it here.

[Disclosure: Paizo provided Nerds on Earth with a complementary copy of the Pathfinder Bestiary Pocket Edition for review.]