By The Bullpen On Dec 14, 2018 Last updated Dec 14, 2018
Share TwitterReddItPinterestFacebookEmailPrint

Clave (Co-founder of NoE and best beard on staff):  Hiya, nerds! This week, we’re chatting about board games. Specifically, we’re talking about some of our favorite board games of 2018. With an estimated 4,000 games released this year, it’s impossible to keep up. We hope this helps you find the signal amidst the noise.

To start, we’ll talk about the kinds of games we are drawn to. What are our ideal game types, in other words. And since I like Hannah better, she’ll go first!

Hannah (Minister of Uncontrollable Laughter at the Back Patio Network) Aw, shucks. Hi, friends! So, the first thing that usually catches me is the art. If a game has especially lovely or interesting artwork, that’s honestly half the work in getting me hooked. Otherwise, a good, solid storyline, straightforward gameplay, and a pinch of childishness are what I really love!

Clave Yeah, people overlook the theming and production. That stuff matters! What weight of game do you two like? Heavy? Mid?

Adkins (Co-founder of NoE and lover of the little baggies provided in board games) I am a Methodist at heart, and we believe in the middle. So I favor mid-weight games over the heavier offerings generally, but that’s not to say I don’t love me a nice and crunchy game!

Hannah Typically mid. Time is a big thing for me, too. My schedule during the week is usually pretty full, so I don’t always have time to tackle the heavier games. 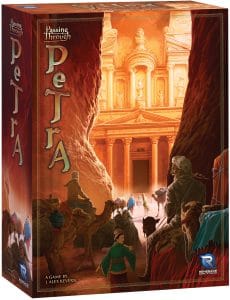 Clave Cool. OK, dear readers, now you have some context. We’ll be talking mostly about mid-weight games with some solid gameplay and production values. Hannah, what’s a good game like that that you’ve played in 2018?

Hannah Oh my gosh. The one I’m really excited about lately is Passing Through Petra! It was such a blast!

Clave Tell us a little about it.

Hannah Oh sure! Not only was it luckily sensitive to my time constraints, but I thought the art was phenomenal and the gameplay was super smooth and really easy to pick up. Adam and I sat down to play it one night and just fell right into it, and immediately started strategizing how to destroy each other. Super fun.

In the game, you start out as a citizen of the city of Petra, and your main goal is to spread your influence and become a super powerful trader. But it’s not as easy as it sounds.

Definitely something to check out if history is your thing!

Clave As a History / Biblical Studies nerd, I’ve had my eye on that since Renegade Game Studios announced it. The ancient city of Petra is such a slick theme.

Poor Adkins is being neglected. Can you chat us up on two games in rapid succession?

Hannah I believe in you, Adkins!

Adkins My Wednesday night gaming group is designed to tackle some of the pile of review copies we receive at NoE, and that gets complicated when we play a game that we wanna play again…and again, and again! We might have a stack of half a dozen unplayed copies, and still feel tempted to eschew them in favor of one we loved. 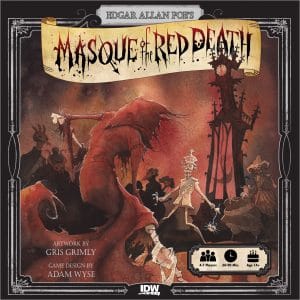 Two mid-weight games that give us that tension week to week are Heroes of Dominaria and Masque of the Red Death. Both are quick set ups with simple gameplay mechanics.

Masque won our Nerdie for Freshest Board Game of 2018 for its fun and unique play style.  There are some light board games and card games that complicate game nights, as well!

Clave The game that Danielle (my wife) and I have been enjoying is The River. It’s a Days of Wonder game, which if you know DoW, they only release a game a year and they are typically fantastic mid-weight games. We’ve already introduced another couple to board games through The River, so it’s a nicely accessible game.

Hannah, you have one more to recommend?

Hannah Another one that I had a huge blast with was Spell Smashers! Use letter cards to spell words for point values, then use the points to DEFEAT AND CAPTURE MONSTERS! What could be more fun? And educational!

Adkins YES! Spell Smashers was FANTASTIC. I got to play it thanks to our Nerd Swap program, and we adored it.

Hannah I’m so glad! Clave, I’ll send it to you next.

This was a game that we had to bust out when friends came to visit.

Clave Well, let’s not give away the milk for free. Let’s make folks check out your full review.

Adkins They better have clicked on all the other reviews I’ve linked above, as well!

Clave OK you two, give us either a wildcard like a light filler game, or give us a game that you’ve had your eye on, yet haven’t been able to get to the table.

Adkins Can…can I do both? Pretty please? 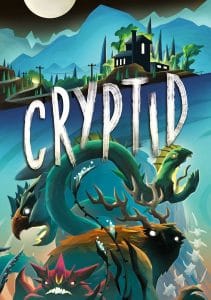 Adkins Alright, our go-to light offering is Cryptid from Osprey Games. We absolutely love that deduction game to pieces. We will often use it as a night-cap after playing something else on Wednesday nights.

And I finally talked my gaming group into springing for Gloomhaven. We won a Trunk or Treat competition, and with our earnings combined, we’ve got just enough to net the behemoth. We’re tired of just hearing/reading about it. It’s time to own and play this sucker!

Hannah I can’t wait to hear how you like Gloomhaven! I’ve really wanted to give it a shot, myself.

I have two light suggestions!! So, first is Arboretum. Easygoing, gorgeous card game, but with a bit of a challenging kick. Second is another card game, but this time one that Adam brought home: Unstable Unicorns. Just don’t play it when you’re in a serious mood. It’s fun, but could definitely be the cause of some broken furniture, if you’re angrily-inclined.

Hannah So, it’s a card game where you collect different, unique unicorns and keep them in your “stable”. Some have powers or special abilities, where others are just regular unicorns. There are also upgrades and downgrades thrown in so you can mess with your friends. The first player to collect 7 unicorns in their stable wins!

They also have some interesting looking expansion packs available!

Adkins Ooo, I love a game that lets me sabotage my opponents a bit.

Hannah Dude, anytime I can mess with my husband, I’m having a blast. (Sorry, Adam.) 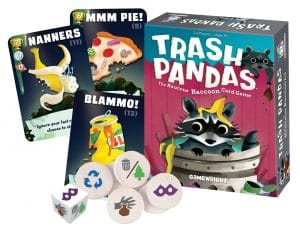 Clave I loved it from the name, no context necessary. Which reminds me: I still play Trash Pandas with my girls from time to time. If you can’t guess, it’s a silly little raccoon game.

Hannah I think I need this in my life!

Clave You do. Trash Pandas are for everyone.

Sad news, nerds, that’s a wrap. No more chatting for us, we need to go play some more games!

Adkins And start researching what goodies 2019 will bring with it!

Hannah Have fun, everybody!