By The Bullpen On Dec 3, 2018 Last updated Dec 3, 2018
Share TwitterReddItPinterestFacebookEmailPrint

Our category today is “Unusually Fresh Board Game,” which is a funky category for an award. With the term “unusually fresh,” we’re looking at board games that might be innovative, unusual, or quirkily under the radar. While these might not be the “best” board game of 2018, they are certainly great games, doubly so because each of them brings something fresh, funky, or unique to board gaming.

This year’s slate was difficult with literally hundreds of new board games released in 2018, but we narrowed it down to four before opening the vote to determine the winner of the Nerdie Award for Unusually FRESH Board Game.

2018 Nerdie Award for Fresh Board Game

Like soda fountains, sock hops, and sideburns, Welcome to… was a trend-setter for 2018’s board game scene. Set in the 1950s, Welcome to… invites 1-100 players to be the architect of the best little town in the U.S. of A. Players develop estates, parks, pools, and more, all by drawing cards and writing results on a scoresheet, a board game genre colloquially called “roll and write.”

To think Welcome to… is boring misses the fact that it’s a super engaging and fun game that can be played by a whole gaggle of people in under 30 minutes. Unsurprisingly, other board game companies quickly took note of Welcome to… and began to produce and re-market roll and write games of their own. That earns Welcome to… a 2018 Nerdie nomination for re-sparking a sub-genre in board gaming.  – Clave

Between Two Castles of Mad King Ludwig manages to be two seemingly opposite styles of game simultaneously: cooperative and competitive. You build two castles during play by drafting tiles and laying them down in cooperation with both of your immediate neighbors. The tiles are worth varying amounts of VP depending upon factors like adjacency and type of room.

But here’s the kicker: Your personal score is the lowest of the two castles you had a hand in building, and the highest of those personal scores around the table wins. Definitely a neat scoring mechanic! Plus this game’s storage system is unrivaled!  – Adkins

Cryptid rolled a natural twenty to hit and box cars for sneak attack damage on my Wednesday night gaming group. We were excited about the theme, and ultimately a little bummed about how lightly it was applied…but it is a fantastic example of a deduction game!

There are 108 hexes on the board, but the elusive cryptid only calls one of them home. Can you obscure your clue from your competitors while successfully deducing theirs? All without lying?! Super fun, super fast, super simple, and all without sacrificing anything on the strategy front. Tensions run high and victory is super sweet. Cryptid is definitely a worthy contender in this category.  – Adkins

But the Nerdie Award winner is…

Masque of the Red Death 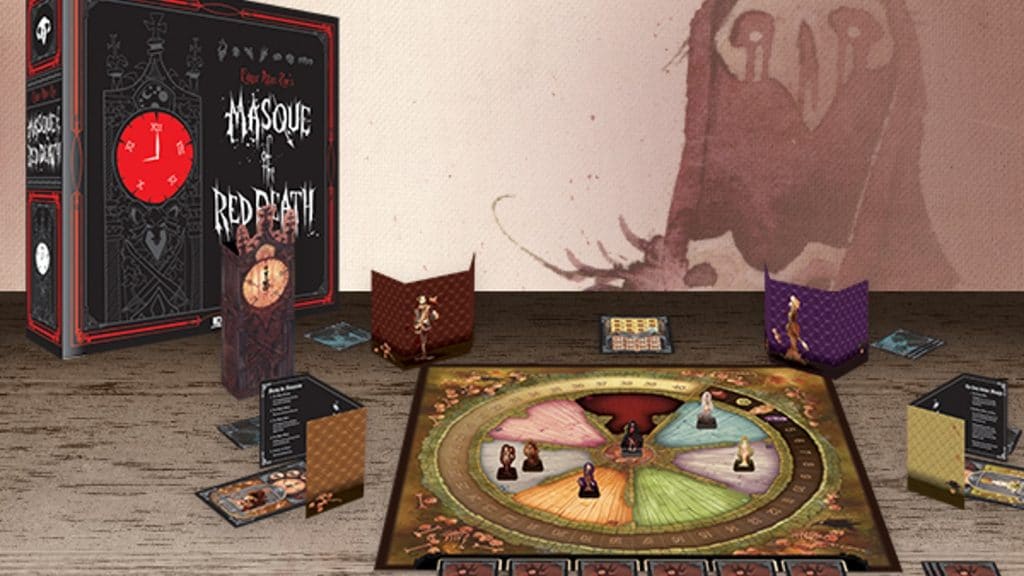 While there, they attempt to stick close to the prince who owns the abbey while also gossiping about the Red Death’s location. In the end sequence, the prince dies, and the Red Death makes its moves to kill the party attendees.

As intriguing as all that visual and practical parallelism was, the unique gameplay also made this game a winner. Strategy and memory are both heavily involved in acquiring enough information to survive to the end, but a bit of luck is also required in drawing the right cards.

For all these reasons, and the extremely detailed artwork, Masque of the Red Death is our Nerdie Award winner 2018 for fresh board game.  – Jeremy

Guildmaster’s Guide to Ravnica: Is this for D&D Players or for Magic Fans?

Between Two Castles of Mad King Ludwig: The Game-Baby We Didn’t Know We Needed