Between Two Castles of Mad King Ludwig: The Game-Baby We Didn’t Know We Needed

It borrows the partnership gameplay of Cities and the castle building and various completion bonuses of Castles. The best and most interesting of both of those games make Between Two Castles a gem; somehow better than its constituent parts.

Before the game had even begun, we already loved two things about it.

We were already off to a positive impression, and the game didn’t slow down there.

Between Two Castles is a tile drafting game that has elements of both cooperative and competitive play. Each player is going to help build a castle with each of the players to their immediate left and right by laying tiles. Everyone will start with 9 tiles in hand, pick two (one for each of the castles they’re building), then pass the remainder to their left (it switches to the right after the first round). 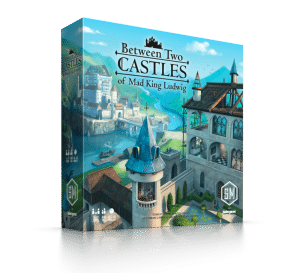 During the draft, players cannot communicate with one another. However, once the draft is over and players reveal their selected tiles, they can coordinate the placement of their tiles with their partners to build the best castle ever (which they will later name; another fun element of the game).

This process will happen a total of eight times over the course of the game, meaning each castle will have a minimum of 17 tiles (the 16 drafted tiles + the starting Throne Room tile), with the potential to add Specialty Room Tiles for laying 3 and 5 of the same type of tiles in the same castle.

But the number of tiles isn’t the name of the game. Most of the tiles in the game are not worth Victory Points (VP) by themselves. Some only net you VP if they’re placed adjacent to other types of tiles, others score you points for every tile of a certain type within your castle, and still others score you points depending on the number or type of room in its column.

Placement is everything! And once a tile has been placed, it cannot be moved so choose carefully.

When the game ends, players use the provided handy dandy scoring sheets to move through every type of room in their castle and assign them a score based on its VP conditions. The scores across all types of rooms are then added together to give the castle a value.

Think of it this way: It’s as if Mad King Ludwig said, “You know…I want a castle. But I don’t want to pay an arm and a leg for it, and I definitely don’t want to underspend on the thing because what would the other kings think then?!”

The two pictures below are the scores for the two castles I had a hand in designing. The score of 70 was not only the highest of my two castles’ scores, but also the highest score at the table. No help at all there! But Castle Middle-Finger’s (named after the shape it ended up taking on) 60 points were enough to win the day! 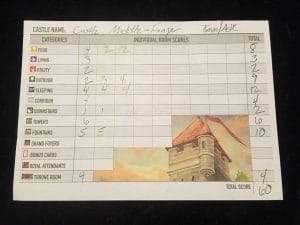 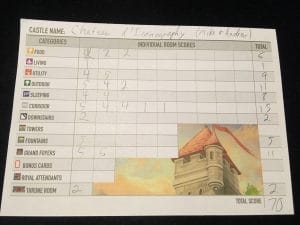 We were impressed from beginning to end with the production decisions and quality of the game. And it proves that you don’t necessarily have to reinvent the wheel to make something great. Somethings borrowed brought us something great in Between Two Castles of Mad King Ludwig.

7 Essentials To Reading a Conan Comic

Board Game Review: Your City Needs You in Machi Koro

Board Game Review: Interpret the Rainbow with Hues and Cues