Masque of the Red Death From IDW Games is All Party, No Plague

And now was acknowledged the presence of the Red Death. He had come like a thief in the night. And one by one dropped the revellers in the blood-bedewed halls of their revel, and died each in the despairing posture of his fall. 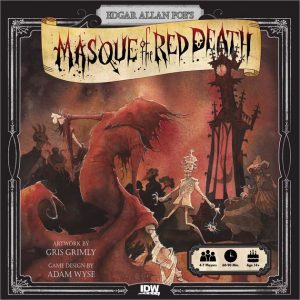 Perhaps this spoiler alert comes a bit late, but that’s how Edgar Allen Poe’s “Masque of the Red Death” reaches its conclusion. The quote also sums up the crux of the board game of the same name by IDW Games.

Thematically, the game follows the plot of the story, which is included at the end of the rule book – a nice touch. The game board is broken up into seven colored chambers, just like the abbey of Poe’s Prince Prospero. Players, nobles like the guests in the story, must curry Popularity by mingling with the prince. And just like the story, when the clock strikes midnight, the Red Death comes for the prince and his party mates.

As I’ve written before, I’m a sucker for things like velvet bags as game components. But I’ve also discovered that this really extends to any type of unique game piece, and this game certainly has one in the form of a cardboard clock that is easily assembled with magnets. The downside is that this clock is mostly unnecessary due to another set of pieces that keeps up with the prince’s movements. But it’s cool-looking, and that’s really what matters here, honestly. 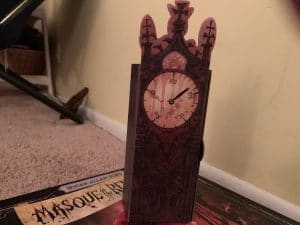 The rest of the game pieces are equally cool. They’re all drawn in a really interesting style by artist Gris Grimly, and the player-specific parts are unified by individualized masquerade masks. The whole game looks really nice and ties together well, with the exception of some shading on cards that doesn’t completely match the area on the board that it’s supposed to represent. Even there, though, symbols match to clear up any confusion.

This game is a combination of various game tactics unlike any I’ve played.  Each player starts with a standard hand of cards plus a personality card unique to each, which is drawn at random.  Some of these cards can be played and returned to your hand and others must be discarded after play, so timing is everything with regards to some of those cards!

The cards allow you to do a number of things: 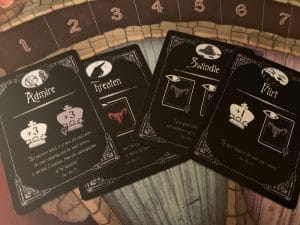 The Gossip cards are prime resources!  It’s up to each player to keep track of all of the information they manage to collate during play because their very survival depends on it.

Once the game reaches the point when there are “twelve strokes to be sounded by the bell of the clock,” the prince dies and players must mark their intended movements on character cards. Each player’s starting point for these series of movements is wherever they are when the game end is triggered, so there is a definite element of strategy here.  You might have to stop currying favor with Prince Prospero so you can move to an ideal room in preparation for the appearance of The Red Death.

From that starting point, players use the information gathered during play to choose to move clockwise or counterclockwise one room, or stay put, for each of the six rounds of The Red Death’s movement.  These movements are then revealed. The Red Death then enters a pattern of rooms determined by cards drawn during setup, killing any occupants in the room when he enters it.

The survivor with the most points, based on Popularity from the prince and other game choices, wins.

(Editor’s Note:  You can read the entire rulebook online from IDW here!)

It’s tough to classify Masque of the Red Death into a game type, and that’s a good thing. Styled in its own way, the game challenges players to make the right choices in-game and even memorize information to be used later. Players must also choose just how much to value Popularity relative to information.

In our game, four of six players survived the plague, meaning points carried more weight than we initially guessed. I’d love to play again to see how frequently things work out that way, and I’d recommend any game or literature lover pick it up and give it a chance before “Darkness and Decay and the Red Death (hold) illimitable dominion over all.”

Want to experience the full history of roleplaying games? Look no further than the Alexandria RPG Library