One of the things that has perhaps fascinated me the most in my first few months playing what I would call “next level” board games – the world beyond Monopoly and Risk – is that people have found a way to make a board game about anything.

The latest adventure for my friends and I, Castell by Renegade Game Studios, was another such game. Based on the Catalonian tradition of human tower building, the game requires you to recruit and train different sized tower performers to win festivals across the region.

So, for a little background information, I seem to really like velvet-ish bags for storing things. I’ve always been intrigued by the purple bag that Crown Royal comes in, and I was really pleased when Earth Nerd Adkins gave me a small green bag for my dice. 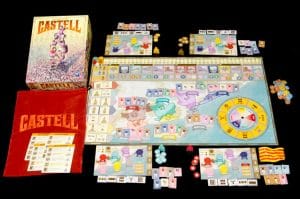 Thus, when I realized that Castell came with a somewhat oversized red velvet bag, I was excited. Mind you, this bag is mostly unnecessary. It’s purpose is simply to randomize the selection of the tiles that represent your castellers, or tower performers, which could obviously be done without a red velvet bag.

But that doesn’t matter. The bag is great, and I love it.

Aside from that, this game has plenty of pieces and parts, but it’s all really well-decorated. The one gripe would be that the four player colors don’t actually match across the different pieces that are associated with that player, but they’re close enough to know what belongs to whom.

The mechanics for each turn are complex without being too complicated. For 10 rounds, each player gets to carry out several actions, including training their castellers, recruiting new castellers and moving to a new town in the region.

In these towns, there are local performances that can be completed by meeting specific tower requirements. During rounds 3 through 10, there are also festivals in particular cities that require each participant to create a tower including performers of specific sizes.

These festivals require strategic casteller recruitment and movement patterns, and due to the various ways to acquire victory points, players might choose to skip a particular festival. One neat facet is that if there are fewer players participating in a festival, fewer victory points are available, which would encourage players to attempt festivals where others are competing once there are two festivals available in later rounds.

Full disclosure: I won our first effort at Castell, and I’ve been accused of specifically enjoying games that I win.
For Castell, winning is based on victory points with your base score being the point total from your best tower at a festival. From there, you add bonuses for festival awards, local performances and other feats throughout the game. While it’s certainly possible to win without doing well at every festival, those are probably going to need to be your primary focus to have a shot at winning.

As such, the possible strategies for winning a game of Castell aren’t as varied as other victory-point based games that I’ve played. Still, there are multiple ways to get victory points from festivals and even multiple festivals per round, so players can be successful without taking the same path.

Not surprisingly, I enjoyed a game that I won. 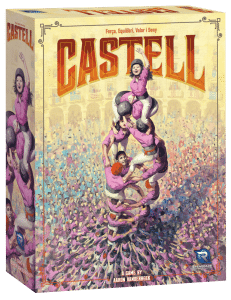 But strangely enough, I’m mostly interested in playing again to see how much I like it when things don’t work out so well for me. Every round, I was able to compete in a festival and win some sort of prize because I had the right kind of performers for that festival and was close enough on the map to get to the city where the festival was held – all random selections at the beginning of the game.

That wasn’t the case for other members of my group, and I wonder how my perception of the game would’ve changed if I had to make difficult decisions based on the next festival, or perhaps choosing to do a different task altogether.

Plus, it has a neat bag.

You can grab the game (neat bag included, of course!) from Amazon here.

Disclosure:  Nerds on Earth was provided a copy of Castell by Renegade Game Studios for review purposes.

A Review of Gunkimono, the Upcoming Board Game Release from Renegade