You and your tabletop gaming companions are adversarial spies attempting to be deduce the contents of a secret document in the newest trick-taking game from the folks at Wizkids Games:  Spy Tricks.

Tools of the Trade (Components)

Everything about Spy Tricks is small; especially the cards.  This seems to lend itself to the idea of it being a travel sized game, but I think I would have equally considered it so with full sized cards and I would have liked it much, much more.

The game mat, required for play, is a folded piece of paper that definitely would have seen an improvement as folded cardboard or even tiles you set down adjacent to one another.  The folds in the mat made it difficult to place cards and pawns confidently.

Apart from these two gripes, the rest is pretty standard fare as far as punched out tokens and pawns go!

Tricks of the Trade (Gameplay)

Gameplay is remarkably simple.  You deal 6 cards to each player, place a few face up on the play mat (the number of which is determined by the number of players), and place one card face down underneath the mat.  The goal is to correctly guess the suit and/or number of the facedown card.

This is accomplished through a series of 5 rounds of tricks.  The winner and loser of each trick (determined by Number and Suit Power) get to place their pawns on a suit, number, or specific card space on the mat – thus making a guess at what lies concealed in the secret document (the facedown card under the mat).  Cards that are played in any given trick are placed face up on the mat.  This entirely eliminates certain cards from being the secret document while limiting the pool of remaining potential candidates. 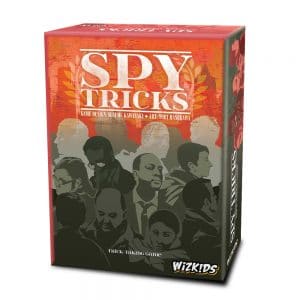 After 5 rounds, each player still has one card in their hand that remains hidden from the others during the final round of pawn placements.  Victory Points are awarded for correctly guessing the suit (2), rank/number (5), or exact card (10), and you reset and continue play until each player has had a chance to be the start player.  The person with the most VP is declared the “Best Spy!”  (This was me, by the way; I feel like I have to brag about winning given Timmerman’s braggadocio in his Castell review.)

There is an obvious need for deductive reasoning during play when it comes to pawn placement, but there’s also a decent strategy required to ensure you’re either the Winner or the Loser for as many tricks as you can manage.   If you fall in the middle, you won’t get to place any pawns, so play wisely!  At times your played card will be largely determined (if you have the suit played in hand, you have to play it), while at other times you’ll want to strategically “break” suit to lock down a pawn!

And there is a neat mechanic called Salvation that (at least potentially) lends some aid to the player with the lowest score at the end of each Round.  He or she gets access to Helper Pawns that can double the Victory Points earned with its placement.

We definitely wish the mat was something more substantial and that the cards were full sized, but it plays quickly and easily enough.  The theme is pretty weak if I’m honest.  It really only affects the box art, the correct name for the card stuffed under the mat before each round, and the title the winning player earns at the end; so mostly terminology and not so much aesthetics, I guess?

Nonetheless, it’ll be one we return to from time to time, for sure.  All in all, my gaming group enjoyed Spy Tricks, and anything that keeps us meeting together weekly is worth the cover price.

You can snag Spy Tricks from Amazon here!

Edition Wars: How to Manage the Change to Pathfinder 2.0