A Review of Gunkimono, the Upcoming Board Game Release from Renegade

Gunkimono is the Japanese word for “War Tales.” I know this because it says so right on the box of the latest release from Renegade Game Studios. Gunkimono is a game for 2-5 players that plays fast. A typical 2-3 player game will play in under an hour.

Interestingly, Gunkimono is a re-theme of the 2009 game Heartland by Jeffrey D. Allers. This reimplementation takes players to feudal Japan, where daimyo in the pursuit of honor are marshaling their troops and building strongholds to bolster the strength of their armies. Players take on the roles of these daimyo, plotting the placement of their military units across the countryside.

I’ll first tell you about the components of Gunkimono, I’ll then describe the play style, wrapping this up by sharing what I perceived to be the strengths and weaknesses of the game.

In addition to a game board that utilizes two halves to track either honor or unit placement, Gunkimono has a collection of small and large army tiles of 5 types of troops:

The choice of victory points or Honor makes for a fun balancing act in Gunkimono. Click to embiggen.

Players can zip ahead with the more straightforward victory points. Click to embiggen.

The Honor track is a balancing act, but it unlocks Strongholds. Click to embiggen.

If a unit type is adjacent to a like type, you score victory points. Or you can choose to take the Honor that is noted in the lower corner of each tile. Click to embiggen.

Once a Stronghold is built, you never know when another player will carve it up by placing new tiles. Click to embiggen.
Prev 1 of 6 Next

Gunkimono has some interesting elements to balance in its gameplay. First of all, the right side of the board is where players alternate placing their large army tiles, stacking them up sort of like Upwards. The noteworthy rule  is that a unit type can’t be placed on top of a unit of the same type.

So if one side of your large army tile represents an infantry unit, it can’t be stacked on top of another infantry. So players must rotate their large tiles 90, 180, or 270 degrees in order to find a great place to place a tile. But as you eyeball that perfect spot, it might just be that another player places a tile there, which shifts the board again, making you need to look for new placement in order to maximize your victory points. .

This core mechanism of the game is a lot of fun. That fun is boosted further in how the tile placement is scored. When you place a tile and that type of unit is adjacent to a similar unit type, you create a formation and you count the total units, getting one point per connected unit, regardless of how large the formation grows to.

Plus, the large army tiles have two ends, so a perfectly placed tile will be adjacent to a large of of the same type of units that are represents on each end. There is a scoring track around the board and players can zip their scoring token around the track with clever tile placement.

But players might not want to focus on victory points at all. Gunkimono has a nice system along the left side of the game board that gives an Honor target depending upon how many players are in the game. (My first play through was a 2 player game, which plays fast.)

The Honor track is a balancing act because once all five of your unit types–infantry, samurai, cavalry, spearman, and archers–have reached the Honor threshold, you unlock a Stronghold that can claim a formation on the right side of the board.

The Honor track can then be pushed further in order to score end-of-game victory points, meaning the player who shot ahead on the victory point track might find that other players get within striking distance by focusing on Honor.

In short, tile placement is fun and quick and the Honor vs. victory point balancing provides nice strategy.

If I had to express a criticism of the game, it would be in the illustration / graphic design. The colors of the 5 different units are muted as opposed to bright. Further, the look of the different unit types–like between a spearman and infantry, for example–can be confused if you aren’t looking closely. 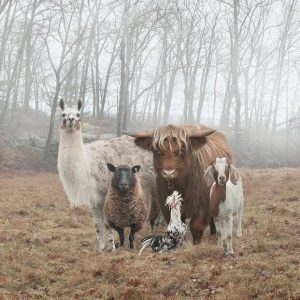 Look at the photo to the right. I’m a firm believer that if you have a variety of unit types, they should be immediately recognizable from one another, even by silhouette.

To be clear, I’m not suggesting that samurai be replaced by a llama. As an 80s kid who spent hours trying to stick ninja stars into trees in the backyard, I love the theming of Gunkimono.

I’m just saying that the unit types are difficult to parse at a glance. The friend I was playing with and I have our old man eyes, so we had to squint a little throughout the course of the game when placing tiles, so a little more differentiation among the unit types would have been welcome.

If a fast tile laying game with a system of strategic balancing appeals to you, then you will want to give the “War Tales” of Gunkimono a try! It’s available soon from Renegade Game Studios or for pre-order from Amazon, but consider requesting it from your FLGS.

[Disclosure: Renegade provided Nerds on Earth with a pre-release version of Gunkimono in exchange for an honest review.]

7 Reasons Why You Should Run a Published Adventure