By Clave Jones On Apr 4, 2018 Last updated May 16, 2018
Share TwitterReddItPinterestFacebookEmailPrint

The editorial direction of Nerds on Earth is to focus on what you’d find in a game shop (FLGS), meaning roleplaying games, board games, and comics, plus an occasional other nerdy thing thrown in there. That said, it’s pretty remarkable that we haven’t spilled any ink about Gloomhaven on this website. 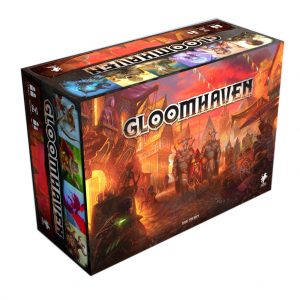 Part of that may be because Gloomhaven first went to market via Kickstarter only to come to your FLGS a year later, which can often be a walled garden in the board gaming industry, as Kickstarter-only games don’t always blip on the radar of the general population of board gamers. But the main reason we haven’t already covered Gloomhaven is what else do you say about a game that has been as thoroughly covered as Gloomhaven has?

Well, I’m a nerd, so I’d get my nerd card revoked if I didn’t passionately state my opinion, despite the fact that no one really needs to hear what I’ll say. So here are my thoughts on Gloomhaven, the biggest board game of all time.

When I state the biggest game of all time, we need to be honest with ourselves and note that that game is Monopoly, as it’s been around for decades selling tens of millions of copies. But I’m a proper board game snob, so I rightfully dismiss a game like Monopoly, and I indeed posit that claiming Gloomhaven as the BIGGEST board game of all time might not be the tremendous stretch one thinks it is at first thought.

First, Gloomhaven is LITERALLY BIG, as in the box is huge. The footprint of the box is nearly double the size of a typical “Ticket to Ride-type” board game box, and it’s twice as high to boot. Math nerds, calculate the cubic volume on that!

And it’s heavy. It’s not like a potato chip bag where there are four chips and the rest of the bag is filled with air. It’s densely packed, stuffed full of cardboard. It’s a twenty pound board game, so Gloomhaven is quite literally BIG.

Second, Gloomhaven is big on the charts. Board Game Geek is the online resource for board gaming, providing detailing information on thousands of board games. It’s also an active community that crowdsource rankings of board games.

Gloomhaven is ranked #1 overall, meaning it has been voted by thousands of nerds as the best board game of all time. That’s a big achievement.

Finally, Gloomhaven has BIG GAMEPLAY. This isn’t a fluffy game with shallow gameplay. It has an incredibly well designed ruleset with great depth of play. That said, it is in no way a complicated game. For it’s scope, it is actually smooth and elegant in it’s play.

I should note that Gloomhaven is a persistent game. That means that after each game session, players lock in their decisions on what to do, and this determines how the story continues, kind of like a “Choose Your Own Adventure” book. It’s also a cooperative game where players will fight against automated monsters using a card system that determines the order of play and what a player does on their turn. 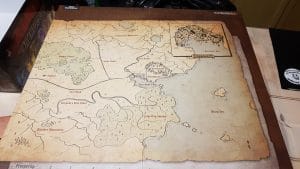 Included is a BIG “fantasy map” game board and you place stickers on each location once you complete that scenario. There are–I don’t know–like 90 scenarios! It is shockingly impressive.

Actually, the entire game is shockingly impressive. I love board games and comics and miniatures and all sorts of nerdy things. I’m impressed with the quality of the items us nerds enjoy. But Gloomhaven left me slack-jawed the first time I opened the box, absolutely and overwhelmingly stunned with the game. I’ve never seen anything like it and inspires me to open up a thesaurus to look up synonyms for impressive. (BTW: Profound, monumental, splendid, remarkable, extraordinary, and grand, among others.)

So, yeah, GLOOMHAVEN is a BIG game.

And with a MRSP of nearly $150, Gloomhaven also has a big price tag. But if immersive RPG-like games are your style, it still comes out as a bargain, mainly due to the fact that the unconscionable amount of playable content in the box means that Gloomhaven can be a game a nerd plays for a decade and still may not make it through. Because it’s also a BIG commitment.