By Jason Sansbury On Sep 7, 2015 Last updated May 28, 2018
Share TwitterReddItPinterestFacebookEmailPrint

Some of the best X-Men issues of yesteryear have been marked by gatherings where they have some fun, play some games and just be a family together. With football kicking off all over the nation, it got me thinking. If I was building a football team from the various X-Men and related teams, what would it look like?

Here is my all time X-Men on the offense side of the ball: 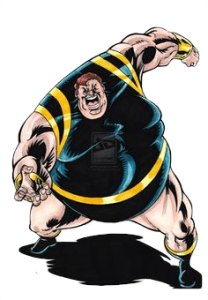 The heart of any great offensive team is the offensive line. You want players who can hold their ground, clear holes for running backs and keep your quarterback healthy.  And at the center of the line you need a center and, really, this was the easiest decision of all: you need the Blob. The unmoveable mass of a man is going to hold that line against any defensive push.

Next, you need guards, players with quickness, who can pull and make space for your running back. We have two great players for the left and right of the Blob: Colossus and Juggernaut.

These two formidable foes who have many epic battles together will solidify the middle of the line against any foes. 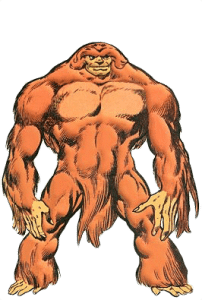 Which leaves just the tackles, the outside edge of the line, who need to be fierce AND quick. Most teams pick one player and wind up being stronger on one side or another. But not this team; we can have remarkable bookend players with matching skills: Alpha Flight’s Sasquatch and Snowbird in Sasquatch form. Sure, Canadian football is different than here in America, but these two behemoths are going to be great against the edge rush!

Wide receivers need speed, hands and ability to go get the football. For one of our receivers, we are going with a flat out speed burner: X-Factor’s Quicksilver. He literally can’t be overthrown. Sure he is going to be a bit prissy about going over the middle to make a catch, but you use his gifts in the best way possible: straight out speed.

For the other wideout, I wanted agility, hands and someone who has a knack to go to where the football is: Nightcrawler. Imagine being the quarterback and being able to throw to a spot to where you know he is going to be! And Kurt’s Yards After the Catch stats could be amazing for all you moneyballers. 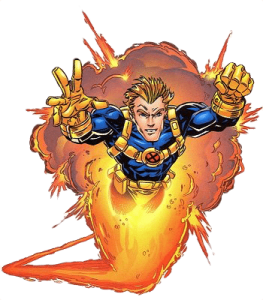 Tight End. In old archaic offenses, you needed a guy who could block and catch. But in modern football, you mainly need a guy who has some speed and isn’t scared to catch a ball thrown over the middle. And we want Kentucky’s own Sam Guthrie, aka Cannonball. I mean, he is nigh invulnerable when he is using his power. Sure, his hands are probably suspect but we can coach that up.

Full back: This pick may be controversial but you knew he was going to be on the field somewhere. I need a player who is fierce, scared of no one and has the ability to clear a whole, even if it means he is slicing one open. And Wolverine is the best at what he does. Logan is strong. The claws are intimidating weapons and his short size belies his adamantium skeleton and healing factor. 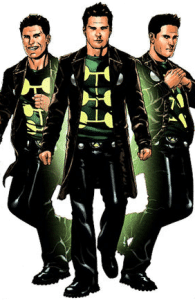 Running back: If you have ever tried to win a fantasy football league, you know the truth: you can never have too many running backs. And if one gets hurt, you need another one ready to go, hopefully without much of a drop-off in talent. I think we have the perfect solution: Jamie Madrox, the Multiple Man.

Seriously, he isn’t going to be the best athlete on the field but think about it: your running back goes down with busted leg and in comes the back-up: an exact duplicate of your first stringer. Never again will a running back go down to injury and ruin your season!

Quarterback: You need your quarterback to be a skilled athlete, gifted at all the different things I quarterback is good at: evasive, able to throw a deep ball, and to read defenses. In the ideal world, you’d want a guy who is a film junkie, able to study and learn from all of the greats from history. And we have a perfect solution: the human mimic the Taskmaster! A week of watching the NFL greatest games and this guy is able to lead you into the promised land of victory.

Next up: what kind of defense could you put together to stop this offensive all time X-Men team?