I know you’ve heard the noises. I also know you’ve harbored thoughts that maybe something evil lurks in the cold, dark corner of your basement. But what if you aren’t crazy? Because that noise is real and it has a name…the Derro.

Derro Lore: Origins of the Derro

In a 1945 issue of Amazing Stories, Richard Sharpe Shaver claimed he had personal experience with a ancient and sinister civilization that exists in caverns beneath the earth. In 1932, Shaver noticed strange things were happening beneath the factory he worked in, things frightening enough that it forced him to quit his job.

The next several years of Shaver’s life is in dispute. Some claim that Shaver spent those years hospitalized for psychiatric problems.

Shaver himself swore he spent those years in the cavern world of the creatures he called “derro.”

As proof, Shaver produced a 10,000 wold document detailing an advanced alien race that he claimed built a vast subterranean civilization, only to abandon it for another planet.

Those aliens who missed the space ferry off planet slowly degenerated over time into a small population of deranged sadists known as “derros.” Shaver claimed to have witnessed these derros in their cave cities and had also seen the derro kidnap thousands of surface-dwellers for meat.

What was worse, Shaver claimed, is the derro retained vestiges of their advanced machinery that allowed them to spy on the surface-dwellers as well as project tormenting thoughts or voices into our heads. Indeed, Shaver swore that derro were directly responsible for much of the misfortune that plagues our lives even today!

The March 1945 issue of Amazing Stories that featured the derro sold out. What’s more, tens of thousands of letters poured in from others who claimed that they, too, had heard the strange voices that could be attributed to the derro.

In the coming years, the “Shaver Mystery” grew as new stories went to print. In the 60s and 70s, Shaver dedicated his life to searching for physical evidence of the derro among rocks, which he claimed were labeled with ancient runes and languages, provided you knew what you were looking for.

Luckily, us Dungeons and Dragon fans know the derro exist. When D&D was created in the 70s it was heavily influenced by pulp and weird science fiction. As such, the “derro” – an evil race of subterranean dwarves – were created for the Lost Caverns of Tsojcanth module, then further described in the AD&D Monster Manual II.

These chaotic evil derro make raids on the surface to kidnap humans for use as slaves and food, and some among them, called Savants, possess magical and psychic powers they use to influence minds. The derro have strongholds deep underground in the Underdark, and it’s there where they plot the overthrow of surface-dwellers.

Cruel and insane, they take pleasure in tormenting others. And with blue-gray skin, tufts of straight white or yellowed hair, pale white eyes that lack irises or pupils, and wielding hooked spears, the derro even look the part of evil subterranean dwellers. 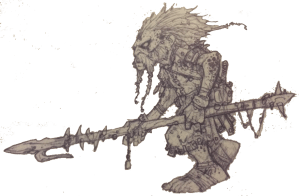 Derro lore grew with each new edition of D&D, eventually spreading into new domains such as the fantastic Pathfinder RPG. Currently, the derro have raised their head to the surface once again, being part of the current Out of the Abyss storyline of D&D 5e.

Alas, the D&D 5e derro is disturbingly misunderstood, likely because Richard Sharpe Shaver is no longer living and able to provide his expert eye witness accounts.

D&D 5e derro aren’t described as descended from an ancient alien race. Instead, they are described as the result of cruel experiments on dwarves by mind flayers. It is this enslavement by mind flayers that is thought to have driven the derro mad, but we now know that Richard Sharpe Shaver would certainly disagree with that assessment.

Equally plausible (in order to obfuscate the facts surrounding them) the derro may have for years been projecting mind-altering thoughts into the mind of Chris Perkins, the story director for Dungeons and Dragons. That’s so derro.

Derro Lore: What is the truth?

Still, not everyone believed Richard Sharpe Shaver’s tales from 1945. Instead of trusting the man at his word, people called him crazy, even as they profited from the wild stories he told. In fact, artist Jermaine Rogers disputed much of Shaver’s claims, meaning there might not really be sadistic creatures living in the cellar under our cellar. Said Rogers: “[Shaver] was fooled…Shaver was disinformation.”

Indeed, Rogers said that Shavers couldn’t be trusted and there were, in fact, no aliens. (I knew it.)

Instead, Rogers claimed that “the Derros have much more complicated goals” and that derros are actually 6-ft tall teddy-bear like beings with bulging red eyes, commanded by overlords known as “Veil.”

Rogers is so convinced that he put his version of the derro on rock and roll t-shirts.

You can grab Out of the Abyss storyline here. Archive.com has those old Amazing Stories issues, which seem so ridiculous today, yet had huge communities of folks who believed them at the time.

Thanks for reading Nerds on Earth. If you’ve enjoyed anything, please help us out by sharing the content using the social media buttons around the site.