I am a son of the south. I say that because I am going to be writing about something that could be challenging to address without admitting who we are and where we come from.

In my early childhood, my parents ran Waffle Houses, the last bastion of a melting pot in the American South in my opinion. Poor, rich, black, white and more all love an order scattered and smothered. But I also grew up going to the “bad” schools. I have real memories of being one of the few white kids in my elementary school, two full decades after desegregation ended. The heroes to my rebellious young adolescent self weren’t country stars but people like KRS-One and Public Enemy.

In high school, I was a kid who wore a t-shirt to church youth group that said “Jesus was a black man” with a picture of him on a cross to prove it. Honestly, you can’t grow up in the south and not have thought about and considered the issue of race and how it impacts society.

So, race and thoughts about race aren’t new to me and I’d like to think I am more thoughtful than a lot of people are in regards to these issues, while freely admitting I still have immense blind spots. So what does that have to do with the nerdy things we talk about here on the site?

The Walking Dead television franchise might have a race problem.

I am not the first person to say as much. In fact, a quick Google search shows that lots of people have addressed the issue in different ways and in different concerns. And to be honest, early in the original series, it was easy to give the show a pass.

The Walking Dead’s neo-gothic Southern landscape felt in some way that race was a concern, even as African American characters struggled to survive, dying at higher rates and more often than their white counterparts. It especially seemed true of African American male characters. I mean, certainly, the racist Meryl was dealt with but there was a sense that something wasn’t quite right.

And fairly, a lot of the criticism died down when really solid black characters like Michonne showed up.  It just seemed to be a pattern that the survivors of the zombie apocalypse weren’t going to be black men. And if they did survive, it wasn’t going to be for very long. Admittedly, later seasons of The Walking Dead did some really healthy things to build an increasingly diverse cast, as NPR noted in November 2014.

So the thing that I can’t get over is that when launching a new series out of this zombie universe, in a city as diverse as Los Angeles, why are they seemingly forgetting lessons learned? One of the things that I would think that a spin-off series would allow you to do is to course correct some of the errors made in the original, especially early on in the original.

For starters, Fear the Walking Dead has so far only really shown us two up-close zombies who are killed: the young black drug dealer and the older black principal. Psycho-analysts might have a field day about what it means that our first and earliest monsters in the show are black men. (Yes, there have been other zombies, but these are the ones we have seen up-close and these are the ones we have seen die.)

And the major issue for me is the tone deaf way the writers and producers used the recent civil unrest over police brutality in the scenes with Christopher this week. It just felt shameful, a way to guarantee a connection without an understanding of the deeper issues. 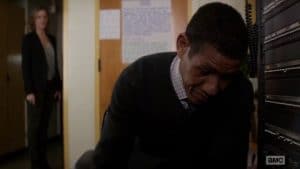 We live tweet the show among the Nerds on Earth twitter feeds and when these scenes happened, all of our gut reactions were the same thing: “This is really, really in poor taste and I can’t believe they are doing it.”

And just because I wanted to make sure that we weren’t alone on the issue, I did a Twitter search of two terms together: #FeartheWalkingDead and #BlackLivesMatter. In doing so, two things became clear: that I wasn’t the only one who sees the parallels and that people have real concerns and criticisms of the franchise.

And the part of it that I don’t understand the most is that the writers of the new series knew the criticism and it appears they decided to press forward. Some questions: 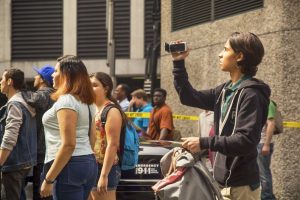 In fairness, the scripts were written and the show was filmed months ago. Maybe if you gave them a chance to set up and establish the riots again, they would choose a different route now, one that wasn’t so politically and racially charged. What was then an interesting piece maybe over time has grown to be a more charged issue. The context between when it was written and when it aired has certainly changed in profound ways.

From the highest rated cable show on television, I expect and desire a little bit more nuance and thoughtfulness, especially when there is a track record of real and deep concerns over how African American men in particular are treated in the two shows in the franchise.

The criticism of the original show is fair and while there have been steps in that show to deal with it and address it, I don’t understand why the same race mistakes appear to be made in Fear the Walking Dead.