After last week’s hopefulness of not having a terrible episode, can the cast and crew put together another decent episode in the 5th episode of the series, Fear The Walking Dead episode 105: Cobalt?

We open with a well dressed black man in a cell with our runaway/captive Doug, who Travis talked down a week ago. And the man that IMDB calls Strand manages to talk Doug into a bit of a breakdown, pointing out that his wife will be fine selling her body in this new world economy, as if most of the zombie loving world haven’t read World War Z.

Then we see Daniel, the barber, doing a really bad Edward Scissorhands or Sweeny Todd impression, having caught his daughter’s soldier love interest. Madison stumbles upon them and we wind up with a genuine moral dilemma, does she look the other way? And she does, thinking this is the only way that she may ever see her druggie son Nick again.

Meanwhile, Travis is trying to talk to the soldiers, who appear to be drunk with power, exhausted and slowly realizing that they can’t do much. When one soldier gets out of line, he gets the beatdown. When Travis points out that this treatment doesn’t end well for everyone, as the natives are getting restless inside the camp, they wind up loading him into a humvee. 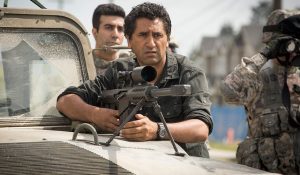 Along the way, they spot a zombie in a donut shop and set up the shot and try and force Travis to pull the trigger. When he can’t, the lead soldier Lt. Moyers takes the shot. The caravan then winds up needing to help another group and they storm into an apartment complex, shots are fired, grenades are thrown, and then a deserter comes back and takes off, saying he will take Travis home and that he is getting to his family in San Diego.

Alicia and Christopher then go into the house of someone really wealthy. They begin trying on clothes and I think we are supposed to believe there is a burgeoning sexual tension between the two. It remains unconsummated and eventually they decide just to break things. It feels like they want it to be a scene from a John Green book filtered through the zombie apocalypse, which actually sounds like a really good young adult novel I would read.

At the hospital, Liza is helping, being a nurse and doing what she can. She is deeply concerned for Daniel’s wife. Eventually, she discovers her locked away in a basement cage. The sad news is even after she has had her foot removed, she is septic and will die. As Liz tries to help her with the help of Doctor Exner, she is hallucinating, talking of all the bad she has done in her life and accepting the punishment that may be forthcoming. She then uses a cattle implement to whack her dead body in the head after she dies naturally. 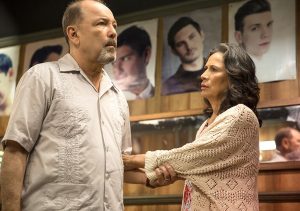 It turns out her barber husband has unearthed something: Cobalt. Cobalt is an operation to evacuate the valley and then “humanely” kill everyone. The tortured soldier talks about how they learn it was all going awful in an arena that they ultimately decided to lock everyone in because they couldn’t tell who were walkers and who weren’t. Travis is mortified by the torture but seems to realize that it has gotten them the information that Cobalt happens tomorrow morning. And that only seems to be confirmed when Christopher and Alicia see soldiers rolling out of town with looted items filling their trucks.

At the medical jail, Strand saves Nick from heading to the prison of death that happens for people with a fever. He then waxes poetically about how a new breed of people will survive, people like Nick, whose heroin addiction he admires somehow. It is very weird and is meant to be very deep but I am not sure they stuck the landing.

We close with Daniel walking up to the arena, verifying what the soldier said and making Cobalt and the escape the final closing act of this season next week.

So I give this episode a 6 out of 10 nerds. They have definitely done something to get next week’s finale a plot push with the coming of Cobalt. How things play out from here will be interesting, especially with Madison and Daniel desperately wanting to save their relatives and the others probably wanting just to get out of town. How will they survive? Will Travis’ humanity survive?

You’re Never Weird on the Internet (almost): A Review

Level Up Your Stats with Nerdy Workouts