After last week’s episode that showed solid movement of the plot forward, there was a small sliver of hope that the remaining episodes of the show would have something more substantial to offer.  Did it succeed? Here is what happened in Fear the Walking Dead episode 104.

[divider]Recap of Fear the Walking Dead Episode 104: Not Fade Away [/divider]

The show opens and we get Christopher on the roof, talking to his camera, which must have the most amazing battery life ever. This serves as an exposition dump, as we quickly learn that what has happened since the last episode.

The story is now in Day 9 since the soldiers arrived and they are shown to have the neighborhood on lockdown, as we also see Travis running around the neighborhood. Christopher seems to not trust the soldiers and the “safety” they are offering everyone and he becomes especially interested in a pattern flash that he sees coming from a house deep in the “not safe” zone.

Meanwhile Travis is the eternal optimist and has become a sort of Mayor of the area, serving to help the soldiers whenever he gets called upon. In this episode, we see him get called to go talk to Doug Johnson. (Not the former Florida and various NFL teams quarterback, but it would be pretty amazing to see a guy who could throw a football through a walker as his defense. I can see him rolling up in too short shorts with a whistle, calling the walkers to him as he zips spiral after spiral into them yelling “I could have been a starter.”) 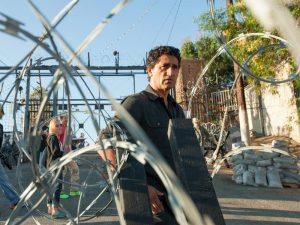 This Doug Johnson is a slovenly guy with a clean wife beater shirt and seems to be having what most of us would: a nervous breakdown. Travis tries to give him a pep talk and all seems right. But later, Doug’s wife and kids come banging on the door because Doug ran off with his classic car and the soldiers then took Doug to the hospital. The Doug situation is just one of many things that slowly help Travis start to see what others suspected much earlier: these soldiers aren’t so much protectors as they are prison guards.

After Travis had told Christopher to ignore the flashing light, Kim first listens to Christopher, then goes on the roof with the flashlight at night and confirms the signal. The next day, she cuts the fence and goes out, discovering dead bodies that weren’t infected. This sign means a ton to her and the Barber, who then explains about what El Salvador was like during the Sandinista reign in the 1970s and 1980s, in which soldiers did awful things and he seems to be reminded of that now. Kim seems to be agreeing with him.

In the meantime, we have seen Nick lie about being off drugs by stealing morphine from a man who really needed it that was being treated by Liza, who we later learned lied to everyone about being a nurse. But she is still praised by the new doctor who shows up, working with the military. 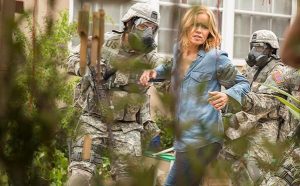 At this point, Kim snaps a bit, especially on Nick, who she knows is clearly using again and she punches him. This leads to a tender moment between Nick and Alicia, who has discovered the neighbor’s suicide note, giving herself a permanent tattoo from the design her surely now dead boyfriend drew on her and seems to be headed towards bad things, especially with a note she writes to her dead boyfriend.

All of this leads us to the final scenes in which the military come to take away the barber’s wife and Nick. And no one else, despite them being promised that the barber could go with his wife and no one thinking Nick needed to go. It is classic military incursion and ends when the doctor convinces Liza to come with her and them; after mouthing “I love you” to Christopher, she hops the humvee and rides off with the rest of them. All of this has shaken Travis, who is only more put on alert when he sees the light flashing out in the unsafe zone, only to quickly have it be ended with the muzzle flashes and sounds of machine guns.

Again, this episode was better than earlier ones in the series. 5.5 out of 10 nerds.

[divider]Review of Fear the Walking Dead Episode 104: Not Fade Away [/divider]

The pacing still seems to be an issue. Several episodes of Travis being on the side of the soldiers while everyone else in the house thinks he is crazy would be interesting. I wouldn’t want it to drag on and on but it would be nice to see it play out a little bit longer. The alliance between Kim and the barber is going to be an interesting one, as he clearly thinks that they have to go get his wife and her son.

Maybe it is wrong to characterize the soldiers as bad news from the get-go. Maybe it is the influence of so much dystopian fiction in its many forms where the soldiers never are the good guys. But clearly, these guys are no good. From the one soldier being “seduced” to get medicine to the one callously caring more about his awful golf swing than the missing Doug Johnson, they clearly weren’t meant to be trusted and that was even before they stormed the house and took away the two they did.

So what comes next? At some point, I suspect we are going to see a Red Dawn style guerilla war with former contra barber acting as the trainer and field general. Travis will follow reluctantly and Kim will very much support it because she wants to get back her son; if anyone is going to beat Nick, it is her.  But when will that happen? I suspect the end of season one could very much be a big bust out scene, either from the camp they are in, or from the medical facility that the others get taken to. And then they ride out into a strange world that picks up in season 2.

Either way, these last two episodes of season one could be really interesting and/or really rushed from storytelling standpoint. And if we have managed to hang on for this long, we might as well stick around for the end.