We’ve done it. We’ve managed to come to the end of the first season of Fear the Walking Dead. Did the season 1 finale salvage a rough start to the season? Here we go, the recap and review of Fear The Walking Dead episode 106: The Good Man.

[divider]Recap of Fear The Walking Dead episode 106: The Gold Man[/divider]

One of the many things I love about this show is its commitment to reminding us every chance it gets that it is set in Los Angeles. We open with a pan shot across the skyline that left me sad that they couldn’t manage to get the song rights to Randy Newnan’s “I Love LA” and that Kobe turned down a bit role as a really tall zombie.

When Alicia and Chris get back from the Awkward Rich People Prom of last episode, they discover everyone is packing and that they are going back to the original plan: pack what you can and head to the desert. Andy, the now tortured soldier, is asking to be spared and Ophelia is stunned to learn her dad was the one bringing terror to others and not running away from it.

We see the medical center and discover that they are scheduled to be evacuated and that a helicopter is on its way.

This is when their plan gets to be a bit smart and dumb all at the same time. Daniel the Barber releases the swarms of zombies locked up in the arena to the medical center. (Side note: what would be the most terrifying event for people to be turned into zombies? Originally I thought it would be a Gwar or Insane Clown Posse concert. But then thanks to a fever dream induced from a cold caught on a flight, I realized what it is: a Yo Gabba Gabba concert. Horrifying to think about that crowd turned zombie.) 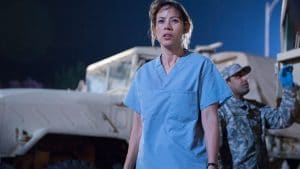 This is smart because it will occupy the soldiers and let them save Liza and Nick. But it is less smart because at some point, they got to go back through the zombies to get out. The onslaught gave us a pretty epic “Hey, we have special effects money leftover” shot of a bitten soldier running into a rear helicopter blade. It was the best walker kill all season.

As the others are looking for their friends, Chris and Alicia wind up in a scuffle with a couple soldiers. And let me say, someone on this writing staff REALLY doesn’t like, trust or believe in authority figures. Especially the last couple episodes, they are ALL bad and not even one of them proves to be a good man. (I had hopes for Andy as you will see.)

The helicopters that were meant to rescue the perishing bail out when they see the hordes leaving the doctor to have a “What have I done?” moment. It is like that time you caught yourself listening to a song and thinking “this is not bad” only to then hear the radio guy announce “that was Nickelback…”

Liza carries on and when Nick and philosopher/hustler Strand are making their escape, pausing for Strand to mock the guy he bought a key to the locks from, who is now bit. As a result, they almost get caught in a hallway. This scene was hands down the best of the season, as they used flickering lights, facial expressions and a thumping soundtrack to craft a legitimately freaky scene. Of course, they wind up getting them out and then have a kitchen fight with the walkers before making it out. 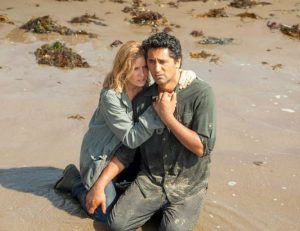 When they get back to the cars and a safe Chris and Alicia, all seems well when Andy pops up, talks some smack, aims and…shoots Ophelia. This triggers a berserker rage from Travis, which makes you think for the first time, “This guy is getting it and might survive.” They then load up into the cars, drive through LA, make jokes about LA traffic, then drive down the LA aqueducts (or else they just paid to use old footage from Terminator 2.)

They arrive at Strand’s house and it allows everyone to both admire his style and decor (I have expected the Property Brothers to show up and talk about the changes they had made) and ponder life. Nick thinks he is best equipped to survive because he is a drug addict and that is what living through a zombie apocalypse must be like. (Note to AMC: you might want to be drug testing your writer’s room. Just a helpful suggestion).

Kim walks down to the beach and encounters Liza. Liza assured Daniel that Ophelia would live but at the beach reveals that she herself was bitten. She asks Kim to put her down but Travis shows up and wastes a bullet when he really should have just kicked her off the tall cliff and let gravity do its thing.

And the setup for season two seems to be a luxury yacht that Strand points to as where they are headed, which makes me worried that we sadly won’t be reminded, again and again, that this show is set in LA.

[divider]Review of Fear The Walking Dead episode 106: The Gold Man[/divider]

7.5 out of 10. Maybe too generous but I felt the pace, the direction, the legit scares and the fact that the original is coming back next week is making me feel that way.