After a teenaged angst driven start to the series (episode 101 and episode 102), does Fear the Walking Dead have a chance to pull it together for an interesting storyline in the few episodes that it has left?

At the barber shop, Chris is having a hard time not staring at the growing scene of anarchy, as people are losing their minds. Chris begins an interesting theme of “the world falling apart means you don’t have to go back to your other family” as the riot outside moves into the shop next door, cueing the barber shop crew to make a break for it.

Back at the house, drug addict Nick is bragging about his drug knowledge as Mom is trying to regulate his pills. After hearing a noise in the house, Nick decides now is a good time to question Mom and Travis’ relationship as well; clearly, the kids are not all on board with the new found love.

As the barber shop group decides to make a break for it, we see a zombie take down a SWAT guy, which hardly anyone even notices in the chaos around them. As they are making a run for Travis’ truck, grandmotherly Griselda Salazar breaks her leg/ankle in a super-nasty way, prompting Liza to say she needs a hospital. As they near the hospital, they discover it is even worse and head for the house, as they watch power go out all over the city of Los Angeles, because this show always takes a moment to remind us that this is Los Angeles.

Where, the solution to fear has been discovered: Monopoly. Alicia calls it Kindergarten Kapitalism, which instantly became my new band’s name and they play what appears to be the fastest game of Monopoly ever. Unless you tell me that they let drug addled Nick win, at which point, I would say that is a nice family thing to do. We used to let my drug addicted relatives win at board games too. (Except Operation. You got to steady those hands, crackhead.)

While Nick and Alicia whine about waiting for Travis and how he went back for his real family, they hear more noises and let drug addict Nick take the lead, eventually letting in a dog that looks remarkably like the one that Will Smith strangles to death in the zombie film I am Legend. 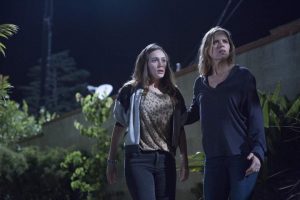 The noises and the dog barking prompt the family to remember that the neighbor has a shotgun. In the raiding of the neighbor’s house, it seems like one of two things happened: the neighbor drugged herself to death or, way more interesting, Nick killed his neighbor earlier for her drugs. It isn’t really clear, especially when her loving husband shows up later.

When Travis and the barbershop quintet show up, everyone rushes back to warn him of a zombie in the house. In the chaos, Alicia kicks Christopher in the face, making him love the new step-friends even more. But the climax is when Travis tries to talk to his neighbor, who just seconds earlier was eating the dog ravenously.

A minor shotgun blast does little before the barber takes a little too much off the top, exploding the walker’s head with the second shotgun blast. (HT: That barber joke was all @EarthNerdAdkins in the live tweet of the show and is maybe the best zombie joke of all time.)

We find out the dead man was Peter and he and Travis were probably neighborhood bros, the kind of guys who talked football at the neighbor birthday parties with bouncy houses because there is no one else around and what do men talk about besides football?

The Barber and family then reveal they have seen some stuff man, referring to fleeing El Salvador and that they don’t really have a cousin who is coming to get them the next day. 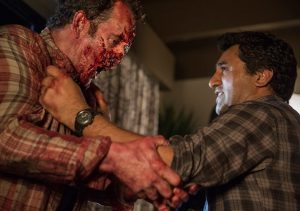 The ex-wife and new girlfriend then have as bizarre a conversation as one can have, with new girlfriend asking the ex-wife to kill her when the time comes. Kim then takes a ball peen hammer out back to whack her zombie neighbor, who used to watch kids. Travis is playing the role of the optimist, talking Kim out of doing it because there may be some kind of hope and once you go whack, you can’t go back.

They load up the next day and drug addict son is whining about his stash, and as the cars head east, Kim sees Susan’s husband come home and they rush to save him. And just as his wife is about to eat him, a SWAT-like force comes in and snipes her in the head.

There is then some discussion of who has been exposed (they lie), what has happened and how many live in the house. When we see the SWAT people put symbols on the house eerily reminiscent of symbols we saw in post-Katrina New Orleans, the barber declares “We are already too late.”

So, I have to say, this episode wasn’t bad. It was by no means good or even great but it wasn’t awful either. Let me unpack some reasons why.

This episode gets a 5.5 out of 10 nerds. It still has a long ways ago, but call me Travis, for I don’t want to kill all hope. What did you like or not like about this week’s Fear the Walking Dead?