Before I even begin this list of mine, I want to let you know that it will likely differ from yours.  And that is totally okay!  In fact, I hope it is for two reasons:

So without further ado:  My Top 7 Horror Movies (in no particular order). 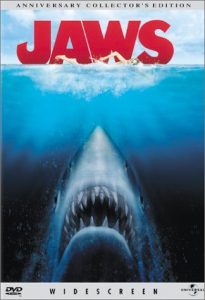 When a young woman is killed by a shark while skinny-dipping near the New England tourist town of Amity Island, police chief Martin Brody wants to close the beaches, but mayor Larry Vaughn overrules him, fearing that the loss of tourist revenue will cripple the town. Ichthyologist Matt Hooper and grizzled ship captain Quint offer to help Brody capture the killer beast, and the trio engage in an epic battle of man vs. nature.

Often I’m asked, “What’s your favorite movie?”  That is a tough question for someone like me who is a bit of a cinephile, but one title always…always…comes up: Jaws.  It is crazy to even consider a movie rated PG as a horror movie, but there is no way it would keep that rating given today’s standards.  And few movies can boast the cultural impact that Jaws can.  It literally scared a generation out of the water!  A fantastic cast makes for a great set of characters:  Dreyfuss’s nerdy marine biologist; Scheider’s play-it-safe, aquaphobic sheriff; and my personal favorite – Robert Shaw’s gritty Quint.  This movie will still make you think twice about getting into the water. 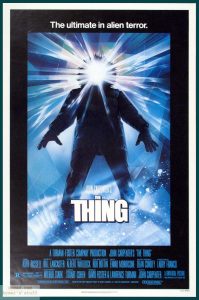 In remote Antarctica, a group of American research scientists are disturbed at their base camp by a helicopter shooting at a sled dog. When they take in the dog, it brutally attacks both human beings and canines in the camp and they discover that the beast can assume the shape of its victims. A resourceful helicopter pilot and the camp doctor lead the camp crew in a desperate, gory battle against the vicious creature before it picks them all off, one by one.

This John Carpenter classic holds down a place on my list for one huge reason:  It has gore, but the gore isn’t the star or the point.  Unlike movies today like Saw or Hostel whose “fear factor” is based primarily on what is done to the body, The Thing focuses on the mind.  It is undoubtedly a psychological horror movie at its core.  Don’t get me wrong:  They do gore well in the movie!  And what is even more mind-blowing – it is 100% practical effects.  And those effects don’t just hold up all these years later, I think they even eclipse some of the CG we’re subjected to in modern movies.  The Thing maintains tension unlike any other.  It is the standard by which I measure most movies in the genre, and the overwhelming majority fall short. 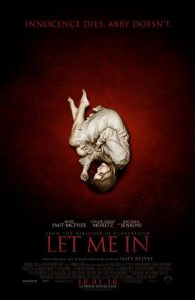 Bullied at school, neglected at home and incredibly lonely, 12-year-old Owen spends his days plotting revenge on his tormentors and spends his nights spying on other residents of the apartment complex. His sole friend is Abby, a strange girl who comes out only at nighttime. Both outcasts, the two form a strong bond. When Abby’s caretaker disappears amid a series of gruesome murders, Owen begins to suspect that she is hiding a terrible secret. (American version)

I’ve seen both versions (American and Swedish) and love them both equally.  I consider them both “artful horror.”  Even the tagline is scarily beautiful:  Innocence dies.  Abby doesn’t.  The story shared between them is really one of love, but the fear factor is still there.  Gosh, I really wish I could gush more about these films without spoilers…Just trust me on this one, will you?  The power of the narrative contained within lies in what is revealed at the end and I don’t want to ruin that for you! 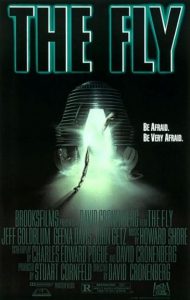 When scientist Seth Brundle completes his teleportation device, he decides to test its abilities on himself. Unbeknownst to him, a housefly slips in during the process, leading to a merger of man and insect. Initially, Brundle appears to have undergone a successful teleportation, but the fly’s cells begin to take over his body. As he becomes increasingly fly-like, Brundle’s girlfriend is horrified as the person she once loved deteriorates into a monster.

Goldblum at his best, folks.  What I love most about this movie:  Goldblum’s de-evolution.  He does a crazy good job of depicting the stages of his transformation, and the writers did a bang-up job of plotting that progression out.  It is a slow fade; starting subtly and building to a horror genre worthy crescendo at the end, but not without sacrificing the human element of Goldblum’s character.  So, so good! 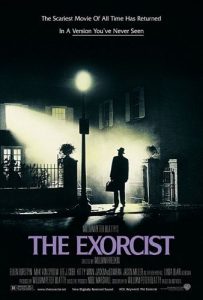 When young Regan starts acting odd — levitating, speaking in tongues — her worried mother seeks medical help, only to hit a dead end. A local priest, however, thinks the girl may be seized by the devil. The priest makes a request to perform an exorcism, and the church sends in an expert to help with the difficult job.

None of the recent exorcism themed movies hold a candle to The Exorcist.  Not.  Even.  Close.  Some of what made this movie so darn chilling was the thought of its reality.  In fact, the novel and subsequent movie were based on a true story: The exorcism of the pseudonymous Roland Doe.  But you didn’t need to know that to be scared witless as you watched Linda Blaire work.  If this movie didn’t scare you, it in the very least disturbed the heck out of you.  The scene where she runs down the stairs in the backwards crab walk still raises every hair on my head! 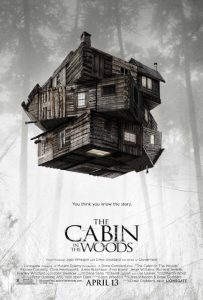 When five college friends arrive at a remote forest cabin for a little vacation, little do they expect the horrors that await them. One by one, the youths fall victim to backwoods zombies, but there is another factor at play. Two scientists are manipulating the ghoulish goings-on, but even as the body count rises, there is yet more at work than meets the eye.

Joss Whedon set out to make a movie essentially about how all horror movies are the exact same excepting whoever is the villain, and in the process he cranked out what was easily the best horror movie of 2011.  It is smart, scary, and downright hilarious as it addresses horror tropes such as the archetypal five (jock, beauty, virgin, pothead, and brains) and what possesses said group to split up in the midst of danger.  And don’t let the ending throw you.  Just remember:  We are the gods left unappeased. 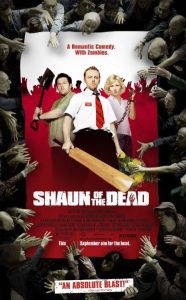 Shaun is a 30-something loser with a dull, easy existence. When he’s not working at the electronics store, he lives with his slovenly best friend, Ed, in a small flat on the outskirts of London. The only unpredictable element in his life is his girlfriend, Liz, who wishes desperately for Shaun to grow up and be a man. When the town is inexplicably overrun with zombies, Shaun must rise to the occasion and protect both Liz and his mother.

Another great horror movie that is basically a parody of horror movies, Shaun remains one of my favorite movies of all time.  Equal parts comedy, romance, and horror (A zom-rom-com, if you will.  You won’t?  Okay, I tried…), it excels at them all.  There’s also, I think, a hefty dose of commentary contained within on certain parallels between the living and the undead.  One of my favorite departures from the rest of the zombie movies out there:  In the end the zombies are incorporated into society instead of eradicated, and to humorous effect.  Definitely a must see.

So there you have it: My Top 7 Horror Movies.  Let us know in the comments which titles populate your own list and why!  We’d love to hear from you.