I recently embarked on an Alaskan cruise with my wife, her mother, and her best friend (separate rooms y’all. Calm down). But even though it was vacation, I couldn’t leave my nerdyness at home. So here’s how this nerd traveled, presenting for your reading pleasure: my Nerd Travel Log. 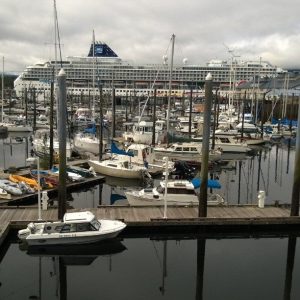 Dear diary, I am about to leave on a 10 day Alaskan cruise.  Ten days without Nerd stuff you ask? NO WAY!  I have packed a grab bag of Legos to tinker with, the second and third books from the Giver series, and my devices to stay connected (provided I have internet connection).  I honestly don’t think I could ever go completely off the grid, that’s for sure.

I finished Gathering Blue on the flight to Vancouver.  That book is a great and easy read.  It is a lot like The Giver–it could work as a standalone book, but you certainly have questions at the end.  Until I heard about the other books in the series, I liked that The Giver gave you an opportunity to continue the story with your own imagination (my review here).  Whatever happened to good old imagination?  Loose ends aren’t the worst way to end a book, provided it is done well.

Caught The Island on TV last night in our hotel room.  Man, Michael Bay did it again.  GREAT concept, terrible execution.  What was truly amazing about that movie was how flat the acting was; I expect way more out of Ewan McGregor.  Is it ridiculous to say that Steve Buscemi carried that movie?

Michael Bay makes me want to not be a nerd sometimes.

On the ship now, and I have my night stand Legos set out.  My wife thinks I am such a dork, but I told her “the preferred nomenclature is nerd,” thank you very much.  I also scoped out the movie channels and it looks like The Avengers: Age of Ultron will be playing consistently. SCORE!

Two full days at sea to start our cruise.

Highlight: Watching the second half of Age of Ultron while I did cardio in the gym.  Lowlight: I have a bit of creative block with tinkering with my Legos.  Typically this is part of my creative process but when I am blocked it can really disrupt my daily flow.  I suspect that not having my full complement of Legos at my disposal and being away from my normal environment is stifling my nerdiness.  (all my Lego reviews here, including Lego Set 60034 Arctic Helicrane) 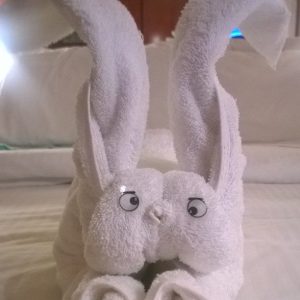 After porting and going for a wonderful hike through Ketchikan, I needed some nerd down time.  I returned to my room to see an awesome bunny made out of our towels.  I grabbed my Lego grab bag, turned on the old TV to Age of Ultron—perfect timing!—and worked on what I thought is a sweet space ship.  It is a cargo ship, but the back end detaches in case of an emergency, like an attack by space pirates.

We stopped in Juneau today and went on an air tram to a high point where we could hike again.  It was beautiful.  Though I have to say, Juneau as a Capitol city is right there with Des Moines in the “meh” category.  Luckily Juneau has a beautiful nature setting going for it.

I was running low on Nerd Fuel: Dew and Doritos. So I stocked up. I also got back in time to catch the first Avengers movie on TV.  It was good because then my wife didn’t have to keep asking about stuff that happened in the first one while we watched the second one.

We spent time in Skagway today.  Skagway actually has a lot of cool history and we went on a historical walking tour through the whole city.  Yes, all 6 blocks.  It was pretty fun though–the tour guide was like a mix of Dwight Schrute and Barney Fife.  Also, Age of Ultron was on again, meaning I think in all I have seen that movie a dozen times now, so munch so that I am tempted to change the channel to the movie about Morgan Freeman and Diane Keaton selling their apartment in Brooklyn. 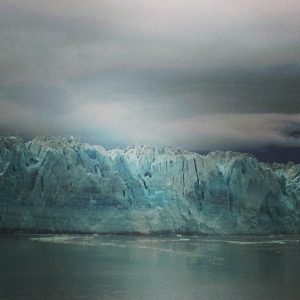 We are now passing through the Hubbard Glacier passage.  These things are amazing!  I am also learning a lot about Glaciers, like the reason they are blue is a mineral that is stored in them.  I think the lady said “adamantium”, but I’m not positive as I wasn’t really paying attention. Instead, I was thinking about how I am going to have to dismantle my Lego space ship to repack for the flight home.

We are now in Seward, Alaska for the day, then we will fly out of Anchorage.  I have all my stuff put away except the third book in the Giver series, The Messenger, and I am sure I will review those books at some point. Hopefully this series doesn’t fizzle towards the end like Hunger Games or Divergent.

Well, it has been a long time away from civilization and Nerdom.  It was a great trip, but I am happy to be headed back to my comfort zone. 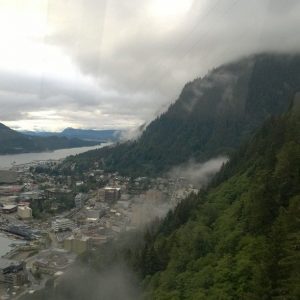 All in all it is good to get away, unplug, and relax.  However, for the nerd on the go, I like to live by 3 simple rules: