The other night we had some friends over and their daughters just flipped out over all my Legos! What was really cool was they were interesting in what some might call “boy Legos” because Lego now offers the “Friends” brand targeted at girls. But the reality is that Legos in general are great for all genders!

The girls loved Rey’s speeder and checked out the 3 in 1 sets my wife and I like to build instead of doing puzzles. However, the two sets they went the craziest over were my Harry Potter sets! 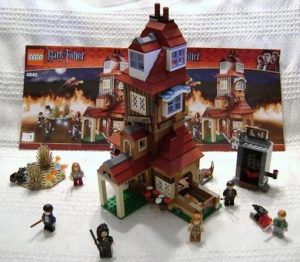 I only have two mostly complete sets of Harry Potter Legos, and how I came into them is a story for another time. I have Hagrid’s Hut and the Weasley House and today I’ll review the Weasley house. (Because it is AWESOME!)

Like I said, my set was mostly complete, so I had to improvise at times, and of course customized at times just for fun. But when complete, this set really needs no improvements.

Let’s start with the mini-figs: 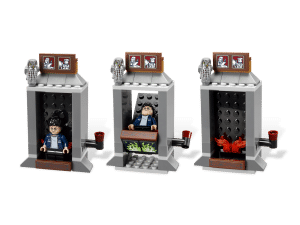 This set is based off the epic battle in the 6th movie, which the book faithful fans probably hate because it is not in the book at all. However, it is a pretty intense scene and in the end the Weasley house is left on fire.

The set comes with a catapult and some flame pieces, and I added more flame pieces as part of my customization. The catapult is on a separate piece of Lego base from the house, as is their fireplace flue portal.  The portal is sweet because you place the character in it standing, then flip it back and they go sliding and you see the bottom of the piece which has green flames on it for effect! 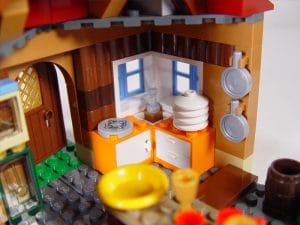 The Burrow itself is three stories of very detailed fun! The first level is the main level of the house and has the kitchen/dining room/living room area we often see the Weasleys in.

The next two levels are bedrooms. First is the twins (Fred and George) room complete with bunk beds and a treasure chest filled with socks and such. It is kind of a bummer you don’t get the twins with this set, but you can get them with the Diagon Alley set and then have them come home once and in a while. 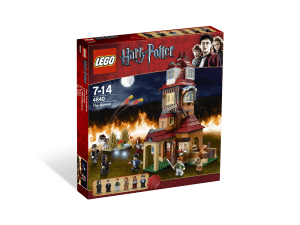 The top, and final, floor is Ginny’s room and she has a poster of Harry playing Quidditch on her wall!  I’ve had a heck of a time keeping Harry out of Ginny’s room though.

This set is just terrific and even the book faithful fans who do not approve of the scene have to admit that this set is a great replica of the Weasley house.  It has so many unique details that capture the essence of the burrow!

This nerd gives the set a 9.0.  The only downfall of this set is that it is harder to come by as the Harry Potter Legos are currently out of mainstream circulation. That doesn’t mean you can’t find it for a pretty good deal. If you spot this set for under $100, BUY, BUY, BUY!