I love Legos. But what you probably don’t know is that I also love a good deal! I frequent local thrift stores in the off-hand chance I can score something sweet. I have an in the box Dick Tracy figurine, a handful of comics and great books, and…I have scored a bunch of Legos!

Typically thrift store Legos are just grab bags of random pieces. However, once in a while you can make a big score. Well, I have had about as good a month as you can have after scoring two vintage Lego sets: Sets #6256 and #6561 in the original boxes, with all the parts and instructions! Normally, that in and of itself would be a score worthy of 1,000 words of epic poetry.

The Imperial Star Destroyer was sans mini-figs and instructions, but for $60 I just couldn’t pass it up! Besides, I have plenty of mini-figs to man the Destroyer with, and thanks to this helpful site, it’s no instructions, no problem! 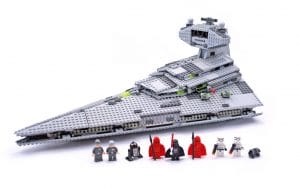 This Star Destroyer came in its original box partially put together and partially not so much, though I took most of the intact pieces apart to give them a good dusting anyway. And well, the previous owner was nothing of a master builder. He or she put things together upside down and backwards. I’m thinking it was probably someone that fell in that “suggested” 9-14 age range.

I was saving this project for winter time, but as I make my way through the Thrawn triology that Clave lent me, I just felt the Imperial Star Destroyer calling to me like the dark side calls out to Sith. Well, low and behold, I had the place all to myself on a Saturday and I took out the set and began construction.

The Imperial Star Destroyer Lego Set #6211 is huge! 1,366 pieces to be exact, making it the biggest set I have ever built. After building a few hours I wasn’t able to finish as I was one piece short on one of the main hull sections. Luckily, I have bins full of random parts and it was a fairly common piece that I was missing. I dug around and found the wing piece. 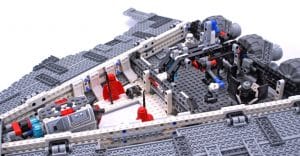 The ship was completed.

The command bridge can all detach, and that is how you open up the main section of the hull. You can also slide the back part off of command center so that you can place your mini-figs in there without detaching the ship from itself. 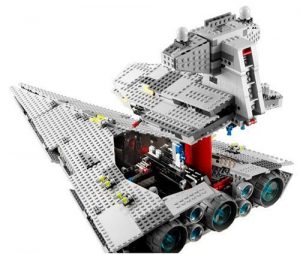 All in all this is a very cool set, and since this is the older version, I am sure the newer version has plenty more cool details.

So having to rank this on our Nerd Scale I give it an 8.8. It is a terrific set, but it also brought me to a sad reality: Star Wars Legos are not to scale.

When the Suburbs Meet Sim City: A Review of Suburbia

Comic Characters You Should Know: Jesus From The Walking Dead