When the Suburbs Meet Sim City: A Review of Suburbia

When I say the word “suburb” what pops into your head?

Or maybe I’m just thinking back to my childhood since I totally grew up in the suburbs.

Now, when I say Suburbia what do you think of? The same things as above? Not for people who play board games. When I first heard of the game I thought, “Wait, do I really want to play a game where we act like #basicwhitegirls and drive to Starbucks and go to PTA meetings?”

But you don’t do that!

Now, let’s go back to the word association. When I say Sim City what do you think of?

Placing buildings?
Seeing your city grow?
Setting disasters loose on your city to see it crumble to the ground?

Or was that just me? No, I know every kid and teen that played that game did that. (My favorite disaster was the monster, by the way.)

Now, combine those two words and the images they produced. And you’ve got Suburbia.

[divider] A Review of Suburbia [/divider] 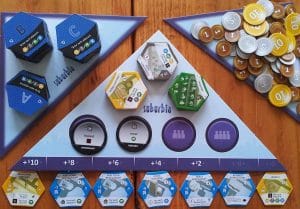 You start with no income but 1 reputation. And there are tiles in front of you that all players can buy. You’ve got some suburbs you can build, a park, a factory, even a lake. You place these tiles to make your area of town the best and gain income and reputation.

But there is a catch.

Of course there is. This is Suburbia!

It’s a game of give and take, really.

You have rewards that come with building certain things as well. Like if you build an airport, you get a certain increase in income and reputation for each other airport built, not only in your part of town but in other parts of town as well. So, when I built the international airport, those other two regular airports in my friends’ areas helped me out. It was awesome!

Now would you like to hear about another catch? Of course you would!

You slowly gain points by gaining reputation because your population increases. If you are popular, people want to live there! Makes sense, right?

However, the more people that move in, the harder it is to get money and keep a great reputation. Once you hit a certain number of points every time you increase, you have to lower your reputation and income. And it hurts. One turn caused me to have to lower it by three. So I didn’t get as much money my next turn. I wasn’t happy. But neither was my town.

It gets pretty brutal. I built a stadium just so one of my friends couldn’t. He didn’t need it but he really wanted it. I said, “Nope” and grabbed it first. On the other hand, he got money every time someone built a suburb. He was rolling in the dough for the longest time.

One of my friends built a land field next to her suburb. Not a good decision. It lowered her reputation drastically. Because…well, for obvious reasons. I can just picture her citizens sending letters to her saying, “What were you thinking? It smells horrible over here now!” She regretted that move almost immediately.

I didn’t win the game. My part of town was not the best.

The guy that did win won very well. It was close. I believe he won by four points. I was in the lead for a bit but then when I placed a freeway, it caused me to grow too quickly and I had to knock my reputation and income down those three points like I mentioned before.

My friend is the Suburbia King. For now…

I need a Pumpkin Spice Latte to get over the loss. I need to be that #basicwhitegirl just like my suburban town.

Marvel Comics: What is the Serpent Society?