Well, it is time for my final installment of Nash’s Lego review (parts 1, 2, 3, and 4).  I want to thank the Earth Nerds for allowing me to be featured on their awesome site for a handful of posts—I can’t wait to see what else they have in store for us fellow nerds.  I never miss a weekly recap of The Walking Dead by Jason, and love when Clave, Michael, and Jason make their lists of Super Heroes, which always take me on a long, nostalgic road down memory lane!

Now down to brass tacks.  This post is about the crown jewel of my collection, my pride and joy: Lego Set 7965 Millennium Falcon. 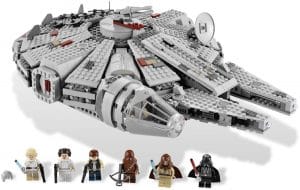 While these minifigs are terrific, the Millennium Falcon itself does most of the talking.  9-year-old Nash would’ve been amazed at what Lego came up with for this set, especially compared to my dozens of attempts as a child watching Star Wars on a Saturday afternoon.  My replicas always ended up looking too blocky and dull, but this Falcon has the sleek rounded look that is so uniquely the Millennium Falcon. 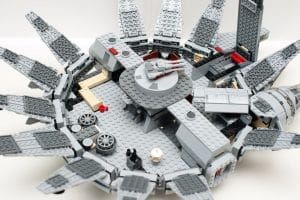 Like other Star Wars sets, the Falcon is comprised almost completely of common Legos.  The cockpit glass piece is unique to this set, but other than that, I think everything else is a common Lego that could be found in anyone’s miscellaneous bin (though without the instruction manual, I doubt you could recreate this one).

They may not have captured EVERYTHING about the Millennium Falcon in this replica, but everything they did capture is priceless, from the removable smuggling floor boards, to the chess board area.  They have beds, tools, many computer screens and engine parts to fix.  They also nailed the gunner silo and added plenty of discolored panels to give it that piece of junk feel.

Admittedly, I don’t get the old girl down from her spot on the display shelf enough to pla…er, uh, admire it.  Oh screw it, I still play with Legos, OK!  And it’s a no brainer with this set, because the Millennium Falcon is awesome.  What I like about this set is that it opens up with many separate flaps for ease of playing.  You can choose to open all the flaps and use the entire inside of the Falcon, or you can open certain sections so that you can close them and quickly be in flight mode, which is ideal because the Falcon often needs to make a quick get away! 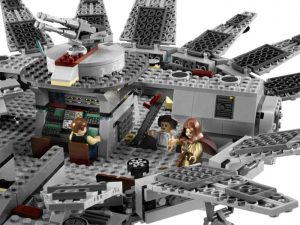 The Lego Master Builders did a superb job with this set and I really cannot imagine that the Death Star or Imperial Star Destroyer are better put together, just larger.  (Although both of those are on my major wish list, of course.)