Zombies are real, I’ve seen one.

Before you think I’m crazy, I need to explain that I’m not claiming I saw the undead walking. During one of my travels to Haiti I saw a young women who was alive certainly, but I guess the best way to describe her is to say that her lights weren’t on.

Far as I could tell, she wasn’t responsive to much stimuli of any type, save to follow the tug of the hemp rope that was loosely tied around her waist. The tug of the rope came curtesy of a man who local Haitians confided in me was a Voodoo (Vodou) priest.

I came to learn that Vodou priests historically have made an intentionally visible spectacle of their “zombies” as a means to influence and manipulate the peasant class in their favor. The zombie serves as a frightening reminder of “do what I say or this could be you next.” No one wants the Vodou priest to turn them into a zombie, so they do what the Vodou priest says.

I can testify; it’s chilling. If the Vodou priest would’ve to told me to drop and give him 20, I would’ve on the spot.

Look, what I saw was 15 years ago for a brief moment at twilight and from a distance, so I’m not looking to make wild claims here, and I could very well be having a Brian Williams moment for all I know. I’m just saying that I saw something or someone that defied easy explanation and gave me goosebumps like I’ve never had before.

And since I have a science degree the experience was a difficult one for me process. So upon returning home I read 14 books in order to try and get to the bottom of my Voodoo experience.

As a result, I learned a lot about the real-life history of zombies. Considering that zombies are the preeminent horror monster of the 21st century and saturate nerd culture, I figured I’d share the real history of zombies with you. 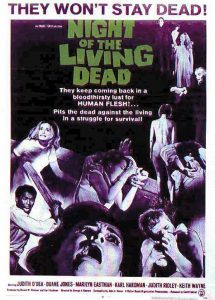 To understand zombie legends, you need to look no further than Haitian Vodou (Voodoo), which mashes up African traditions with European influence. In the 1600s, French traders and pirates began kidnapping West Africans in order to transport them to their Caribbean colonies as slaves for the sugar plantations. Coming from a mixture of ethnic groups, these West African slaves began to combine their various religious folklore and beliefs.

The French tried to suppress this mixture of African religions by forcing a conversion to Catholicism, but the result was simply an adoption of Catholic saints and patrons into the existing Vodou pantheon of spirits. The resourceful Haitians formed it into an underground religion, using all the influences.

The core is this: Bondye – the Haitian Vodou creator god – is thought to be distant, not intervening in human affairs. Instead, Haitian Vodou priests invoke the spirit loa, who act as intermediaries between Bondye and the mortal world. Communion with loa takes place in wild, quirky ceremonies that involve costumes, rum, and tobacco for the particular loa, who is believed to possess the Vodou priest.

But we haven’t gotten to zombies yet. While many Vodou priests are thought to deal primarily with benign loa, there is another type of Vodou priest – the Bokor – who is known to practice both light and dark, communing with more malevolent loa.

How to Create a Zombie

But if you really want to create a zombie like a bokor would, you need to brush up on your alchemy skills, or toxicology, to be accurate.

Wade Davis is a Harvard anthropologist and ethnobotanist who explained the creation of zombies in his book 1985 book The Serpent and the Rainbow, that was also turned into a Wes Craven horror flick.  Wade came to understand that the “zombie” is actually a living person who’s been drugged with a kooky, poisonous cocktail, an ingredient of which is extract from a puffer fish. This chemical cocktail makes the living person appear dead. 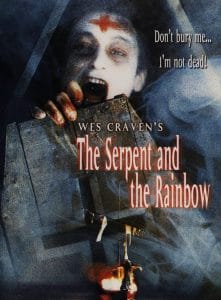 The bokor “resurrects” the zombie from the grave, and the poor sod – having had their noodle scrambled by the puffer fish cocktail – “rises” as a zombie. The illusion is maintained via hallucinogenic drugs, which both render the zombie suggestible, while also giving them the blank-eyed catatonic state.

The Serpent and the Rainbow is a wildly fascinating book, should you ever want to read it for yourself.

Of course, maybe Davis missed the mark in researching the origin of a true zombie. Others have had competing explanations, such as Haitian zombies are actually homeless and mentally ill persons, and the susceptibility of the human mind is enough to perpetuate the illusion. That could’ve been all I saw during my experience in Haiti. I certainly didn’t stick around long enough to find out.

In any case, Haitian peasants don’t so much fear zombies as they fear being turned into one. This is especially troublesome considering Haiti’s history of being enslaved. This is called back by the zombie-as-slave-to-the-bokor symbolism. It continues to give vodou priests power, so they in turn continue to perpetuate the legends. 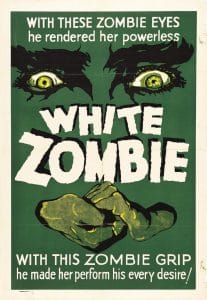 Overall, zombies are a fairly minor part of Haitian culture. In fact, many of my Haitian friends can’t recall actually ever seeing one, despite being well versed in the folklore. But the zombie stories have appealed to American visitors. Haitian zombie legends are exotic, ghoulish, and frightening – in other words, just the type of fascination that landed them in Hollywood.

From the Bela Lugosi film White Zombie to George A. Romero’s 1968 classic The Night of the Living Dead, each new Hollywood expression of zombies has only added to or tweaked the zombie lore.

The irony is that the 21st century is owned by the zombie, but the modern style has very little in common with a real-life Haitian zombie. I guess you could say that zombies have taken on a life all their own.