All of us at some point are going to be disappointed. We are going to be let down. Some great thing that we love is going to try and jump genres, make the move from the page to the screen and it won’t just be the same.

Some of the properties have been major where we have seen this happen; for all the hope that the Lord of the Rings fans had,The Hobbit series proved to not live up to the hype. But it is most disappointing when it is something that doesn’t have the magnitude of critical claim in one form as it moves into another one. It is one thing for Harry Potter books to make it to film; but what if the property is smaller?

In June 2014, M.R. Carey released the novel The Girl with All the Gifts. Now, Carey is known as a writer in a variety of mediums, having written written for both Marvel and DC in the superhero comic book genre, as well as novels, both attached to the comic book world and in independent universes as well. When the book club at work choose this book, I had no idea who Carey was, his connection to comics or what the story was about. But I loved it.

The Girl with All the Gifts is set in a near future where something has happened to the world; a majority of people have become infected, becoming zombies while a small remanent remain, attempting to save the world by finding a cure. The titular girl in the story is Melanie, who is part of an experiment at an army base where she and those like her are being educated but also treated as experiments. Needless to say, something goes wrong and the story progresses from there. 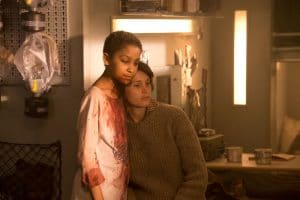 As I said, I loved the book. It expands and builds a universe and a metaphor about the world’s ending and a new beginning in a way that I found captivating and intriguing. When moments came where I felt like I knew what would happen next, there would be a change that I didn’t anticipate.

I loved the way it used characters to serve as the narrators, with us hearing the story from their perspective. In part, I listened to the audio version of the book, so even more so that format worked. So when I discovered that a British film group had made a movie in 2015 and released it in America at the beginning of 2017, I was excited. 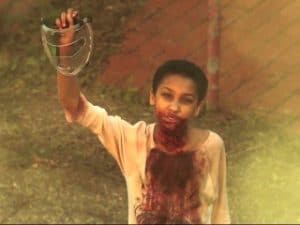 And the film version of the story doesn’t do the book justice. In retrospect, I should have known that there would be issues. The narrator POV being translated to film is difficult; it is one of the reasons that I think the Hunger Games trilogy doesn’t get enough credit. (The novels work almost entirely on Katniss’ narrator voice and we never hear it in the films!) In this film, it just makes the story harder to follow.

Additionally, the film didn’t have a massive budget, despite having cast Glenn Close as the lead scientist studying Melanie and it shows. It feels like a well made piece of British television more than it feels like a great action science fiction film. And there is just so much that is left out in the script. I recognize that every script based on a novel has to make choices and certainly, to turn this book into a 2 hour movie, choices would have to be made; it felt like the choices they made unwound the central ongoing metaphor to the point that it blunted the considerable impact that the book had.

As a reader of the book, it isn’t that the movie is bad. (In fact, it boasts a pretty substantially high Rotten Tomatoes score). It is just that the story of the novel was so much better as a story and a metaphor that it made me disappointed in the film that came out of it. My best hope is that the movie will drive some people to check out the glory that is the novel and soak in its greatness because the film alone isn’t enough.

A Video Introduction to X-Men Gold #1