“It is a truth, universally acknowledged that a zombie in possession of brains must be in want of more brains.”

So starts Pride and Prejudice and Zombies, the movie and the novel.

The idea isn’t new. Take a piece of fiction and add to it. People have been doing it since Sherlock Holmes first appeared in a novel. These days it’s called fanfiction. I write it. I read it. I love it. I don’t get paid for it. At least not with money. I get reviews and showering praise from nameless people on the internet.

But recently, in the past decade or so, people have been taking works of fiction in the public domain (meaning it is up for grabs to edit and embellish) and tweaking them just a bit.

And thus Pride and Prejudice and Zombies was born.

Take a Jane Austin book (her best in my opinion) and add some zombies. That’s essentially it. The original book and story is still there…but with zombies.

“Mr. Darcy watched Elizabeth and her sisters work their way outward, beheading zombie after zombie as they went.”

“Elizabeth lifted her skirt, disregarding modesty, and delivered a swift kick to the creature’s head.”

Guys, picture Elizabeth Bennet killing zombies with her sisters with swords and muskets. In period dresses and hairstyles. And speaking in the refrained why all Austin and Bronte heroines do.

No need to fret, dear readers. Hollywood has done a marvelous thing. A movie just came out based on this fantastic novel.

You have the basic novel/movie there. The Bennet family is close. Five daughters, two parents, a few servants. Mrs. Bennet dreams of her daughters finding rich, perfect husbands. Mr. Bennet wants his girls to be happy. And the girls…well, each girl is different. But our main character, Elizabeth, dreams of other things.

“I shall not give up my sword for a ring.”

She’s smart, witty, and an amazing fighter. Mr. Bennet had his girls trained in China in martial arts and weaponry. Why?

Well, it began with the Black Plague…

There, now you see exactly what I’m talking about.

“But, Jennifer, is it any good? It looks kind of ridiculous.”

I laughed so much.

The Bennet sisters are talking about how rude Mr. Darcy was while sparring.

Lady Catherine (played by the gorgeous and amazing Lena Headey) shows up at the Bennet’s estate and spars with Elizabeth while telling her to stay away from Mr. Darcy. She, of course, insults the size of their property. She also has an eye patch. 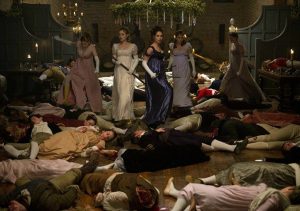 I honestly did not know what to expect of the movie. I love the book (the original and zombie infested one) and love the many movies of the original, the newest one with Kiera Knightley being my favorite.

I did not expect to be so entertained and thrilled with it. I cooed at the cute scenes (Jane and Mr. Bingley are so adorable), rolled my eyes at how frustrating Mr. Darcy can be, and cheered when the Bennet sisters sliced up some zombies.

I went with some friends and one of my friends dragged her boyfriend along. He has never seen or read Pride and Prejudice.

He was thoroughly entertained. I looked over at one point and he had his head thrown back and was laughing very loudly.

Read the book. (You can get it here!)

Or just do one.

But you won’t be disappointed. In fact, I will end this with a last little quote from the novel. One of my favorites, in fact.

“The creatures were crawling on their hands and knees, biting into ripe heads of cauliflower, which they had mistaken for stray brains.”