After last week’s episode, we delve even deeper into the Alexandria Safe Zone, as we still need to see how some of the others are adjusting to the new home. Will this episode reveal it?

We open on Gabriel, back in his priestly garb, and he goes from preparing to repair a torn page in the Bible but seeing fresh strawberries from church lady Rosemary sets him off. (We will come back to this at the end.)

Noah meets with Deanna’s husband and wants to learn about architecture, saying he is in this for the long haul. Reg also gives him a journal and the task of becoming the town historian.

We get to see more of Noah, as he is going on a run with Aiden, Eugene, Tara, Glenn and some other guy.  They are hunting for parts that Eugene needs to repair the power grid at the settlement. After Eugene tries to get out of it, he still goes and when they arrive, they divide out at Glenn’s command in order to make sure there is a safe way in and out of the supply warehouse.

Eugene and Tara are a duo in this process and again, he talks about how unready to kill he is and how much a coward he is when Tara tells him it is time for him to start pulling his weight.

Inside the warehouse, Glenn again shows how much experience he has discovering walkers stuck behind a fence.  Eugene finds the parts he is after as Aidan encounters a soldier zombie, complete with body armor. After kneecapping him and essentially stopping the threat, Aiden shoots once more, hitting a hand grenade on the walker soldier.

In the aftermath of it, we see Aidan run through with rebar. Tara is unconscious, bleeding from a head wound. Eugene is unable to shoot to protect her but Noah and Glenn are able to save them. And when they realize that Aidan is still alive on the rebar, they go back to help.

In the midst of trying to free Aidan, some key things happen:

As Glenn, Noah and new guy flee, they wind up in a revolving door surrounded by zombies, which is by far the best dilemma they have used this episode. Glenn and Noah are in one part and the coward is in the other. They are stuck for a bit but Eugene rolls up in the van, blasting the dubstep, clearing away some of the walkers. Glenn wants to break the glass on his side, clear the area in front of the door and then save the coward. But the coward bails, and in the midst of it, Noah dies in what is the most horrific death this season. 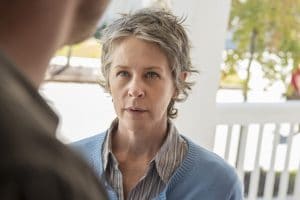 But Glenn gets up and comes around to find the coward trying to force Eugene to leave them. I was 100% Eugene was going to kill the coward but Glenn just pummels him. As a viewer, I still want blood.  They are then rolling back in the van with Eugene looking at Tara, still unconscious.

While all this has been happening, the Rick-Jessie-Pete triangle advances. Jessie has a owl that was broken.  We learn from Carol’s baking lessons (against her will) with Sam that something is off. Carol seems to “know” that Pete is harming Jessie and maybe Sam too. When she tells Rick, who has had conversations with Jessie and Pete, Carol is sure the only way it ends is by Rick killing Pete. 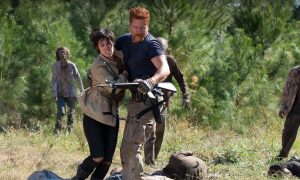 Elsewhere, Abraham is working on a construction crew led by Tobin, when zombies hit. Francine (new?) manages to get separated and is being overrun. Everyone else bails but Abraham, who proceeds to save the day. Afterwards, Abraham takes charge of the crew and they start getting stuff done. Tobin goes back to Deanna and explains that Abraham should be in charge. Deanna seems reluctant but after Tobin leaves, Maggie, who seems to be assigned as Deanna’s executive assistant, assures her that Abraham knows what he is doing and that is why Deanna wanted them there.

But later Gabriel shows up and begins to tell Deanna that Rick and his crew are bad people, demons disguised like angels. Maggie overhears him but we don’t see what happens next as the episode ends.

I give this episode a 8.5, with a full 1 point deduction due to Gabriel at the end.

Next episode we are going to see more about Deanna, who will discover her son is dead. Will she blame Glenn and crew? And at what point do our survivors quit getting promoted? And with two episodes left, does all hell break loose before the end of the season or is the close of the season Rick and Carol trying to get rid of Pete’s dead body?