Nerds on Earth feels it’s high time we reclaimed the phrase “nerd alert.”  For far too long, it’s been used to ostracize people, simply because they may have spoke of dragons, played turn-based card games, or watched Doctor Who.

Instead of pointing a finger at a person, we want to point at some cool stuff our fellow nerds may enjoy.  Posts tagged ‘Nerd Alert’ are our attempts to alert you to some of the hidden, new, or downright awesome items in the loot crate that is nerd culture.

Lest I confuse you, I’ll just share the official marketing copy:

Set 97 years after a nuclear war has destroyed civilization, a spaceship housing humanity’s lone survivors sends 100 juvenile delinquents back to Earth in hopes of possibly re-populating the planet.

But that’s just the beginning, and if you binge this show on Netflix, you’ll be struck at how quick it moves. Major characters are knocked off (conveniently during sweeps season, of course), new characters are added, and major plot narratives pivot faster than Ross Geller’s couch. [Boom! I just dropped a reference from 1995. Take that, CW Millennials.]

Without getting spoilery, below are some of the major groups of people on The 100:

The above characters and settings make for great sci-fi action. And I think it’s the world building that is the real strength of this show. Based on a book by Kass Morgan, the show is creatively brought to the small screen. It’s full of interesting worlds, setting, characters, sets, costumes, and curiosities. 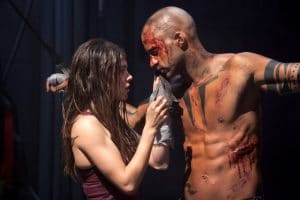 But the show isn’t without problems.

First, it’s on the CW, so it comes with that beautiful people veneer that is obnoxious about network TV. Even the gritty parts look polished, but this is a minor ding. Overall, it’s well done, and I can’t complain much.

It also has the network TV tendency to turn everything into a dramatic-love-triangle-will-they-won’t-they scenario. Certain scenes feel forced into being all kiss kiss smoochie smoochie. But it’s not over the top, and honestly, it works most often to create a nice sense of drama and tension among characters. And they are all quite pretty.

But if it’s not a love triangle it’s a struggle for independence from a parent. Lives will be hanging in the balance and there are a couple characters who are all like, “Whatever mom! You can’t tell me what to do!” Then they stomp off, slam the door, and turn up the Imagine Dragons. OK, not really. 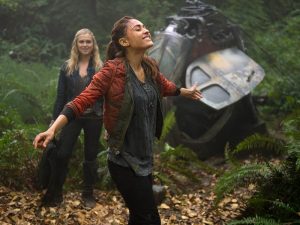 They actually inject their dad with a bone marrow treatment, but that won’t make sense to you until season 2. My point is that a lot of the interpersonal conflict stems from the younger folks struggling to find their independence from a parental figure. Again, this show is on the CW, so there you go.

Finally, the area I have the most issue with is how characters can often seemingly change drastically from one episode to the next. The playful peace-maker one episode previous is suddenly capping a guy in cold blood. But I cut The 100 some slack here as well, and I’ll tell you why.

The 100 is great at putting characters into tense, dramatic situations for the purpose of exploring how they’ll act when push comes to shove. No show is better at this – in my opinion – than the Walking Dead, and fans of that show might like The 100 as well.

Characters are living in grey areas and it can be jarring when a character suddenly adopts a darker hue, but the show also moves quickly, not letting storylines feel stagnate. For that reason, I cut the writers some slack. Ultimately, it’s entertaining as heck. Despite my cranky criticisms above, I look forward to this show. 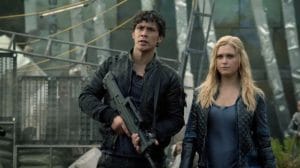 It’s legit sci-fi, yet it contains zero superheroes. There is also not a zombie to be found, nor is there a vampire in sight. That’s rare in this day and age, so get in while it’s hot.

Look me square in the computer screen and tell me that you’ll at least give The 100 a shot.