I’m still reading my way through the Marvel Encyclopedia: Updated and Expanded Edition and presenting to you, the faithful reading public/fellow nerds, five entries that caught my eye.  The highlighted entries may have piqued my interest, raised my eyebrow (that’s right: just the one – the left one), or just made me laugh.

I’ve broken the rather voluminous book up into manageable chunks, thus far covering A through F, G through M, and now humbly submitting to you N through Smythe, Professor after finding it necessary to split the S entries in half.

Her abilities are described as such: “Mutant whose feelings 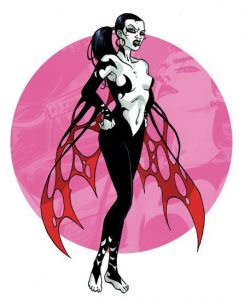 of hatred for the world and humanity in general endow her with superhuman strength, agility, and durability” (pg 252).

Thank the Lord this mutation isn’t rampant, amirite?!  Could you imagine a world in which road rage endowed your opponent on the road with superhuman abilities?  And God help DMV employees…

One of the several characters mentioned as a member of some team (Psionex) but robbed of his own entry, Mathemanic’s power is explained as able to “project math into others’ heads” (pg 279).

I really want to hunt down some issues in which he appears, because I’m curious to see this power at work.  I mean, does he stop opponents in their tracks by projecting debilitating quantum physics equations into their minds?  Does he himself know the solutions to said problems?  Is he teased mercilessly and given wedgies?!

“Reptil can fully transform into any prehistoric animal, such as a dinosaur” (pg 291).  This might be the first entry that I’ve read and had a desire to read into for reasons besides “this just seems silly and I’ve got to see how it works.”  And wouldn’t you know that I started reading Avengers: Academy right before discovering Reptil in the encyclopedia. 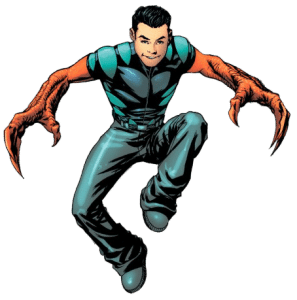 It’s a power set that appeals to the kid in me.  What kid isn’t at some point fascinated by dinosaurs?  And for me, my interest is compounded by The Mighty Morphin’ Power Rangers, whose magical, dinosaur-themed power-coins imbued them with superpowers and enabled them to summon giant, mechanical versions of their reptilian (at least at first and as far as I’m concerned…) spirit animals that they could assemble into a single, anthropomorphic robot with which they battled all kinds of nemeses.

Yeah – I still want that.

Rocket has recently experienced a more widespread notoriety, but I just want to highlight a sentence in his bio that might be the single most fantastic sentence ever composed: 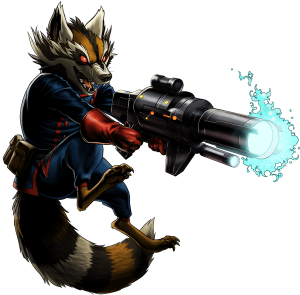 “The Hulk arrived and helped Rocket and his first mate Wal Rus (you’ll never guess what he is) rescue Rocket’s girlfriend, the evolved otter Lylla, from the evolved mole Judson Jakes” (pg 297).

Just let the overwhelming evolved-animalness of that sentence wash over you.

Another character whose powers/abilities summation made me chuckle:

I, for one, am glad that someone stepped up and intervened in Winston Manchester’s (real name) life.  Workaholism (thought I just coined a new term, but alas…) is no joke.

1) The dude does not exactly have the looks of a ladies’ man (feast your eyes, ladies.)

2) That the word “claims” is used made me laugh.  It’s listed under his powers/abilities, but it sounds questionable at best.

Dr. James Power and Arnold Roth whose powers/abilities are both listed as having the “strength of a man his age who engages in minimal/mild (respectively) exercise” (pg 271 and 300).  At Nerds on Earth, we’ve tossed around the idea of composing lists of characters we think we could take in a fight.  These two now rest atop my list.

I’ll wrap the encyclopedia up with Snarks through Z soon, so stay tuned!

12 Physical and Personality Traits for Your D&D 5e NPCs

Comic Haul: Marvel KEYS for Sale Plus Some Golden Age!