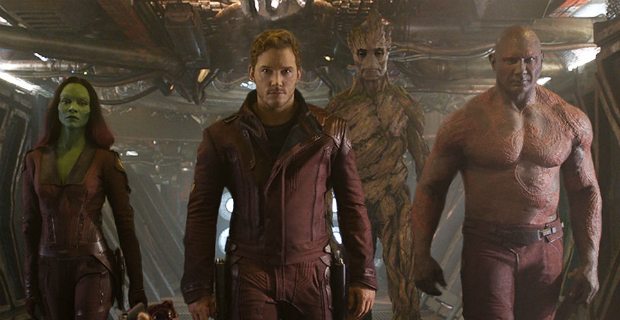 At some point the leaders of the Marvel cinematic universe are going to make a mistake.  Some movie of theirs is going to not work, be a flop and not be critically acclaimed. It is going to happen.

Many of us thought that the obvious choice was the movie that seemed like a reach when it was first announced, The Guardians of the Galaxy.  It had a lot of reasons attached that made it the likely candidate: unknown characters, the cosmic storyline, the lack of wider cultural knowledge.

And yet, as it is now obvious: The Guardians of the Galaxy is not the first flop.

Earlier I had the privilege of seeing some early footage that you can read about here.   From that I made some predictions and was curious about the rest of the movie.  Here are some of my thoughts having seen the final film.

There are really no missteps.  I am sure to some degree that they tweaked the role of Star-Lord to better match Chris Pratt’s skill sets but he is a great lead and does good work.  Additionally, the main characters are all well done, including Drax the Destroyer, who I was worried would be the weak link in the cast as he was portrayed by wrestler Dave Bautista.

There are no real weak performances.  The only notable thing about the casting that is odd is using high level names and actors in smaller parts, like the barely seen Benecio Del Toro as the Collector and Glenn Close as the leader of Nova Prime.

The biggest difference between this film and the Avengers is that Avengers was the closing part of stories told over several movies.

The Guardians of the Galaxy story had to be self contained, move quickly and tell the whole story.  Director James Gunn deserves accolades for managing all the pieces and still making a film that is comedic and action packed.  (It should also be noted that having Joss Whedon, maker of the killed-too-soon Firefly television series as a consultant on this film doesn’t hurt.  I mean, if they had named the ship Serenity, it would have been a little bit too obvious. The Firefly influence is obvious but not overwhelming.)

The more I have thought about the soundtrack, the more I realize how genius Gunn is for how he used it.  By giving Star-Lord through his back story a connection to music of the 70s and early 80s, Gunn is able to give audiences a connection point. 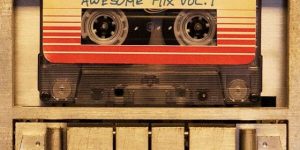 Yet he smartly used music that is known but not overplayed.  Imagine if the scene detailing the attack plan was set to something more iconic that the Runaways “Cherry Bomb”.  It could have been a distraction; instead it serves to launch the scene, hold it together and help make the film better.

It is a very clever cinematic piece that I am not sure that Gunn is getting enough credit for.

Without a doubt, these two characters are ones that fans of the comic series worried about a general audience seeing.  So to take these two and turn them into the Han Solo and Chewbacca of this film is stellar work.

Bradley Cooper does great work to make sure that when you hear Rocket you don’t hear Bradley Cooper.  And the Vin Diesel line of “I am Groot.” works well as a comedic device throughout the movie.  It is truly impressive to see how they managed this and made these some of the best characters of the film.  (And the drunk, sad, angry Rocket confession scene is truly moving and gives the needed balance to understand his backstory.)

The Howard the Duck thing…not so much.  I hope this means at worst we will see 5 minute Howard the Duck film on the DVD.  Because it is inconceivable to think they can make a full length feature of that work in any way.

Marvel Strike Force: Left to Your Own Resources