It took me a bit longer to pass my eyes over the weird Marvel comic characters for letters G through M in the Marvel Encyclopedia than it did for letters A – F.  I mostly blame the ridiculous number of entries that read “Living[blank],” “Man-[blank],” “Master or Masters of [blank],” and “Mister [blank].”  Good Lord…

What follows are the five entries from this stretch of the alphabet that caught my attention for the very reason of never before having come to my attention.

And just to be clear: I’m a greenhorn when it comes to comics. Most of what I share in these posts will have its context squarely and solely from the encyclopedia’s contents.  Think of these entries not as an expert comic nerd critiquing the information, but rather as a complete comic noob’s reflections and conjectures on what’s presented.  That’ll put you in the right frame of mind!

Under The Headmen entry, you’ll see this bio for Shrunken Bones, a member:

“A biologist and biochemist, experiments on own body led to skeleton shrinking, but not skin.” (pg165)

Couple of points to be made here:

1) Probably one-fourth to one-third of this entire encyclopedia would not exist if people (most often scientists…so presumably smart people) did the wise thing and opted not to experiment on themselves.  Be a villain (or backed by the government – looking at you, Dr. Abraham Erskine) and experiment on others, or be like most scientists today and play with mice…but stop playing with yourse-…er…quit using yourself as a test subject.

2) This dude might be the saddest looking character yet.  He seriously looks like Droopy and there’s no way he doesn’t talk like Droopy, too.  Not with the jowls this dude is rocking.

I’m just going to let the following picture (specifically the description of each member listed in the left panel) speak for itself: 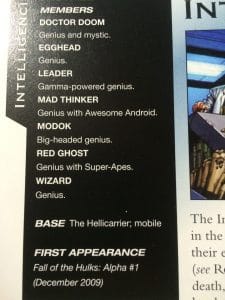 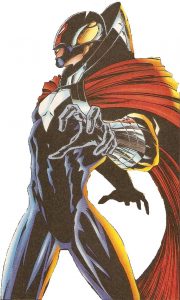 Master of the World

First off, this dude might have the most presumptive and boastful name yet.  He was setting himself up to fail with a name like that.

Secondly, it says he has “plotted to take over the world, often starting with Canada…” (pg 232, emphasis added).  Because of course you’d start with Canada, amirite?

This actually kinda makes him smarter than most of the other would-be conquerors throughout this encyclopedia that have targeted super-hero-dense cities like New York.  I mean, Canada has Alpha Flight in British Columbia, but there’s a whole lotta Canada that isn’t BC and isn’t “covered” by a hero or heroes.

The only trouble with conquering Canada first is the fact that no one in the rest of the world would be quaking in fear of you.  They’d be all, “Meh, its Canada.  I could conquer Canada.”

I’d actually read some of Husk’s stuff before and am familiar with her power set.  In case you’re not, she “can shed [her] skin and transform her body into any form with similar or less mass…frequently [turning] her body into a different substance, such as steel or stone…” (pg 171).

Remember Damage Control – the guys who clean up after “super-powered conflicts?”  I suddenly feel sorry for them.  I mean, I don’t love picking the shed skin of a two-foot-long snake up out of my flower beds.  These poor saps have to pick up the discarded outer layer of a 5ft 7in, 127 pound human being.

And according to her wikipedia page, she can shed multiple times.

A significant portion of the encyclopedia’s entries are of obscure, but uninteresting or unoriginal heroes and villains – guys and gals who have power sets exactly like several other ho-hum, forgettable characters or very vague power descriptions like “enhanced strength” or “some fighting ability” (see Millie the Model on pg 238).  That said, picking five out of the bunch that stand out, are interesting, or pique my curiosity is tougher than you might think it to be, so here’s a short list of some of the more lazily-named characters to grace letters G-M to add to the names I listed in A-F:

M – Real name: Monet St. Croix.  Maybe Marvel’s creative team had a bad case of writer’s block before a deadline and instead of assigning her a cool alias they just hit the Delete key fourteen times and called it a day.

When I wrap letters N-T, the third installment will hit the internets!