Our very own @EarthNerdJason gifted me the updated and expanded Marvel Encyclopedia for Christmas. It boasts info on over 1,200 comic characters and teams in the Marvel Universe. You want obscure Marvel comic characters? This book’s got them!

When they say ‘expanded’, they mean it. This sucker weighs in at over three pounds!  Full color pages, alphabetically arranged bios, Mister Fantastic sucker punching Doctor Doom on the cover…this thing isn’t just for reading, it’s for display.

But I am reading it; working my way through a letter of its contents one day here and one day there.  And with so many characters covered, there were bound to be a few worth compiling for a chuckle-worthy (although that claim itself might be some hubris on my part) list here at Nerds on Earth. 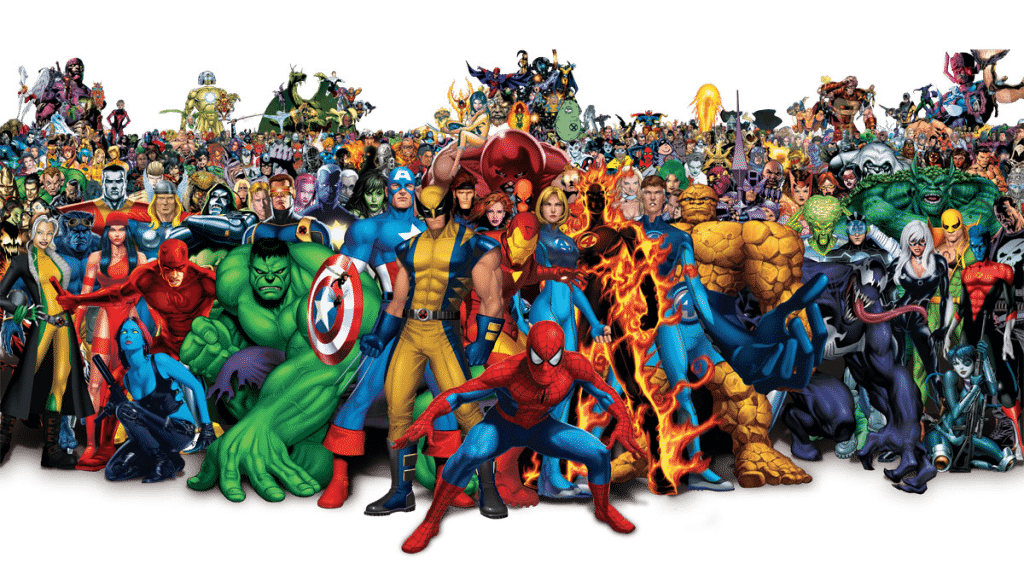 Disclaimer: I’m such a greenhorn when it comes to comics…Most of what I share in these posts will have its context squarely and solely from the encyclopedia’s contents.  Think of these entries not as an expert comic nerd critiquing the information, but rather as a complete comic noob’s reflections and conjectures on what’s presented.  That’ll put you in the right frame of mind! 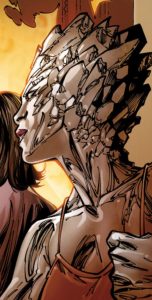 First off:  that exclamation point is not something I added to her name.  That’s exactly as it’s listed, which means you can’t call her name without a bit of inflection at the end apparently.  And my only comment on Bling! stems from a somewhat sadistic, utilitarian perspective.

Her entry explains that her “bone marrow can produce diamonds, which can protect her skin or be fired at foes” (57). I wouldn’t send her into the field at all.  I’d keep insisting she needed to improve her projectiles’ accuracy on the range and come in behind her with a push broom, sweeping up that bling.

Its not that the X-Men ever seem to hurt for money, but she’s a walking conflict-free diamond machine.  Can you say “bankrolled?” 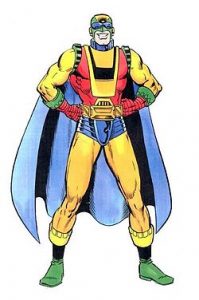 One of seven – yes, SEVEN – characters in the encyclopedia with the title “captain” affixed to their name.  To be honest, I was surprised that number was so low.

Anywho, his ridiculous costume aside, I jotted his name down because listed under Special Powers/Abilities is “has a great sense of humor” (78).  I’d like to think that qualifies me as somewhat super. And you can call me ‘Captain.’

“Damage Control is an engineering and construction company that specializes in cleaning up and repairing property damage caused by super powered conflicts” (98).  This book has cited many “super geniuses” like Amadeus Cho, Centurius, Egghead, and Mister Fantastic, but whoever’s behind this business is more than deserving of an entry in my opinion. 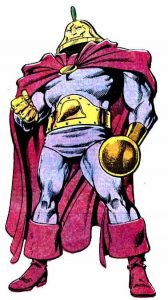 2) I could have told you that without looking at him or his listed first appearance.

3) He’s literally a handbell whose clapper is his hand.  The guy has to punch himself in the face to activate his powers…

4) He was bested by Howard the Duck.  I don’t know much about Howard, but I do know that Doctor Bong (one of nine Doctor *blanks* in the encyclopedia) isn’t exactly going to include that confrontation on his resume. 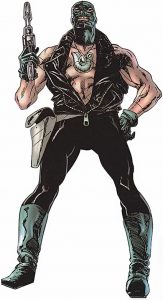 A paralyzed man has his legs restored by a revivalist preacher and becomes a crazed, vigilante zealot.  No powers whatsoever…just gets his hands on a ray gun and starts blasting “immoral fools” (136).

And there wasn’t just one of these guys.  One goes down and another succeeds him.  I don’t have any particular commentary on this; just surprised that such a character exists.  He’s like Punisher, but with a religious motivation.  And clearly Marvel subscribes to the Mitch Hedberg school of naming things:

“I want to get a job as someone who names kitchen appliances. Toaster, refrigerator, blender…. all you do is say what the #$%* does, and add “er.”  I wanna work for the Kitchen Appliance Naming Institute. Hey, what does that do? It keeps @#$^ fresh. Well, that’s a fresher….I’m going on break.”

That’s just the tip of the iceberg.  And don’t get me started on the way they consistently call a thing exactly what it is:  Iron Man, Spider-man, Red Skull, etc.

I’m not saying its broken or that I could do better.  Just pointing out the pattern.

Be sure to check out further strange entries:

The Pros and Pros of X of Swords, the X-Men Summer Event