In this, the fourth and final installment of five obscure, odd, or weird marvel characters from the pages of the massive Marvel Encyclopedia, I present four laughable entries and a fifth whose power intrigues me.

First up: Space Phantom.  According to his Special Powers/Abilities information, he “can change his appearance to look like any living being.”

Oh, yeah?  And so he chooses to look like this?

During the course of these posts, I’ve called attention to a few laughable submissions for powers.  One of my favorites was Captain Ultra’s “great sense of humor.”

question has the strength of a male or female their age that engages in minimal or mild exercise. (PS: I’ll tell you about my favorite of all the listed powers in this encyclopedia below, so stay tuned!)

And then there’s Morgan Starks entry, which doesn’t even grant him that.  Under Special Powers/Abilities it simply reads “none” (pg 349).

I’ve now read the 1,200+ character bios in this book, so forgive me if I’m incorrect in my recollection when I say that I do not think anyone else in this book has “none” listed so definitively.  Golly, even Aunt May has “amazing cook” (pg 265) listed.

I’m not even going to touch on her name.  Too easy.  I want to talk about her listed power: “Teleportation, which makes her narcoleptic” (pg 379).

Well, that at least explains why it looks like she’s wearing X-pajamas and nursing a cup of coffee.

The wording suggests her teleportation causes the narcolepsy. 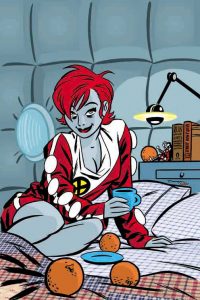 How did this play out in the comics though?  Was she only good for one jump before she was out like a light?  And a narcoleptic strikes me as a humongous hazard on a battlefield.  If Professor X knew of this (and I mean come on…he’s a telepath.  How could he not know?), putting her anywhere near danger is downright irresponsible on his part.

Not only could she end up dead, but the others having to constantly make sure she isn’t catching zzzzz’s would be distracting or one of your heavies ends up with her slung over one shoulder while engaging in the fight with the other hand.

Varua is the proud(?) owner of my official favorite power of any of the entries in this book.  And really its mostly because I’m a 6th grade boy at heart sometimes and this made me giggle.  You see, Varua has the ability to “generate the Blue Flame” (pg 385).

Can I in good conscience…No.  No, I can’t in good conscience direct you to Youtube the words “blue flame fart.”  That would be churlish and immature of me, and we here at Nerds on Earth try to keep things classy.

A character not granted her own, separate entry, Butterfly’s name and powerset makes an appearance in the side bar of X- 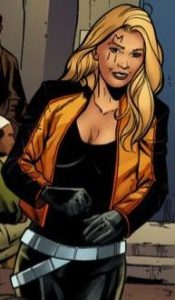 Factor as a Notable Member.  Her power’s description, albeit brief, intrigues me: “Instinctively understands causality, and creates a desired effect through a small action” (pg 413).

Playing off the idea of the butterfly effect for a power (and a name, duh) is a cool idea with a lot of potential.  She could do something seemingly pointless in the heat of battle and completely turn the tide in X-Factor’s favor.  Plus, it would make her one heck of a prankster.

Well there you have it:  My Cliff’s Notes of the Marvel Encyclopedia.  If you missed A-F, G-M, or N-Smythe, you should double back and catch them!

As for me, I’ll be retiring this fine volume to my coffee table in the den; prominently and proudly displayed.  As I worked my way through it, I resurrected characters long dead and forgotten by passing my eyes over their visages and reading their stories.  Well, not like death means anything in the Marvel U…