Many people consider Chris Perkins to be pound-for-pound the best darned Dungeon Master alive today. Either Mr. Perkins has immense natural talent for story-telling, improvisation, creativity, and cartography or he made a soul pact with an illithid, granting him mind control powers that allow him to mentally manipulate us all. 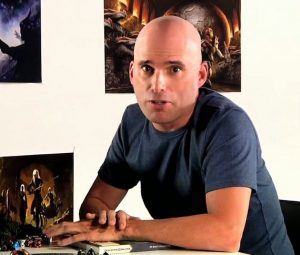 Assuming it’s not mind control, Mr. Perkins’ great talent is that he can build elaborate settings full of interesting and memorable NPCs, twisting and evocative storylines, and rich, detailed environments. In other words, Dungeons and Dragons awesomeness.

Up until now, these settings have always been a part of Mr. Perkins’ homebrew campaigns or settings designed to playlets new rules versions of Dungeons and Dragons.

But could a Chris Perkins campaign setting be on tap for the masses?

All clues point to yes. In fact, displaying the master showmanship befitting the World’s Best DM, Mr. Perkins coyly teased his work via his personal Twitter account. Some samples: 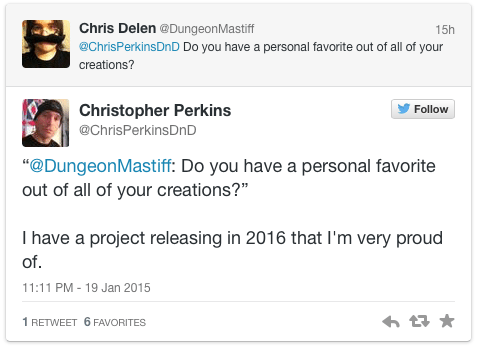 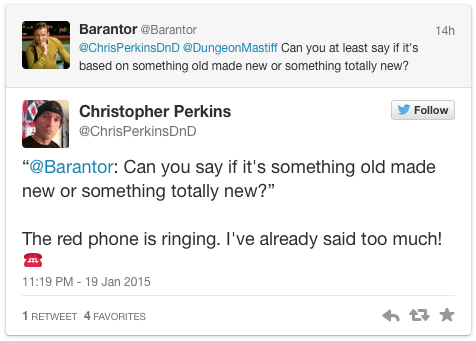 But what would the logical options be if Chris Perkins were to be writing a D&D campaign setting? Well, there are realistically 3 options, all of which are homebrew settings that Mr. Perkins created and ran as part of play testing groups for D&D edition releases.

The least likely option is a setting that Mr. Perkins created way back when for D&D 3E, called Arveniar, a setting that featured a city in the sky. I didn’t know much more about that, so I asked him:

“@EarthNerdClave: Did you ever post your Arveniar campaign bible online anywhere?”

Nope. My 3E campaign exists only as a series of binders.

Let’s take a quick break to talk about me for a moment, because that’s what I like to do.

I asked Mr. Perkins about Arveniar because I wasn’t aware of it until I began to research this post, and was surprised not just by the name of Mr. Perkins’ campaign setting, but also because it featured a city in the sky.

The reason I was surprised was at that time I was 4 pages into a draft of a campaign setting of my own. It is a setting that features a city that – through Gnomish magic – floats in the sky. But here’s the kicker: The name I had chosen was Avenair, picked because the font I’ve been using to write the setting is called ‘Avenir.’

Crazy coincidence. But that’s enough about me.

Iomandra is named after Io, the creator of dragons. The word “Iomandra” is Draconic word, which is significant because the setting is ruled by the dragonborn.

Iomandra is a watery world sprinkles with islands of every size and ecosystem. Trade routes ruled by the Sea Captains connect the islands, but countless more have yet to be explored. And, of course, beneath the sea lies the remnants of ancient, sunken empires and the treasures of the ages. Mr. Perkins has written extensive about Iomandra in his popular (and brilliant) DM Experience column.

I’d give this setting a puncher’s chance to some day be published. Wizards of the Coast is not a non-profit organization, and as a result want to make money. Pirates and sea themed properties make money. This is true in RPG land, as evidenced by the popularity of Paizo’s Skull and Shackles pirate(y) themed campaign setting for Pathfinder. 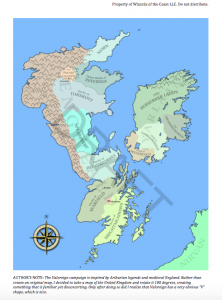 If Arveniar is a long-shot, and Iomandra plausible, then Valoreign has to be the odds-on favorite.

At the close of his farewell post of the DM Experience Mr. Perkins linked to the Campaign Bible for Valoreign, the setting he’d be using to playtest D&D’s 5th Edition rules.

It’s very Arthurian in it’s general tone, but with those classic Chris Perkins twists like the presence of Fey Magic and Elven firearms. It’s very cool and I encourage you to click the link above and give all 16 pages a read.

Which Campaign Setting is Chris Perkins Working On?

Wizards of the Coast isn’t going to employ someone like Chris Perkins to be their Senior Creative Manager, only to hide that talent under a bushel basket. At some point that little light will be let to shine, and my hunch is that we’ll get our first glimpse of  an official Valoreign D&D campaign setting in 2016.

The Walking Dead Episode 509 Review: What Happened and What is Going On