The Walking Dead Episode 509 Review: What Happened and What is Going On

After a holiday break, The Walking Dead episode 509 “What Happened and What is Going On” comes back to remind us that it is the best serial storytelling on television.

You can look here for a quick recap of the heartbreaking last episode: Coda.

(I just re-watched that episode and a thing I missed: Rick’s absolute swagger and how it just dies with Beth. And such a terrible strategically awful move to take Noah into that room with you. Still rolling it around in my head. Also, there is a growing theme about slavery that runs through this show’s later seasons, especially with the Atlanta setting that I need to write on more about later.)

Then episode 509 happened, which is aptly named: What happened (to this show) and what is going on (with the total weirdness of this episode?)

Of course, spoilers ahead.

I am going to do a quick recap of the episode and then dive into why is maybe the worst episode of the series so far.

We start off with some odd lens flares, enough so that I thought JJ Abrams was maybe guest directing.  There is a burial happening. Flashbacks with Beth. Gabriel pronouncing a funeral.  We see pictures of twins, some still shots that made me wonder if the director’s kid was enrolled in a photography class.  Then after seeing Rick choose to follow through with delivering Noah to his Richmond, Virginia home, and we get blood falling on a drawing of a home. 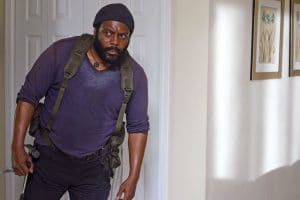 When we come back, we see a first line team.  (Strategy error: a first wave strike team that doesn’t include Darryl is a HUGE mistake,)  Tyrese, Noah, Rick, Glenn and Michonne are cruising along and ditch their SUV as they get close to Noah’s neighborhood.  Along the way, Tyrese tells Noah the story of listening to the radio with his dad and always having to listen to the worst stories because of what his dad called “the high cost of living.”  When they get to the neighborhood, they discover it has been long ago overrun.  (Though, side note: someone has been keeping up the lawns.  Even on the burned up houses.)

As they divide up and start sweeping for supplies, Noah runs to his house and quickly discovers his dead mom. Tyrese wanders around and finds one dead twin and while staring at pictures of the twins (that we saw at the beginning of the episode), Tyrese gets bit by the other zombie twin. Badly. Turns out it is his blood that we saw fall earlier on the nice picture of the house. Noah takes a model plane and Top Guns his kid brother zombie in the skull and then runs for help.

After a bit where Glenn, Rick and Michonne are trying to figure out what to do next, they hear Noah’s cries for help and go assist him, but only after discovering the broken wall and random body parts surrounding it.

However, Tyrese is in full hallucination mode.  He sees the white guy from the cannibal factory that he didn’t kill.  He sees the two girls that were shown the flowers awhile ago.  He even eventually see the Governor and Beth sings him a song.  And in the midst of it, he is bitten again by a different zombie.  By the time the crew shows up, he is hallucinating, listening to a radio, coming in and out of consciousness, even as they remove his arm, fight their way back to the SUV and try and save him.  He dies and it turns out the burial that we see at the beginning was his, not Beth’s.

So, this episode was terrible.  It reads like a spec script from someone with a marginal liberal arts degree who is trying to be fancy pants and explain that really, all of life, even life in this terrible place is just a circle.  And it fails spectacularly. 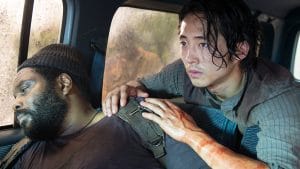 When this show is at its best, I imagine the great Southern writer Flannery O’Connor being on its staff and making it great.  This episode was like it was written by William Faulkner.  And while, like his works, there are people who will greatly defend it, it was dumb and not worth a lot of artistic merit. Faulkner is the guy everyone thinks they should like and no one really does. That is how this episode feels.

The story being told out of sequence.  The flashbacks.  The hallucinations.  All of it probably seemed on paper like a reasonable idea.  But it didn’t work.  The end of the episode had me feeling like this show now thinks that every end or beginning of a half season has to have a meaningful death and they wasted a character that wasn’t my favorite for the sake of telling an artsy story that really only moves the plot forward a bit in that we now know that they are probably headed to Washington, a hundred miles away.

This is 3 out of 10 Nerds.  And honestly, the 3 is only because I have missed the show.  I don’t think the season isn’t salvageable from here but they need to mix it up and soon.  If the ominous foretelling is that the next big hurdle they face is their own pessimism, this is going to be a long, ugly half a season. There is only so much of the team sitting around and being emo that I can take.