A friendly reminder: I went into this new show with some serious hopes and a few fears.

And after this first episode, I am very afraid of the next 5 episodes of Fear the Walking Dead.  Various people who had seen screeners had said that the show wasn’t good to embarrassingly awful. And they aren’t wrong. 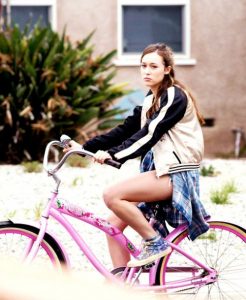 The show cold opens with Nick waking up in a church that has been converted into a drug den. As he walks along looking for his friend Gloria, he sees a piano stuck in a stairwell and some blood. He doesn’t immediately assume this is a middle school lock-in gone bad, which was disappointing to me.

He eventually finds Gloria, who is our first walker, eating some other guy. He runs away, eventually getting hit by a car. (The prevailing theory at Nerds on Earth is that the car’s driver was desperately trying to change the song from Creed song that was playing, because Nick looks like he belongs in a Scott Stapp look-a-like contest).

From here, we run into a few things:

The story hinges on Nick, who eventually busts out of the hospital, where he had been strapped down. He runs, buys a burner phone, calling who we eventually find out is his friend Calvin. (No teenager in this world has another teenager’s phone number memorized anymore!) 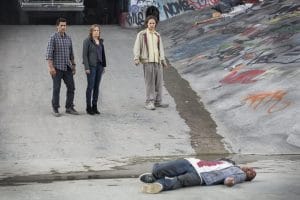 We had met Calvin earlier when Madison and Daniel were looking for Nick, with the impression being given that Calvin had been in rehab as well, only was doing much better.  Eventually, Calvin and Nick meet up, we learn Calvin is Nick’s dealer and Calvin is worried Nick blabbed.

So we get the equivalent scene of “Look at the flowers” with Nick about to be killed by Calvin in a Los Angeles aqueduct, and we know it is LA because they did a wide shot of LA about a dozen times in this 90 minute episode. I was pulling for Calvin to survive because I think it is a much more interesting story but Nick overcomes him, Calvin gets shot with his own gun and dies.

When Daniel and Madison come to get Nick, Calvin is a zombie and gets run-over repeatedly with their Ford truck by Nick. And at the end, they stand and watch Calvin’s mangled body still try and get up.

So, this first episode is terrible. 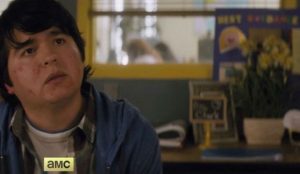 I genuinely can’t decide if the choice of characters is worse or maybe just the whole setting. Maybe the first show luckily stumbled into the fact that watching the world fall apart isn’t very interesting, especially when we all know where it is going. The teenagers are terrible, headed for a dystopian future that made me joke “Welcome to the first annual Hunger Games.”

I really want to like this show but when you find yourself pulling for the erstwhile protagonist to get shot in the climactic scene, it isn’t working. I hope that in the next 5 more episodes they are able to right the ship and tell some better stories. It will be interesting though, due to the fact that the whole series is in the can before any critical commentary was made.

This gets a painful 3 out of 10 nerds. If it gets better, I will be the first to cheer loudly but for now, it isn’t worth watching.