Hopes and Fears of the Walking Dead

When AMC launched the now massively successful television series The Walking Dead, no one really knew what to expect. It allowed the showrunners at the time to take risks, learn and adapt. If you haven’t watched season one lately, it is worth a repeat view as you can see the cast and crew start to really figure out what is happening as they are creating one of the most successful shows on television.

Fear the Walking Dead doesn’t have that luxury. The task given to these folks is completely different and a challenge. This show is going to be held up to the current level of success of its predecessor and its creatives just aren’t going to be given much of a learning curve. So with that in mind, here are some of my hopes and fears for the first season of Fear the Walking Dead.

Many of my hopes are built on the little bit we know about the show that has been released to the media. For starters, the show is set in a different time and place. It is the same world as the original show but it is set on the west coast and is set at the very beginning of the zombie apocalypse. Those two big changes allows this show to explore what the original didn’t.

Fear the Walking Dead can be about what happens when the world is falling apart. Because of Rick’s coma, the original show started from the position of what happens when the world already had fallen apart. And they can be vastly different stories. So I am hopeful that Fear the Walking Dead tells the falling apart story instead of the fallen apart story.

And I am hopeful that this series works with a balanced cast from the get go. It wasn’t a mistake to focus on Rick so much during the first series but it took them awhile to build out a fuller ensemble with much more interesting stories. And it let’s us as viewers see what people were like before the collapse of everything. In the original show, much of the time we are left wondering what people were like. It has taken them awhile to learn how to shape stories that show that in The Walking Dead and in this series they get to do that from the get-go.

But, as hopeful as I am about this series, I have some of my own fears. First and foremost, don’t explain the why or how of the zombies. One of the best things that ever happened to the original series was the Center for Disease Control destruction. It took off the table the thing that could become the focus: how did this happen and how do we reverse it?

That might be interesting in a short form movie but it isn’t something to build a whole show around long term. It can create too many entanglements.  And I fully anticipate seeing the CDC researcher on some news channel during the fall of the world, which leads me to my next fear. 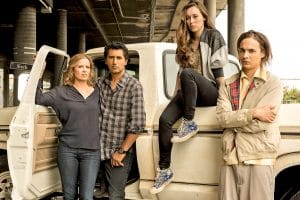 Crossovers would be terrible for this show. Now, we hear that because of the distance and time differences, the show won’t do any crossovers. It sounds like “same world but different” has been the mantra from the show from the beginning. But I fear the need to fan service the crowd.

I don’t want to see a “Our dead beloved Beth sings on YouTube” scene or interviews with Shane about the shooting of Rick or the standard Wal-Mart redneck parking lot interview with Meryl. It would be easy to do that but it wouldn’t help the show tell a story. It would just be cheap fan servicing that won’t sustain a new show or build a new perspective on the fallen world.

Lastly, I fear the casting of the new show. There are a lot of younger characters in this show and historically that hasn’t ended well. While there is the occasional sleeper hit like the CW’s The 100, teenaged casts have killed many a good show in this genre. (I’m looking at you Revolution and you Terra Nova.)

I am not sure how much I want to see teenage angst and zombie killers together. The story and actors involved are really going to need to bring their best efforts. The original series made huge leaps forward when it took its weakest piece and started doing a series of buddy cop adventures: Carl and Michonne, Carl and Darryl, etc. The teenage curse shouldn’t be as scary as the zombies.

So what are you excited about the new show? What do you worry about happening in its first season?