I love the anti-hero. Straight up do-gooders just don’t scratch my itch most days. I don’t know if its faulty wiring or what, but I’ll take a bad guy with a little good in him or a good guy with a little bad in him over a card carrying Boy Scout any day.

Some of the anti-heroes out there are motivated by dollar signs:  They’re good when it pays or they’re bad when it pays.  But occasionally you’ll run across an anti-hero that is only painted so because of the choices he or she makes.  In the pursuit of good, they make utilitarian choices that cross some moral line and place them in the gray, at best.  They’ll take down the villain, but they’ll put him in a coffin instead of cuffs.  That sort of thing.

I’m not writing in defense of such choices.  While I do think the gray areas make for more intriguing story lines (see Remender’s X-Force), I’m writing to tell you that I’ve finally read one that pushed the envelope even for me.  Superior Spider-Man proved to be an interesting 30+ issue thought experiment that has my gears a’turning around the question ‘What makes a hero a hero?’

Superior Spider-Man was born from a fascinating concept:  Doctor Octopus managed to switch minds with Peter Parker and vowed to maintain the arachnid alter ego in a way that would put Parker to shame. He would be better…more efficient…some other synonym for “improved” that is somehow eluding me…

Parktavius (patent pending) – in a very Patriot Act-y move – creates spiderbots that “Big Brother” the city 24/7, reporting all manner of criminal activity to him.  He even builds an army of minions to aid in the curbing of said crime.  He holds the notion that might coupled with invasive surveillance and corporal (and even capital) punishment is the key to eradicating crime.

Parktavius is quip-less, but effective.  Crime plummets because this new Spider-man carries a big stick.  Killing is not out of the question for him, and word spreads.  It is all very Machiavellian.

But Octavius’ hubris transfers as well, which proves to be a good thing in minor matters like science and invention, but ultimately proves to be his downfall.

Believing his technology to be just as superior as his crime fighting, he is blind to the Green Goblin’s hack which programs the spiderbots not to respond to any crime involving a goblin mask.  The Goblin is then able to amass an army of his own and overthrow New York.

The pressures of heroism prove too much for Octavius who admits the genuine Peter Parker is the required hero and cedes control just in time for the real Spider-Man to set things aright.

So much of what made Superior so right was so wrong.  It is as if the writers took a strictly utilitarian approach to heroism to the limits.  Parktavius is cold and calculating, making him extremely efficient and effective.  While you can certainly argue with his methods, the results are harder to refute.  I wouldn’t say Parktavius is a hero, but he certainly achieves a hero’s end, right?  The whole time you’re reading this run, you’ll constantly be asking yourself if the ends justify the means.

Listen, this Spider-Man isn’t making any friends, but he’s getting the job done. If you remove the 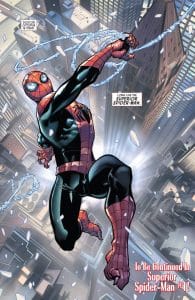 hubris, his model is sustainable and successful by measure of its crime-curtailing.  What makes this run great is this tension!

You hate him because you know he’s a villain at heart (or in mind) and he’s not your classic “friendly neighborhood Spider-man.” At the same time, Parktavius is measurably successful to a hero’s end/purpose.  So is he superior…?  That totally seems to hinge on your definition of a hero.  If your definition involves such phrases as “role model,” “morally upstanding,” and “personable,” then no.

The run seems to be of the perfect length.  It ran its course well and did not go one step further, in my opinion.  You know going in that it is a gimmick with an expiration date, but as I said above, the experiment is a challenging one.

Coming in at just north of 30 issues (all volumes available at Amazon), it is a worthy read for those willing and able to overcome their inviolable love of Spider-Man “classic.”  Make the comparison between Parktavius and Peter as you read!  That’s what the book is designed to do.  It is totally expected of you to guffaw at how different the two are, but don’t let that turn you off of the series.  Embrace that discomfort!  It is what gives the whole experiment life.

I give it 8 out of 10 nerds primarily because of the thought-provoking aspects of the run.  So much of it had me simultaneously experiencing conflicting emotions and perspectives as I read.  Who am I rooting for?  Should I be rooting for them?  Who is the superior Spider-Man?  Decide for yourself by giving this run a read.

How to Hide a Smuggler in the Star Wars Galaxy