I’ve gone to Dragon con for a few years now and I have dressed up each year. But it wasn’t until this year that one of my cosplays really had people stopping me left and right. (Not to brag but a few friends and I were featured in a cover photo for a Geek & Sundry post on the best cosplays of Dragon con 2015.)

As a result, I thought I would write an article that answers the reoccurring questions of Dragon Age fandom, the process that goes into picking cosplays, and much more.

[divider] “You looked really cool. What were you?” [/divider] 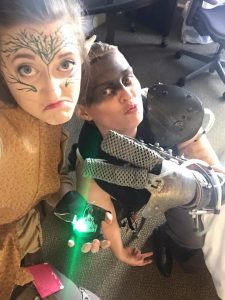 Thank you everyone for the compliments! I was my Mage Lavellan Inquisitor from Dragon Age Inquisition (but in the picture featured in Geek & Sundry, I was bunny version of my Inquisitor with some 2 other amazing dragon age bunnies and my friend as mass effect Shepard bunny). People who play Dragon Age are thinking of all the responses to go along with that while others remain oblivious. So let me explain.

Dragon Age Inquisition is a part of a Bioware game series that focuses on fantasy such as dragons, knights, mages, elves, dwarves, etc. In this game you start out with your main character who, spoiler, becomes an Inquisitor when things hit the fan.

When choosing your character you get to choose what class, race, gender. For my second playthrough I chose

Each Inquisitor depending on what class and race you pick gets a background story and family lineage. The elf Inquisitor comes from a Dalish clan, Lavellan, and the clan is lead by a Keeper. They like to wander around in the wilderness away from humans and search for restoration of Elven culture.

My inquisitor was also a mage which made her the “First to the Keeper” in her clan. It’s almost like having a super awesome apprentice.

I could talk about this all day, but I might lose some of you in too much lore. But if you’re interested in the Dragon Age lore, hit me up in the comments and ask away!

[divider]“Why did you pick that character?” [/divider]

I got this question from people who were big fans of the game series and along with people who had no idea what the character was. When I come up with cosplay choices, I usually go with characters I relate to personality wise, or I pick people who have personality traits I wish I had.

I love picking strong female lead characters because that’s exactly what I strive to be. I would like to take on any challenge life throws at me like my inquisitor and not even hesitate at the sight of it.

My Inquisitor was also a more personal character rather than a pre-designed character from the game. In the game you get to customize what your Inquisitor looks like, what kind of vallaslin they get, what armor they can wear.

Also you get to choose what they say. Are they more serious, more aggressive, do they associate with Andraste or their many gods? As Inquisitor you get to ultimately decide the fate of your game. So I went with a character I personally customized and I got creative with it and tweaked things a little. All in all it was a fun experience.

[divider]“How did you make it your stuff?” [/divider]

To be honest, one of the biggest elements to my cosplay was the Enchanter vest that looked like dragon skin and I had a friend make it. I originally planned to make it, but I was not up to taking on the task of learning how to sew just yet. It turned out great!

The under shirt that resembles the Skyhold pjs was probably the funniest one to explain how I went about making it. Mostly because of how last minute and janky it sounds. Undershirt is a khaki blazer I found at Goodwill. I “tailored” it to fit a certain way to look more accurate. The funny part, The Inquisitor Skyhold pjs have these distinct gold buttons. I looked around places for similar looking buttons, but none really suited me.

Last minute, I used my guitar pick puncher and punched out guitar picks made out of old expired gift cards. I shaped them up, and then used hot glue on top to make the swirled detailing. Spray painted them gold. Sounds completely tragic, but I actually got compliments on them. 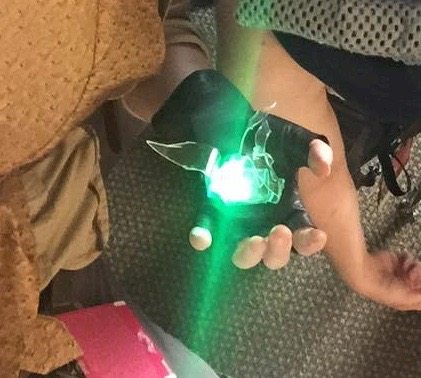 Also the Inquisitor has an “anchor” in their hand. I got questions about how I made it as well.

The one I have been seeing pictures of was my Bunny Inquisitor.

Yeah, it actually is as simple as it looks. (The two lovely ladies in this picture were also featured in the Geek & sundry post with me.) 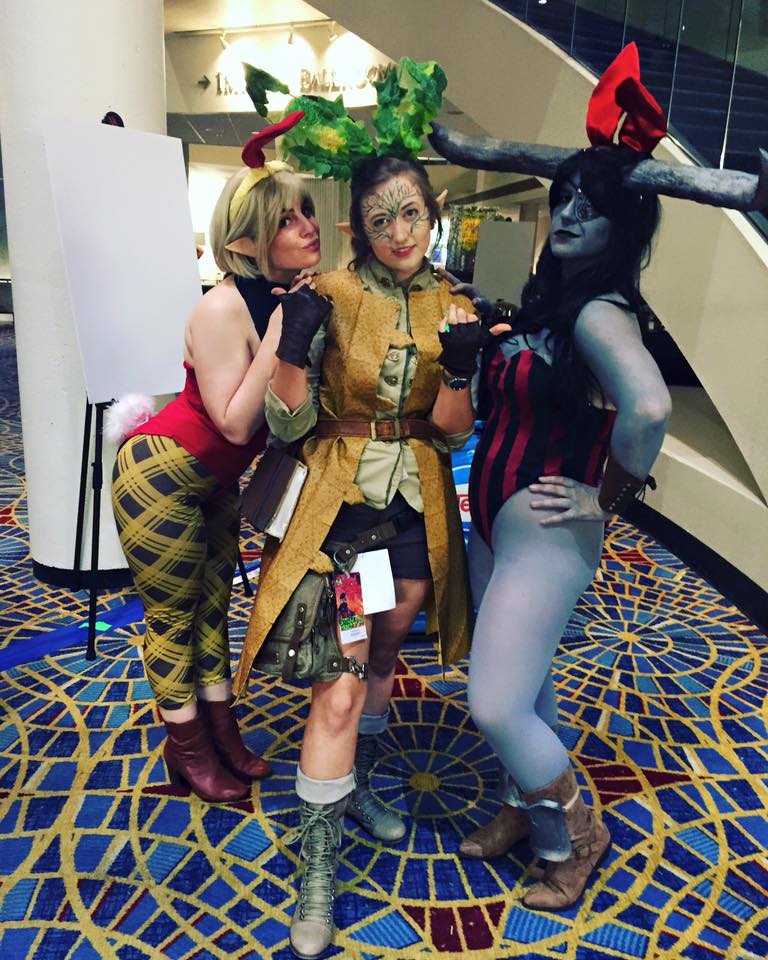 Another big accessory was the staff. I actually have written a tutorial on how to make the staff for the site, including how to make a glowing orb!

Yes! This year was the year of new friendships for sure. I learned a new lesson this recent Dragon*con, and it is to join a fandom group and go to meetups.

I joined up with the Dragon Age group on Facebook over the summer, and I loved seeing people post cosplay progress pictures, meet up ideas, advice, and general love for the series. 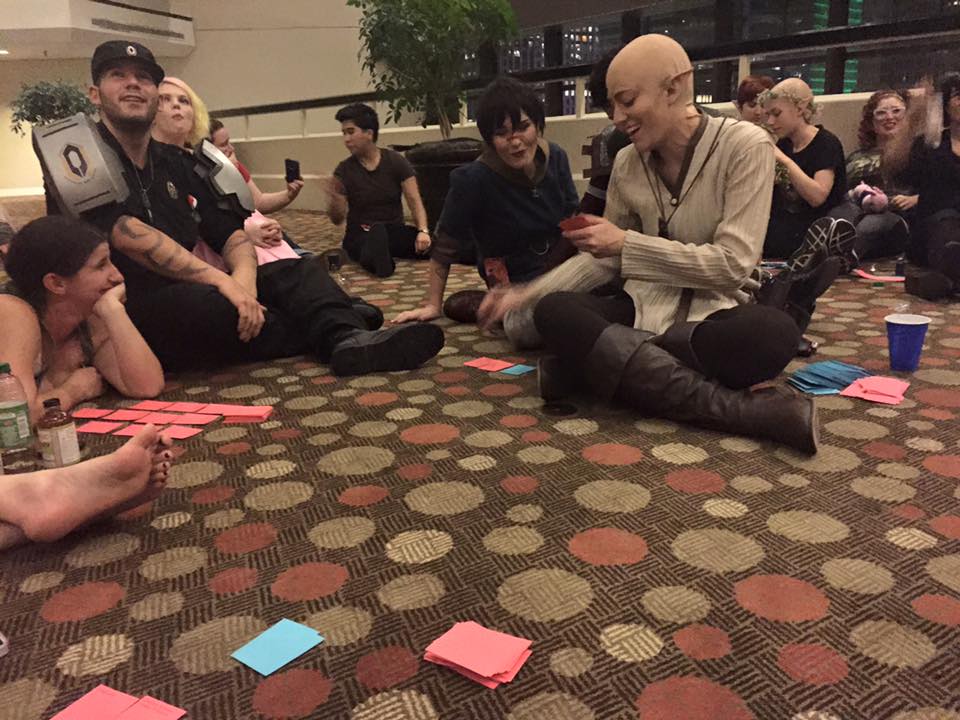 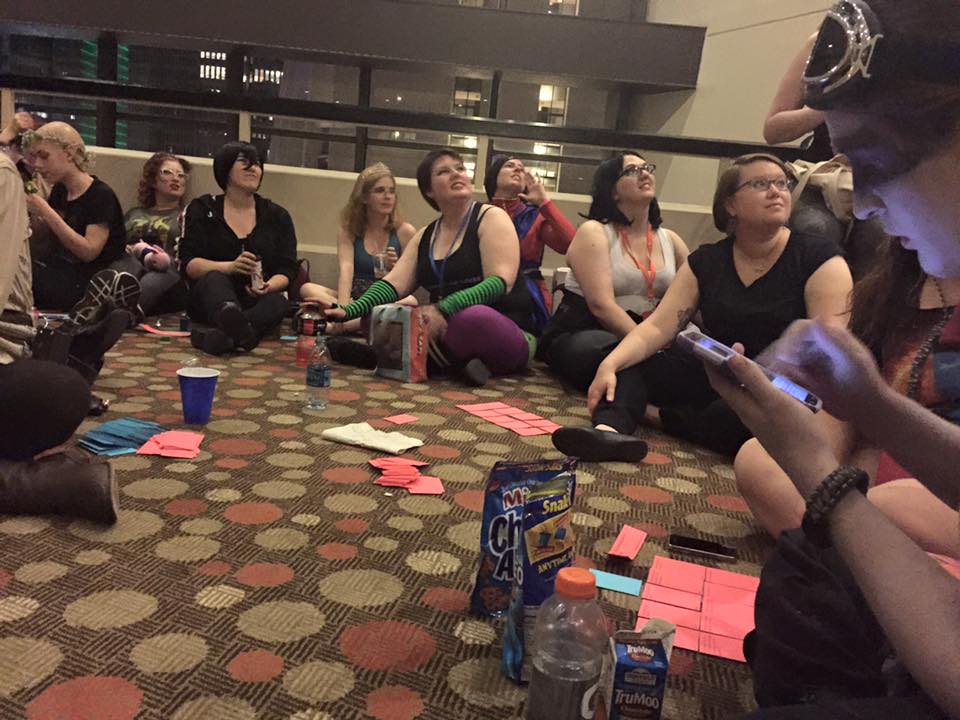 Never have I ever been around more supportive and fun people that were a part of a “fandom.”

I usually dislike the association of fandoms because they have negative sides like hating on people for liking certain characters, judgmental views, criticizing accuracy in cosplays, etc.

With this group, I would much rather call them a “fanmily,” because complete strangers got together, had so much fun, and left with more Facebook friends.

I got to play Cards Against Dragon Age with a group  of 30 or so and it was the highlight of my con. Dragon Age is such a well developed game series, with amazingly considerate and creative creators. It translates well within the fans and I loved being around such amazing people.

This year was probably my favorite because I truly did feel like such a celebrity when walking through the halls someone would yell out “Lady Lavellan” or “Inquisitor” as if I was walking through my very own Skyhold fortress.

I loved meeting new people who enjoy the same things as me, also gaining more opportunities to be a part of future projects! My final advice to sum up this article:

Why Our (Fictional) Future Is So Bleak