Years ago I was flipping through the channels and a show caught my eye. A woman had won a $5000 shopping spree in a large department store. She was poised at the front of the store with an empty shopping cart and 5 minutes to load up whatever she wanted.

But when the starting gun fired, she froze, frantically looking back and forth between all the aisles. She didn’t know what to choose first. The whole thing was just too good.

Review of Ashes: Rise of the Phoenixborn 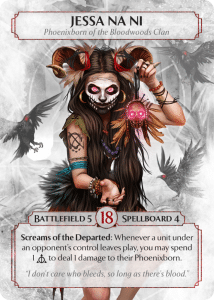 That’s how I felt about Ashes when I first saw the different factions from the Ashes: Rise of the Phoenixborn card and dice game.

The base set for Ashes comes with six Phoenixborn, each with their own deck and special flavor:

Review of Ashes: Decks of Cards + Pools of Dice 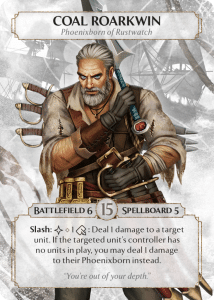 And each Phoenixborn is interesting, well-balanced, loaded with a creative assortment of spells and conjurations to pull from, and offer a unique angle on the gameplay. When I try and think of which Phoenixborn to play, I just freeze up, looking them all over. They all are just too good.

Then there are the dice that are used as “mana” for the Phoenixborn. The dice are great. They are big and chunky, feel great to roll, and have a sharply done runes etched into them. But more important than the aesthetics, the dice add a really interesting gameplay element to the game.

Besides the dice adding an element to the resource management, the unique dice powers add another useful option to the game, even if it seems like I always forget the dice power exists. If it’s not a future rule that all games should include BOTH cards and dice, then it should be a strongly worded recommendation somewhere, because it’s a great part of Ashes.

We’ve already established that the cards are great and the dice are great. It would be boring for me to list out every component of the game, when you could simply go to the Plaid Hat Games website and skim that info from their marketing material. Likewise, it would be dull for me to walk you through each step of gameplay, when Watch it Played made a sweet playthrough video.

So let’s just rush to the Conclusion Machine, shall we?

Review of Ashes: Musings and Opinions

I couldn’t forgive myself if the first thing I mentioned here wasn’t the BEAUTIFUL ARTWORK. Holy smokes, it’s gorgeous. All the art for Ashes was made by Fernanda Suarez, the artist who also did the art for the insanely popular Dead of Winter game.

I don’t know a thing about Fernanda, other than she is incredibly talented. It may require extreme measures such as supergluing Fernanda to her desk or whatever incentive needs to be done in order to have her create ALL THE GAMES, but get it done, Plaid Hat. She’s that good, and the art is absolutely an asset to the overall game. 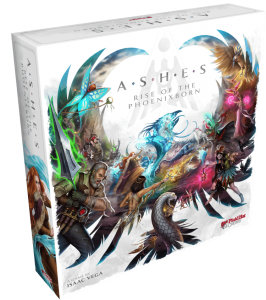 Likewise, the graphic design is excellent. Graphic design is an aspect of gaming that is oft over-looked, but when you compare a game like Ashes to a game where the graphic design was phoned in (like Legendary), you can appreciate how the font text, symbol design, and clean, sparse layout of the cards lends itself to Ashes being an extremely playable game. You are neither squinting to find information, nor confused in how it is presented.

The theme is a lot of fun as well. If you are a fan of relaxing trading in the Mediterranean, then the theme of Ashes might not be for you. My wife, for example, didn’t like the voodoo witch Jessa Na Ni, to which I said, “Great! Then hand that witch over, I’ll play her!”

But I think the Highlander meets Magic meets Mage Wars theme will be a huge hit among most gamers, and the balance between the Phoenixborn is superb. You’ll have difficulty determining which deck is your favorite, as all of them will be your favorite.

Should Ashes prove to be a hit (and it already is in my heart), there will certainly be future decks. I know I’ll be first in line to drop $15 if it would get me a new Phoenixborn deck. But adding more cards to the core set brings of the only real head-scratcher in my review.

There is no helpful way to sort of store the 250 cards the game comes with. All Plaid Hat gives you is a stack of ziplock bags. Uh….thanks for the bags? [Quietly returns the silly little bags for in-store credit which he never bothers to use.]

Sure, storage is nit-picky, and perhaps it’s only glaring because the production elements of all other aspects of the game were TOP NOTCH, but games like the Pathfinder Adventure Card Game (or even the low production Marvel Legendary) offer some sort of in-box method for both organizing cards and also allowing space for future expansion. It felt overlooked. 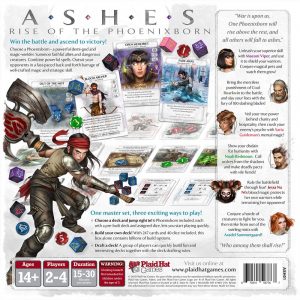 I didn’t meet Ashes: Rise of the Phoenixborn with high expectations. The customizable card game feels like a genre that is pretty saturated, you know? Did the market even need Ashes?

Well, once you play it a few times, you realize that Ashes is heads and shoulders above most of the cards games out there! It’s not perfect. It took a several plays before the game play truly sped up, as the first few takes were met with remembering the dice powers, and the Phoenixborn powers, and the blah blah blah. It felt fiddly at first, so it’s a game that takes a few plays.

I can’t prove this, of course, but Ashes feels like a passion project for designer Issac Vega. It feels like an homage to Magic, a fresh take on the card and dice games he’s loved. Because a passion for the game comes through. It’s as well done as it is fun. And it’s also highly recommended.

The Asymptote’s Tail: The Beginning of a Promising Sci-fi Epic