After last week’s set-up episode, what is in store for the team this week in Agents of SHIELD episode 304: Devils You Know? 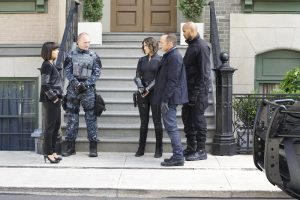 Devils You Know opens with Alicia, an Inhuman who seems to have the ability to duplicate herself in some capacity, and one of her is meeting with some Inhumans who seem to quietly be in mainstream society, while another one is on a plane with Coulson.

Lash appears, killing the two we later come to know as the Hansons. In the midst of that, Daisy and Mack show up, but they lose Lash as they try to track him. Instead, their new partners the ACTU show up. It is clear that neither side’s foot soldiers like the arrangement, while Coulson and Rosalind verbally spare back and forth.

Meanwhile, Hunter is moving ever closer to infiltrating the higher ranks of Ward’s Hydra. May is worried though as he has become almost reckless in his obsession of killing Ward. He agrees to let her know when he finds out where and when the mission will be.

Back at Shield HQ, May’s ex-husband, Dr. Andrew Garner, is watching Alicia in her Inhuman room, as she recovers from experiencing one of her die at Lash’s hand. He later spends some time with Simmons, debriefing with her, wanting to know how she survived.

Dr. Garner shares how other people in harsh conditions did it, mentioning that they never lost hope. Simmons quietly admits that she did but then doesn’t want to talk any more about it. Dr. Garner assures her that she is safe and has the support. He and Coulson have a bit of spat on the way out, with Garner wanting Coulson to share everything and saying that Alicia wasn’t ready for a mission.  In the midst of their discussion May shows back up.

We learn that Garner left May for some reason and she is attempting to move on, while Coulson is enthusiastic about her return, saying if the issues between her and her ex-husband have been why she has stayed away, he will jettison Garner, no questions asked. She explains that Hunter is out of control, she will need back up at this next mission and leaves, having a brief conversation with Garner on the way out. 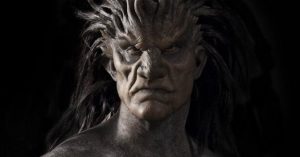 Meanwhile, Team Science (Morse, Fitz and Simmons) has been at work, discovering an email that is being sent to known Inhumans that is actually a virus, which determines their location and works issues on their computers. After Coulson makes Daisy share that information with ATCU, they discover a pattern and trace it back to a government computer guy.

It turns out that the hacker is an Inhuman, whose power seems to be severe allergic reactions to other Inhumans. Eventually, it is decided he will be in ATCU custody and Coulson convinces Rosalind to let Daisy and Mack ride along to see their facility.

But on the way, Lash attacks. (Who is Lash?) Mac is hurt, the truck is flipped, and Lash kills the hacker, who had been working with Lash, convinced that what Lash was doing was merciful. Lash corrects him, saying it is not merciful, only “necessary” then walks off. As he goes, Daisy sees him in the shadows and it appears he is morphing into a normal looking person.

Team Science has conversations, with Fitz being shocked when he sees Jemma’s notes on the Monolith and Simmons assumes that Morse shared last week’s revelation that Jemma has to go back. Morse hadn’t and when Simmons later apologizes they have a good conversation before Morse says she has a gut feeling Hunter is in trouble.

And he is. After driving around in the trunk of a car, Hunter is finally in the room with Ward, though unarmed and with many Hydra folks in the room. He manages to get a gun, let Ward see his face and a shoot out happens, with May coming in and saving Hunter. The odds are still stacked against them but Coulson’s back up tactical team is still too far away. 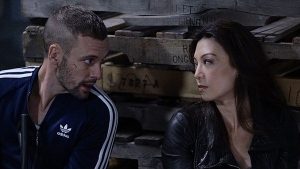 Ward does some major super villain monologuing that culminates with him slide a cell phone to May that shows Alexander von Strucker, the new Hydra recruit cornering May’s ex. Ward says he will kill Garner if they don’t stop now.

May and Hunter have a back and forth debate when Hunter unilaterally decides he is still going after Ward. And as Ward and a few men make a break for it, Hunter gets a shot on Ward, but it is clearly just going to be an injury, not a death blow.

The episode closes with Fitz and Simmons talking about what happened, with him revealing he understands that she wants to re-open the portal and her asking for his help to do so, with Simmons saying “I need your help. It is time to tell the truth.”