Who is Lash? You have to be a modern nerd, well-versed in current events, if you are familiar with the Marvel Character Lash. Marvel is trying to prove that they can still lay down some fresh beats, and not just keep spinning the oldies.

But although Lash has only appeared in a few comics and only within the last couple of years, he made a brief appearance in the season 3 premiere of Agents of SHIELD. And how is Agents of SHIELD lately, you might ask.

Oh, my friends. It is glorious.

In fact, if you aren’t watching Agents of SHIELD then your life score is -873, you’ve committed two line faults, been red carded for high sticking, and the manager of Olive Garden is asking you to leave, which is particularly bad because the Olive Garden is not much more than a novelty breadstick cannon.

In summary, watch Agents of SHIELD, in no small part because the recent appearance of Lash opens up some potentially thrilling storylines.

Now, go lock yourself in a HYDRA bunker if you distain spoilers of any type. Even though TV writers do a great job of taking the basics of comic stories, only to give them a fresh spin for the small screen (see the Walking Dead), knowing Lash’s basic backstory has serious implications for how Agents of SHIELD season 3 plays out.

Those of you who throw caution to the wind, stay with me as we discuss Lash.

[divider]Marvel’s Inhumans: Who is Lash? [/divider]

He was born in the secret Inhuman city of Orollan. Although he received the gift of Terrigenesis (the process that turns humans into Inhumans), Lash believes Terrigenesis is an honor that not everyone of his race is worthy of.

So Lash is on a mission to find all the changed individuals in order judge for himself whether they were worthy to live with their new abilities.

In short, Lash is an Inhuman who thinks he’s judge, jury, and executioner.

“Tell me where to find the Inhuman,” was the telling line uttered by Lash, who went on to zap a hole in a security guard’s chest.

In terms of appearance, he looks like a porcupine ate a professional wrestler and his powers are energy manipulation. Specifically: 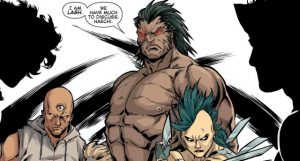 Given what we saw in his brief appearance on the television show where Lash both wielded a blue-tinted energy and absorbed blasts from two other Inhumans, it appears his powers will be fairly similar to the comics.

The comics depict Lash as ruthless and merciless. He is a zealot, emblematic that not every Inhuman gets along with every other Inhuman, read as an allegory for the violence humans inflict on one another. Lash illustrates that the Inhumans are not a united front, which is good news for future Agents of SHIELD storylines and for the upcoming Inhumans movie.

On a practical level, he represents a whole new world to explore and can serve as the proxy introduction to dozens of new characters. If the character introductions track along with the comics, then Agents of SHIELD may be soon introduced to The Tribe, a group assembled by Lash to continue his mission on behalf of Inhuman supremacy. 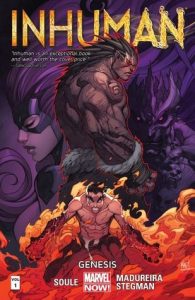 Lash’s first appearance in Marvel’s comic books was in Inhuman #1, written by Charles Soule with art by Joe Madureira.

Inhuman is actually a pretty entertaining series if you are curious not just about Lash, but about the Inhumans in general and what Marvel’s plans might be for them. You have to start somewhere, and Inhumans #1 is a pretty good place. It’s available from Amazon.

Thanks for reading. If you’ve enjoyed Nerds on Earth, please help us spread the nerd word by using the social media buttons located all around the site.