By Jennifer Ruffin On Oct 10, 2015 Last updated Jan 15, 2019
For the first time in almost 10 years, Sailor Moon will be coming back to North American audiences, through their deal with Viz Media (the company that has acquired exclusive North American rights from Toei Animation) will stream the first four episodes of Sailor Moon.
Share TwitterReddItPinterestFacebookEmailPrint

Sailor Moon fights evil by moonlight and finds love by daylight. She’s young, beautiful, and a superhero in every sense of the word. And since I have watched every episode of every season of the original series, I wanted to tell you guys my 7 top moments from Sailor Moon.

It was hard to narrow it down, of course. But I did limit it to the original series. I have not included moments from Sailor Moon Crystal, the movies, or the manga. I may do that later.

Also, these are in order of episodes not best to worst. I will also be using the Japanese names. 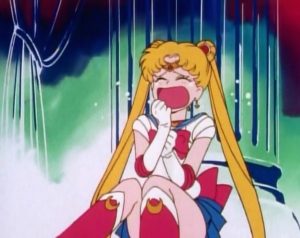 Tsukino Usagi was an avenge person until she discovered her magic super powers. A talking cat named Luna gave her a locket and told her to use the words “Moon Prism Power Make-up” and vóila, she was Sailor Moon. And let me tell you, that first transformation is magical. The music, the ribbons, the music. I still get chills and grin foolishly when I think of my first time seeing that.

And Sailor Moon’s friends all have different transformations. Each time they first become their Sailor Senshi selves, it is beyond amazing. Mars has flames engulf her, Jupiter is surrounded by lighting, Mercury has ribbons of water cascade over her, and Venus has a curtain of stars appear around her. In my mind that is much cooler than Superman just ripping off his dress shirt.

2. Episode 44: The Destruction of the Moon Kingdom 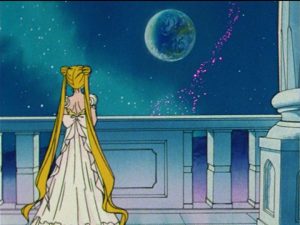 Sailor Moon has a very interesting backstory. It is full of tragedy, love, and adventure. She is actually Princess Serenity of the Moon Kingdom. When you find this out you also find out that she and her love, Prince Endymion, were killed by an evil, jealous woman name Beryl.

With her very last breath, Serenity’s mother and queen sent Serenity’s soul, along with her friends and love, to the future. And that scene always breaks my heart. Queen Serenity is on the ground, dying. The ruins of her kingdom around her. Her daughter and her daughter’s closest friends bodies are on the ground. And she knows, Beryl isn’t done. So, with the last of her strength, she uses her powers to save the future. 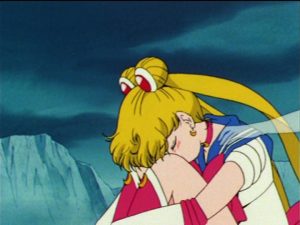 After it is revealed that Usagi is actually the princess they have been searching for, there is no time to celebrate. Beryl is back and just as mean and evil as ever. So, the senshi, Princess Serenity’s guardians and Usagi’s best friends do something that most fourteen-year-olds would never do: they jump out in front of Usagi to save her so she can fight the final battle.

Each girl tells Usagi to be strong. To keep fighting. To hold on.

I won’t lie, the first time I saw this episode, I cried. You spent the entire season getting to know these girls. You see them interact with each other, fight baddies together, tease each other, and grow to love each other. And then, they die. Usagi is in tears at the end of the episode. And so is most of the audience. 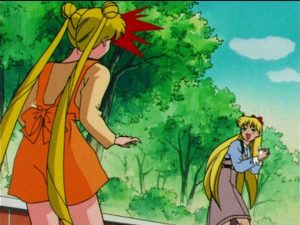 Let’s jump ahead a couple of seasons. The senshi are back and stronger than ever. And a new bad guy is in town. The Witches 5 are stealing people’s heart crystals, something that makes up a person’s soul.

The Witches 5 have targeted all the senshi at one point. Except for Minako or Sailor Venus, and she is not happy. So, she decides she needs to show how pure her soul is by giving blood. So much blood that she acts a little loopier than usual.

The best part of this episode is when her heart crystal is outside her body and Minako is so excited, she runs off with it. Let’s just say that the villain is very surprised and a chase begins. 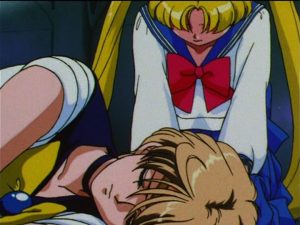 This season introduces three (and later four) new senshi. The Outer Senshi show up and surprise the original (or Inner) Senshi. Who are these new fighters? Are they with us or against us?

Sailors Neptune, Uranus, and Pluto seem to have their own agenda. But you later find out that they are after the same thing the Witches 5 are after: The Three Talismans. It is said that those three objects can form a very powerful weapon, so the Inner Senshi are racing not only the Witches 5 but also these mysterious senshi to figure out where these talismans are.

Sailor Uranus and Neptune can be very cold and cruel while Pluto is very standoffish. But you grow to love them. So, it makes it even sadder when you find out that they have the talismans in their heart crystals. Because they seem to die when it is revealed. It’s a very touching scene when Neptune’s crystal is taken and she falls over, making Uranus almost give up. Let’s just say, Usagi ends up saving the world and her new friends yet again. 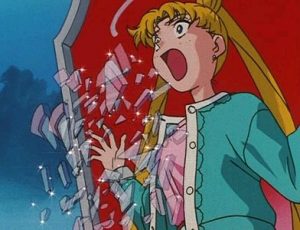 Again, skipping ahead a season. New baddies, new agenda. This time, the Dead Moon Circus is after Dream Mirrors to find Pegasus, who hides in people’s dreams. Eventually, Usagi is selected as a target.

Usagi accidently brings attention to herself by being extra nice to one of the Amazon Trio in disguise. This bad guy, of course, thinks that she is the one and pulls out her mirror, which shatters. Usagi falls to the ground, seemingly dead.

The Amazon Trio, having figured out that she is Sailor Moon and the only one that can actually release them from their horrible existence, pull together and sacrifice themselves to repair her mirror. 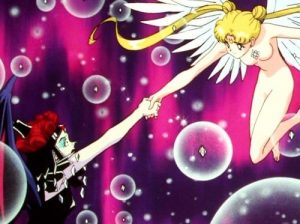 Now we reach the last episode of the series.

Let me lay this out for you: every senshi is dead but Sailor Moon. Sailor Moon’s soulmate has disappeared and she is now facing off against one of her strongest enemies, Galaxia.

But Galaxia is actually under Chaos’ control, a dark enemy who turns out to have been behind all of the senshi’s enemies. Usagi transforms into Princess Serenity, her white dress and white wings making her look more like an angel than anything else. And she refuses to fight. She only uses her sword to defend herself.

Serenity states that her love and light will save the world and Galaxia. And she’s right. She wins. She frees Galaxia, defeats Chaos and is reunited with her friends and soulmate. It makes for a very emotional and amazing episode.