I’m not the same person I was when I was 18. That’s a given. My hair is shorter, I’ve discovered things about myself, and I have tattoos. Many tattoos. 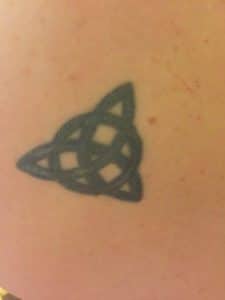 I know what you are thinking. “So? Tattoos are in!”

Yes, they are. Which is one of the reasons why I have so many. However, they are also addicting. And awesome. And cool. And make me feel confident in myself and my interests.

Which is weird, I guess. Why does it take a tattoo to make me confident in what I love?

I didn’t grow up a nerd. I was a quiet, shy, blonde girl that loved to act but just kind of stood on the outskirts of a group and looked inside with envy. I never quite fit in.

Until I embraced my nerdiness. 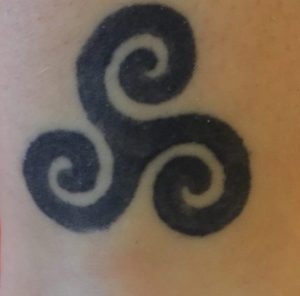 #1 I got my first tattoo when I was 21. And it can be considered nerdy. It’s a Celtic knot and is featured in the show Charmed. And don’t scoff. That show was one of my favorites in high school and early college. A group of woman, who just happen to be sisters and witches? Yes, please!!

I’m also of Irish descent so there’s that as well.

#2 My second tattoo isn’t a nerdy one but it is another Celtic knot. So, we will just breeze past that one.

#3 Now, my third tattoo…this is where it gets really nerdy. 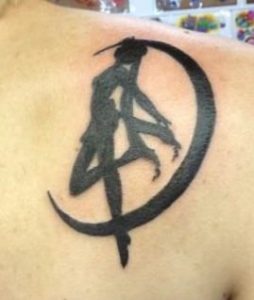 I thought long and hard about it. But decided that I needed this in my life and on my body. Sailor Moon played a huge part in my acceptance of my nerdy side. I realized that I could be a nerd and still be a girl. And honestly, I have gotten so many compliments on this tattoo. I wanted something simple but obviously Sailor Moon. And fellow Earth Nerd, Morgan, went with me to get it.

#4 Now, let’s move on to my next tattoo. A chakram. From Xena: Warrior Princess. Are you surprised? Well, you shouldn’t be. I mean, come on…what else could I get to show just how nerdy I am? Let me permanently put a symbol of one of my favorite shows on my body. 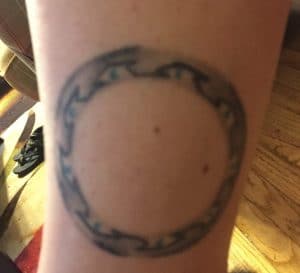 I was once asked, “What’s that round thing on your leg?” And that got me started. I think the person regretted asking me after the first five minutes of me gushing about Xena. But I have no shame. They asked!

#5 I’m a writer. I have been writing since high school. So, I wanted a quill on my arm to show that. But then I thought, “Why stop at a quill? Why not go full nerd?” So, I added the Deathly Hallow symbol and the line “Mischief Managed”. And the quill is gorgeous. 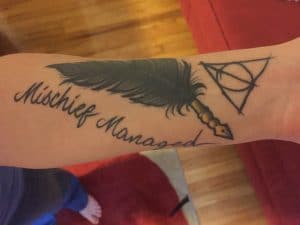 The artist freehanded it on my arm. I have gotten so many compliments on that.

#6 I then decided to move on to video games. The company Bioware has opened so many doors for me in regards to friends and fellow nerds. I have had the best year since I joined a Bioware group online. I’ve met so many people that I know will be with me for the rest of my life. I have a huge extended family now. In fact, I think most of them will be invited to my wedding. (Be ready for those invites, guys. I may give out nugs at the reception!) 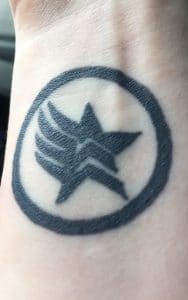 So, my next tattoo was the Paragade symbol from Mass Effect. I didn’t want to go with just Paragon or Renegade because my Commander Shepard is never just very good or very…Slytherin. She’s always a little of both. And I just love holding up my wrist when someone says something about Mass Effect.

I just love to see who the biggest nerds are. The people who recognize it can be my friends. 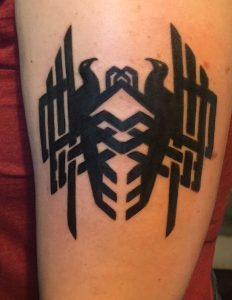 #7 My most recent tattoo is also from a Bioware game. I got the Hawke family crest from Dragon Age 2. It is also known as the Amell family crest but since I cosplay as Hawke (sarcastic Hawke of course) and she steals it back I see it as the Hawke crest. Why Hawke? Not only because of cosplay reasons but because Hawke went through so much in ten years but still kept a great attitude. And just happened to save her city, no matter what anyone else says. She’s strong (or he, depending on which gender you play as), loves her family and friends, and will get stuff done, no matter what.

That’s all the tattoos I have at this moment in time. Will I get more? Yes. Will they be nerdy. Yes. In fact, I already have about two more I’m planning on.

I’ve gotten most of my tattoos at Cherry Street Ink in downtown Macon, GA by Kevin, the biggest nerd in the tattoo parlor. I specifically asked for him because I want someone just as nerdy as I am to do my tattoos. In fact, he put on Doctor Who while he did my most recent one. That was amazing.

Comment below with what nerdy tattoos you have! Maybe I can glean some ideas on my future ones!!