Each Friday we’ll relay the latest trailers, biggest casting news, and nerd culture’s most important stories of the week.  Let’s get to it, shall we?

Nerd Culture Highlights for the Week of April 10, 2016

We’d be negligent not to lead with the trailer for Marvel’s Doctor Strange.  It simply bleeds the Whole New World trope, and we couldn’t be happier!  Strange will bring a power set to the Marvel Cinematic Universe that we’ve yet to see, so discovering its possibilities as an audience along with him will be pretty cool.  I’m also personally stoked to watch Chiwetel Ejiofor as Baron Mordo.

2. Cloak and Dagger are coming to cable TV!

While Agents of S.H.I.E.L.D. goes after Marvel movie fans and Daredevil and Jessica Jones cater to an older audience craving darker fare, Cloak and Dagger will be aimed at what Freeform calls the “Becomers” demo — young adults aged 14-34. The younger characters and romantic emphasis should go a long way distinguishing Cloak and Dagger from the Marvel shows that already exist, opening up different kinds of stories.

Marvel YA?  We’re in.  Click here for a little background on these two characters from our own Jason Sansbury, who also has a post scheduled for April 18th outlining his hopes and fears surrounding the show – so stay tuned!

3. Destiny’s The Taken King got a few more bells and whistles on Tuesday.

I have a love/hate relationship with Destiny right now.  The first DLC was lackluster, but the second totally made up for it…only for the third – The Taken King – to all but break the game if you didn’t fork out the additional $40 (that is…additional to the $40 you already spent on the first two expansions).  That means this game’s ticket price is currently at $140 if you bought it at launch and want everything, which I think is a) nuts and b) not very nice to the folks who got in on the ground floor.  (One of the commenters on the video below calls it “Destiny: The Taken Wallet.”)

However, while I don’t own The Taken King expansion, you might!  And if so, you got a load of new stuff for frizzle this week.  Catch the video below for the full details.

4.  Simon Kinberg confirmed with Cinema Blend that Wolverine 3 will take place in the future.

Jason recently highlighted the Old Man Logan run (Wolverine 2003’s #s 66-72; available on the Marvel Unlimited app) as an installment in our Comics You Should Know series.  The internet has long 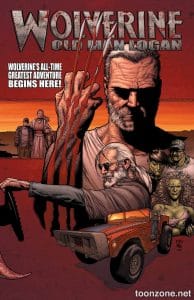 suspected and hoped that Jackman’s last outing as Wolverine would take place within this arc, and this certainly fans the flame a bit.

Lot’s of cool potential for that movie…Flashbacks showing Wolverine killing all the other X-Men by way of a trick by Mysterio, the resolution to never use his claws again, and then an inciting incident that leads once more to everyone’s favorite onomatopoeia – SNIKT.  Could see such things as Wolverine in Iron Man’s armor (briefly and not for any combat purposes, but still cool!) and the rage-fuelled slaughter of a bunch of hulks.  Plus a road trip with a blind Hawkeye!  Much to love and anticipate.

Dorkly has a pretty great video series entitled Today in Nerd History and this week they released one that highlights five women who made major waves in our favorite genre.  I’d only ever even heard of one of the women (Mary Shelley) and I had absolutely no clue that she is widely credited with the creation of the science fiction genre with her work Frankenstein.  Follow the link, give the video a peep, and thank these pioneering women for much of what we celebrate here at Nerds on Earth.

7 Reasons Why You Should Be Playing Board Games