Tropes are the frames by which our favorite medias take shape. Love them or hate them, they’re there.  In some instances tropes frame an entire movie. In others they might define a character or characters (like The Jock or The Fool), shape a scene (Damsel in Distress), or even just dictate a line or two of dialogue (“We’re not in Kansas anymore.”).

As Clave pointed out: Tropes can be a very good thing – breeding familiarity or flipping them on their heads to surprise the audience.  Here is a list of my Top 7 Favorite Movie Tropes. 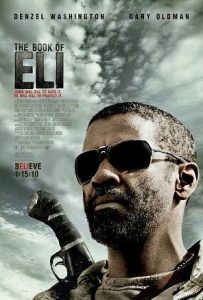 We’ll start with one lifted straight from Clave’s post that is very near and dear to my heart. The world is ruined for one reason or another and survival becomes the name of the game.

Examples abound, but one of my standout favorites is The Book of Eli. In it, the lone survivor (not to be confused with the only survivor), Denzel Washington’s Eli, isn’t just surviving, he’s surviving for a purpose.

In fact, his purpose is a trope in and of itself: He’s got a calling from God; namely to a deliver the last remaining copy of the Bible out west where it would be “safe.”

This trope comes loaded with a ton of cool features: some catastrophic event, its fallout, people learning neat new tricks in order to survive without amenities (like using cooked kitty cat grease as lip balm), power plays (as pockets of survivors attempt to take advantage of one another), and even cannibalism.

This one might actually be my favorite because it opens the door to some outrageous comedy.  With this trope, our heroes are heroes almost by accident. They might even be completely unaware that they’re championing or saving anything at all.

Take Dumb and Dumber as an example. Harry and Lloyd were just trying to return what they thought was a forgotten briefcase but end up helping the FBI arrest a kidnapper and extortionist. Most of the inane stunts they pull end up helping save the day – like accidentally giving Mental rat poison intended for them instead of his medication. From the perspective of Mental’s boss, the bumbling duo seem like professionals…but we know better. Dramatic irony is king when this trope is in play.

This is the red pill/blue pill dichotomy. Characters are invited to and made aware of wholly new layers, if you will, to the world in which they live – stuff that’s always been there, but has gone previously unnoticed or unreachable.

The Matrix, aliens among us, and wizarding schools to name just a few.

Bonus points are awarded when the new layer explains curious elements of our world. In The Matrix, deja vu is explained as a phenomenon that occurs when code has been rewritten. Tabloids are touted as extremely reliable and valuable sources of accurate extraterrestrial information in Men in Black. Harry comes to discover that his connection with magic explains the glass disappearing from the snake tank at the zoo during Dudley’s birthday.

When the new world breaks in upon our own, it gives us a fun explanation for things in real life!  How cool is that?!

There is some very well trodden ground here, and I have a sneaking, dark suspicion as to why. When 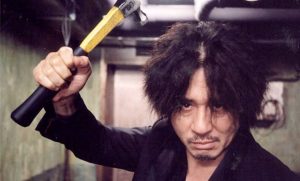 we indulge in a movie motivated by violent revenge, we scratch an itch with fantasy that we can’t in reality – at least not without consequence!

We’ve all been wronged. We’ve all fantasized scenarios in which we exact our revenge. And while most of us don’t carry those fantasies out, we sure as heck get more than a little satisfaction watching The Bride slaughter her enemies in Kill Bill.

One of my favorites from this trope: Old Boy. But not the Josh Brolin version. I’m talking about the 2003 Chan-wook Park film. Dae-su is kidnapped and framed for his wife’s murder. After 15 years in isolated captivity, he tracks down the man who paid for his kidnap and internment and discovers his captor’s motivations. Its super dark and the twist at the end is absolutely nuts.  Its revenge-ception – a revenge story within a revenge story!

That quote from Liam Neeson’s character in Taken is the very definition of the Papa Wolf trope.  More often than not, it is defined by a literal father/child relationship (a la Taken or even the mommy/daddy T-Rex duo in Jurassic Park 2: The Lost World), but not necessarily so.

My favorite example comes from a surrogate relationship:  That which exists between John Creasy and Lupita Ramos in Man on Fire.

Pita is kidnapped and Denzel’s Creasy goes ballistic on her captors, slowly killing his way up the ladder and exposing a lot of misdeeds along the way. And his military background makes him downright good at it. Thankfully this movie is about more than the violence though, which makes it an absolute standout in my book. It is dramatic, emotional, and ultimately a story of love and redemption. Best Papa Wolf movie out there IMO.

Its always fun to cheer for the underdogs, and this trope lets you do just that. Some relatively small (that is relative to the group they are resisting) group is up against a superior force but just won’t quit.  Heart and ideals reign supreme in these pockets of plucky protagonists, and the best ones make the resistance about the preservation of some element of our humanity (or even humankind as a whole). 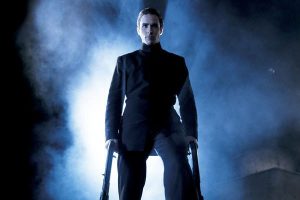 Skynet),The Matrix (humans versus machines), and my favorite of the lot: Equilibrium.

Equilibrium is like Fahrenheit 451 but with guns, and it is exactly as awesome as that makes it sound. To this day, it is the one Rotten Tomatoes score that just baffles me on a personal level. It’s about a Cleric (Christian Bale) who transitions from killing what are called “sense offenders” (people who experience emotions because they’ve stopped taking the mandated drug that suppresses them – they’re the resistance) to championing their cause after coming to appreciate the very things he’s spent his life destroying.

Last but not least, this trope basically pokes fun of tropes. Defining such gems as Tucker and Dale Vs Evil, Cabin in the Woods, Mystery Men, and the entirety of The Cornetto Trilogy (Shawn of the Dead, Hot Fuzz, The World’s End), it basically parades a bunch of tropes about and makes you laugh at the absurdity of them.

Of course, each of these tropes has ten “dud” examples for every “stud” example, but I’ve highlighted my favorites- trying to point you towards an exemplar of each so you can give them a watch yourself!

Which tropes that you love didn’t make my list?  Let us know in the comments!