Adkins (Co-Founder of Nerds on Earth, Joseph’s hope in the event of a zombie apocalypse) The Walking Dead’s finale has us thinking about iconic weapons as Lucille made her television debut. So for this week’s chat, Nash, Joseph, and I are each going to share our own personal favorite from the long list of iconic weapons from video games, television, movies, or comics. These are the weapons we’d hope to find behind that thin pane of glass to be shattered only in the case of an emergency.

Nash, why don’t you start us off.

Nash (A fellow ‘chucker) Man where do I even begin?!?! I feel like the weapon makes the character in so many situations. For me it all started when I first turned on the TV to Saturday morning cartoons and was introduced to TMNT. I always really appreciated they had unique weapons, of those first four iconic and character defining weapons, my favorite would be nunchucks.

However, that only scratches the surface of this discussion for me and I guess it depends on what the scenario is, of course. Now that I am on Ninja weapons because of TMNT and coming off of watching the finale of Daredevil last night, it would be close between traditional nunchucks or DD’s billy club.

However in my preparation for this I was stuck on Zombie Apocalypse and I was debating between some of the characters’ claimed weapons or coming up with my own.

Adkins So of all the weapons spanning video games, movies, and TV…you’d go with a couple of sticks?

Joseph (This is his first chat, so go easy on him) Hey, don’t let Adkins steal your thunder, man. DD’s billy club is a fine weapon, particularly when used effectively.

Adkins I’m just seeking clarification. I don’t want Nash to feel limited in his choices is all.

I pegged him as a lightsaber man, myself.

Nash Ok, so then I did reread my Sci-fi weapons list which is all guns and laser weapons and thought, man…lightsaber…

Could I have Light Nunchucks????

Joseph Kylo Ren could build you some.

Adkins When he’s not being all angsty.

Nash Then it hit me. 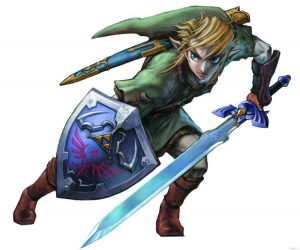 The most iconic weapon of all time…Link’s sword from The Legend of Zelda.

Adkins Remind me: Did it have any particular powers, or was it just a super sexy sword?

Nash When you have full health it shoots laser blasts!

Joseph In later games, I seem to remember them giving it various properties based on completing temples, dungeons, etc. Like in Wind Waker, your normal sword couldn’t harm certain enemies until you had completed the Light Temple, I think.

Nash Yeah, it has seen some transformation over time

Adkins The laser bit is pretty cool! I seem to recall that particular trick when wearing the Fierce Deity mask in Majora’s Mask!

What about you, Joseph? What weapon would you wield in the darkest of times in defense of all that is good?

Joseph Yeah… I think I went a little different route than Nash. I started thinking of all the iconic weapons in nerd lore, but about what it would be like if I wielded it. I couldn’t lift Mjolnir, so it’s useless to me. I couldn’t wield a lightsaber or the Blades of Chaos without severing a limb. I’m probably not even a good enough shot to use the BFG from Doom effectively…

So in the end, I tried to think of the greatest, most iconic, weapon that I could use myself. I landed on the Ark of the Covenant from Raiders of the Lost Ark.

I figured – ultimate cosmic power of God in a box, and all I have to do is not be a Nazi.

Adkins That is hilarious! Totally unexpected answer. I can’t say that the Ark even crossed my mind during my contemplating.

And I really dig your practical approach. You’ve got smarts, sir.

Adkins Although I’m a teensy bit bummed you think yourself unworthy of Mjolnir.

Part of me wants to argue that thinking as much qualifies you all the more!

Nash ^ What he said lol

Adkins So I’ve thought a lot on this. Nerdom is overflowing with iconic weapons, so the choice was a difficult one to make, but my decision is final. I would 100% want a Lancer Mark 2 of Gears of War fame. Its the standard issue Cog weapon that has a rate of fire on par with today’s M16, holds 50-60 rounds (depends on the game) per clip, a high accuracy, a low recoil…and the best part…it has a freakin’ chainsaw built into it

Listen, I’ve killed many things with many weapons during my video game career, but the fact of the matter is that nothing – NOTHING – has brought me as much satisfaction as cutting a Locust in half with that chainsaw.

Joseph Was the chainsaw built in, or was it after-market? It’s been a long time since I’ve played a GoW game…

Adkins So the Mark 1 was chainsaw-less, but as in-game history goes, the upgrade was inspired shortly after Emergence Day. The Cogs complained that the Mark 1 bayonet was next to useless against the Locusts and their armor, so Adam Fenix (Marcus’ dad) whipped up the Mark 2.

Joseph I dig it.

Adkins And let’s be honest, guys: The sound of a chainsaw revving is one of the most fear-inducing sounds known to man. Second…maybe…only to the chambering of a cartridge in a shotgun.

Joseph Definitely. And I’m sure you would wield the Lancer Mark 2 with aplomb, too. I’ve said for years that if a zombie apocalypse ever actually happens, me and my family are driving to where you are.

Adkins With the Mark 2, I’ll have you covered from a distance and up close!

So to close: I grew up watching The Power Rangers, and occasionally they would combine their individual weapons into this megaweapon. So what would that be like given our choices?!

Joseph Hmmm… The Ark of the Covenant opens, and angels of wrath pour out of it, firing Lancer Mark 2 rifles and shooting lasers out of flaming Master Swords?

Nash Well guys, if we Nerds on Earth have a civil war, I am picking our side based on our mega weapon!

Adkins Let’s hope it doesn’t come to that!

Here are some badass historical weapons, some ninja weapons, and some science fiction weapons for you. And here is this, just in case you need to know how to use a lightsaber.