By The Bullpen On Dec 7, 2018 Last updated Dec 6, 2018
Share TwitterReddItPinterestFacebookEmailPrint

Jason (Nerds on Earth Co-Founder and Human War Priest Cleric 5) This week, we are gathering to chat about what has become a phenomenon in popular culture. Sure, nerds like me were playing Dungeons and Dragons WAY back in the day but now, Dungeons and Dragons (and 5th edition, which we will lovingly(?) refer to as 5e) is really having a moment! So to start off, let’s get a bit of background from everyone. When was your first Dungeons and Dragons game and what made you start to play?

Adam (Co-founder of The Back Patio Network and Halfling Bard 2) The first time I played 5e was with some of the fellow nerds in this channel actually! I played with Chad Hughes, Davery Bland, and Wes Smith. I remember playing a shape-shifting Druid. If I remember correctly, it was a higher level one-shot too! We ended up fighting some sort of Dwarf God, it’s been a few years so I can’t remember exactly what it was named. However, I’d played other tabletop RPG’s for a few years before that!

Jason And that is an important thing to note: DnD is sort of the best known of the tabletop roleplaying games, but it isn’t the only one.

Whit (Graphic designer for NoE and Wood Elf Ranger 7) My first DnD experience was way back when I was in middle school. I use the term “experience” loosely because mostly my friends who were really into the game would occasionally invite me over for sleepovers and we would spend a ridiculous amount of time generating a character for me to play, and then a few precious minutes of actual game time (usually with me asking to borrow dice or looking up which spells to cast).

Adam Honestly, I’d say that’s one of the biggest things keeping people from getting into the hobby! First time character generation for any system can be daunting!

Whit It’s funny how things like that change. I used to hate that part of it, but now I’ll roll a character up just for funsies.

Adam Oh man, me too! It’s honestly one of my favorite parts.

How about you Jaws? What was your first experience?

Jason Gosh. I think I came into ADnD from one of two points: I had a cool cousin who had some of the books right around the time I was reading Tolkien, so some sessions were begun then and right before my freshman years of high school, I moved to a new town, which is when I fell into my first long term campaign. About all that I can remember about it was my character was multiclassed into everything. 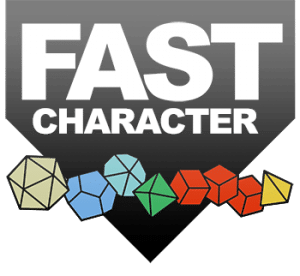 Adam You know, we mentioned first-time character generation being a hard entry point for new people, but I recently found Fast Character! We used it for our most recent 5E campaign for the people that don’t enjoy that portion of tabletop games and it worked out great!

Highly recommended for anyone wanting a pre-gen character in a pinch!

Jason That is a GREAT call out, Adam.  A very useful site for DMs as well when you need to generate some beyond-the-normal NPCs as well!

Whit I’ve enjoyed that about 5e. I got back into the game after many years away because a friend (Earth Nerd Adkins) said “let’s play,” and I had fond memories of hanging with the guys and I found 5e to be a great balance of mechanics & fun. I’ve never felt bogged down, or severely limited in what I can create. It’s been fun to learn the system for real and not just at sleepovers as a middle school kid.

Adam That’s the one thing that I have noticed 5e does really well. If you have a specific build in mind, it’s really easy to accomplish. In other systems, there are typically a metric ton of rules to sift through and a lot of character concepts aren’t always easy to accomplish following said rules.

Jason And let’s face it, 5e is coming along at a time when there is a cultural synergy. Yes, you get the Stranger Things hype but with the prevalence of shows like Critical Role, you are seeing more and more people pick up the polyhedrons for the first time. For instance, if the popularity had hit during 4e, it would be mess. Sessions would be much more about character creation and the lists of feats and less about getting down to playing and roleplaying.

Whit Are there any character concepts that have stood out to you guys as fun to make or play, specifically?

Adam I have to say, my friend Matt got me into Bards a few years back. They have a specific role play heavy bard class called the College of Whispers. It’s so neat! A character completely built around gossip and rumors and using blackmail to get your way. They are even pretty effective in combat. I thought it sounded like a lot of fun, for a more nefarious character.

Jason That is awesome. My current back-up character in my weekly game is a bard and, to be honest, I won’t be super sad if my PC were to die, because the more I watch him as we level, the more excited I get. And I will say that is one of the things that 5e has done well is slow roll out classes, archetypes and races over the new books.

Adam Whit, aren’t you starting a new campaign tonight? Tell us a bit about what you decided to roll up? I got to know!

Whit Yep! We’re starting Storm King’s Thunder soon and I may have rolled 3 characters to pick from. I guess I’ll pick when I get to the table!

Jason Adam, as I recall you are coming to 5e from Pathfinder?  What have been the biggest differences to you?

I would say the biggest difference I’ve really felt so far is how brutal 5e can be at lower levels, also, how the characters feel in general. Let me explain: 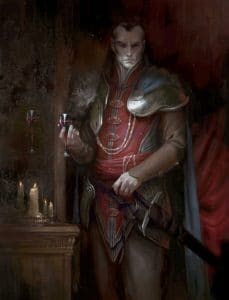 At first level in Pathfinder you are already a hero. Better than average at swinging a sword, or casting a spell. However, in 5e I feel like at first level you are sort of on par with everyone else in the world. You don’t feel like a stand out being a little better than everyone else. I’m only a few session into Curse of Strahd, which has been amazing, but I’ve already had one character die, at first level. It wasn’t a crit or anything, just happened to fail a bad will save.

In Pathfinder, I believe I’ve only died once at first level and it was an incredibly high critical role with boxcar damage from a boss fight.

I think it’s really neat how in 5e you feel like you are building from the base up instead of already being an adventurer. Does that make sense? The only other real big difference I’ve noticed is the freedom the DM has compared to the GM. In Pathfinder there is a rule or feat for anything and everything. In 5e it feels like a lot of things are made up on the fly, which leaves a lot of room for fun story telling!

Whit My first DnD character also died in the Death House of that adventure. It was brutal and i still give me DM crap about it.

I will say, some people have complained and said that Wizards could release material faster but, as someone who has all the stuff, it is a lot of stuff and it has a lot of depth. For instance, Tomb of Annihilation is incredible and we enjoyed it immensely as we were playing through it. And I only used about 25% of the stuff on the book.

Whit Honestly? I’m looking forward to playing a totally new class for me. Learning the in’s and outs, and constantly trying to get better at the RP part of this thing.

Adam I feel ya there! I live for the RP of these types of games. With such a rich environment that Wizards has created in the 5e realm, it’s really easy to get invested in characters and their surroundings. Finally clicking with your character and getting into their headspace is easily my favorite part of slinging dice.

Jason For me, I really enjoy helping new people find DnD and come to enjoy it. Our weekly game started because we had my brother and I who had played and wanted back in. From there, we recruited his wife, who recruited at her workplace. We even picked up a guy on Next Door. Nearly all of the group had little experience but now, we are on every week. A guy who is a former player is now DM and we video conference him in from Texas after he moved away. There is just something really cool to see.

And DMing for my nieces and nephew is a great experience. They are a freshman, a 5th grader and a 3rd grader and the way they approach and problem solve keeps me on my toes but in the best way possible. They are the anti-murder hobos.

Adam Oh wow, that’s got to be an awesome experience for a DM. I’m used to my players killing things to get through situations instead of having conversations.

Whit I think it’s just nice to have options. I’d imagine that some people prefer a system like Pathfinder for deep, deep character creation. Maybe it helps them feel more “real” or more into that character I guess? But I like what 5e has done where the attempt has been made to let the rules get out of the way so you can be free to play the game. I think both systems are necessary because both types of people exist, ya know?

Because at the end of the day, whichever system you play the goal is the same. Be a part of a cool story with your family or friends.

Adam I definitely agree with you there, Whit.

You absolutely nailed it! Coming together to tell a great story and grow as individuals.

Whit Or just be murder hobos. 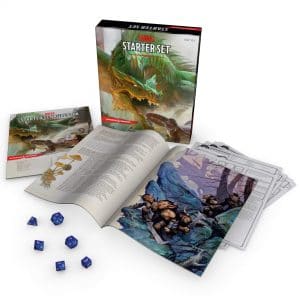 Jason If you haven’t played DnD before, there are lots of great ways to find a game. And, kudos to their marketing team, Wizards of the Coast has a starter box that has everything you need, an adventure, the basic rules, dice and it is usually $15 or less on Amazon. You will need to either recruit a DM or find a brave soul willing to take that on but it is a great way to get started!

Or, you can find the more organized games at game shops through the Adventurer’s League program.

The stories are out there, waiting for more people to get together, have fun and tell them!