All You Need to Know About D&D Adventurers League

Earth Nerd Adkins  Recently I had my very first Adventurers League experience along with Earth Nerd Jason and a couple Nerds on Earth faithfuls and friends, Erskine and JB James. In the couple short years I’ve played Dungeons and Dragons, I’d not put my hands to the AL plow and, boy, am I regretting that decision dearly today. So I thought I’d invite Jason–who is very familiar with Adventurers League both as a player and as a DM–to answer some questions and otherwise talk up the option to those of you who might be on the fence about or entirely uninitiated into AL.

So, Jason, in your opinion, what are some of the best pros of participating in anything Adventurers League related?

Earth Nerd Jason I think one of the best parts of the AL program is that it is built to be very welcoming to new players. Here in my area, there are games listed 4 nights a week at various game shops. So, if you’ve never played D&D, it is a great way to jump into the game as a squishy level 1 character.

And there is a quirky rule that lets you change everything about the character except the name until the character hits level 5! In a game I DM’d the same character was a dwarven fighter one week and a tiefling Warlock the next! That lets you try out lots of things before you really commit.

[Here is a series of four articles that Clave wrote for the official Adventurers League blog to help new players acclimate.]

Adkins That is a pretty neat feature. Most DMs want you locked in from the start at their table unless that character bites the dust or has a really good roleplayed reason to quit the party.

Can a prospective player just walk in the door to their FLGS (friendly local gaming store) and plug in and play?

Jason Yep. A good shop that has Tier 1 games (levels 1-4) will have some pregenerated characters. When I DM, I basically ask the new player what kind of character they want to be and we go from there. And, because of the change rules, we can tweak it after the first week.

After that first week, if the player wants to play in more AL, they likely want to register and get a DCI number, which is what Wizards of the Coast uses to track their game play moving forward.

(And pro tip for DMs: put yourself together a set or two of newbie dice: each die should be a different color, making it easier for the new player. (“Roll the red to attack. Now roll the green for damage.”)

So, AL, great for first timers and relatively new players.

But you had some background with the game. What did you like about AL when you were playing the first time?

Adkins I really enjoyed the contained feeling of what we did. One-and-done kinda, you know? Is it actually like that on a week-to-week basis, or was that just a feature of the event we attended? I ask in part because while playing regularly every week is super appealing to me…in reality, I’m highly likely to miss here and there. Will I “fall behind?”

In any of the adventures that aren’t in the dungeon, it is easy enough to write a character in or out as necessary. For example, we have a game weekly right now where a character missed. I read ahead and there was a clear and easy path to put him back in after he missed. Most AL modules are built to be one and done 2-3 hour sessions.

Adkins So what am I missing if I miss? 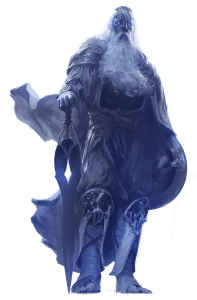 Jason So, the obvious is gold, XP, and downtime. That said, most modules will give you some knowledge or background that would make later modules richer but it wouldn’t be necessary.

For instance, the tier 1 story in the Storm King’s Thunder season leads to a confrontation with a giant named Bad Frul. The season slowly build towards an epic fight but you could also walk in on the session with the epic fight and be fine. There is a giant and his horde attacking the city and you need to save it. If you’ve played the whole season, it means more but it isn’t necessary by any means.

Adkins You say “epic fight…” Is that the “epic” we participated in, or was that a separate deal? Because that thing was amazing! Playing in that thing was by far the most tense I’ve ever been playing DnD.

Mechanically speaking: When you play DnD, what you do has (obviously) repercussions for your party. But in that epic, what our party/table did had positive or negative effects on other parites, tables, and even tiers. That is some pressure, man!

But, man, if that wasn’t the most exciting DnD experience I’ve ever had.

Jason Yep. Epics are a lot of fun. They are usually tied to something like a convention or other event and different groups across all the tiers have different options that all come together for one story. When done well, it should be exciting.

Which brings us to another thing that I like about AL: leveling up. It is just a lot of fun to take your character and keep playing adventures as the character gets stronger and stronger. It is the same feeling as playing a video game and working through but I find I am more committed and invested.

Adkins Anything different about leveling in AL as opposed to in an at-home campaign?

Jason Not a ton. You keep track of XP for your character and an adventure log. One thing that AL does do is provides XP and downtime days for DMs, as an incentive to make sure they have DMs for AL games. 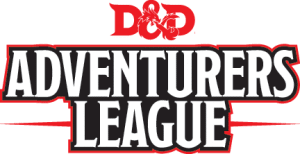 You can also trade magical items via an official Facebook group or at most epics and it uses some of your downtime. But you cannot trade items between your characters; your level 11 paladin can’t pass on a Cloak of Protection +2 to your squishy level 2 sorcerer for instance.

Adkins I dig the magic item system and economy! Especially the online element.

So based on all this, Jason, can you think of any good reason why first timers or veterans should pass on AL?

Jason The quiet nerd who is off in a corner by himself is a stereotype for a reason. Adventurers League is a great chance to get out, meet people, play some D&D, and share that experience with others. Cheap (if not free) fun that helps the gaming community continue to expand and grow. It is definitely worth checking out of your FLGS hosts games. And if not, you should encourage them to!

Well, there you have it.  Don’t be like me and put off diving headlong into Dungeons and Dragons Adventurers League! Use this here handy-dandy Store and Event Locator to find opportunities in or near your hometown, and check out this informative piece on everything you needed to when it comes to AL play.