Sometimes I just wonder if writers run out of ideas. Take Chris Claremont for example. Working for the House of Ideas, Claremont wrote one of the most legendary runs in comics, shepherding the X-Men comics throughout all the 80s. And the X-Men weren’t just the best selling comic in the spinner racks during the Claremont years; number 2 wasn’t even particularly close.

Let’s start with the New Mutants, created in 1982. We’ve written tons about the New Mutants before, so I’ll keep this short and *ahem* simply cherry pick the team members that make my point [natch]. 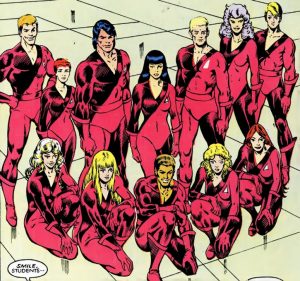 Next up are the Hellions, created in 1984 to serve as school rivals for the New Mutants, again by Chris Claremont.

Both the New Mutants and Hellions had at least a half dozen members, so the power sets absolutely did diverge. Still, it’s clear that at least in a couple of occasions there are very clear analogues. If nothing else, it made for some fun one-on-one battles. Wolfsbane always fought Catseye head-to-head, for example. 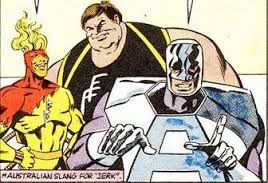 Next up were Freedom Force, created in 1985, by–you guessed it–Chris Claremont. This team had been seen before as Magneto’s Brotherhood of Evil Mutants, but we’re talking about the Mystique reorganization that turned them into a government backed team. 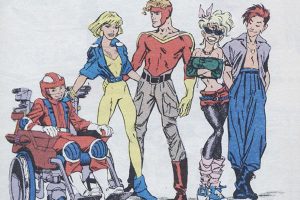 The New Mutant roster was expanded in 1988 in order to include the X-Terminiators. Two notable members include:

Again, the larger teams diverged, but there are also some really clear analogues once again. Then you could begin to compare these teams to one another with other interesting matchups (like Thunderbird of the Hellions vs. Stonewall of Freedom Force, for example).

I was being a little facetious with the title and I certainly cherry-picked my examples. Come to think of it, maybe Chris Claremont didn’t run out of ideas after all. In fact, its likely that it was intentional. We want comic characters to be recognizable and to resonate. What better way to resonate than to model them after other beloved characters, yet give them a simple twist? Being the Chris Claremont fan that I am, that’s the theory I’m sticking with.

You also want teams that match up frequently against one another to…well, match up. By making many of the power sets to be analogous, Claremont was able to create evenly balanced foils that made for good stories in the comics. All these teams needed to play in the same class since they’d be tossing fisticuffs pretty frequently with one another.

So even though there are perfectly plausible narrative and story reasons for the similarities, it’s also plausible that Chris Claremont sometimes hit a deadline without hitting on a fresh idea. The easiest solution to that was to look at Wolfsbane and think, “Eh, let’s try a cat this time.”

All You Need to Know About D&D Adventurers League

Nerd Obsession: Chris Claremont, the Man Who Defined the…