By the early-80s, Chris Claremont had established the Uncanny X-Men as far and away the #1 comic book on drug store spinner racks. But the tone of the comic had drifted away from being centered on Charles Xavier within a New York school, training a group of teenaged mutants in how to use their mutants powers.

The New Mutants were characters created by Chris Claremont and drawn by artist Bob McLeod. They first appeared in 1982’s Marvel Graphic Novel #4, then ultimately got their own title that ran from 1983 until 1991. Just like Claremont’s Uncanny X-Men, New Mutants had a team approach that featured a heavy does of interpersonal drama amidst the punching and zapping on bad guys.

Many of the main team members have gone on to become some of the most beloved Marvel characters: 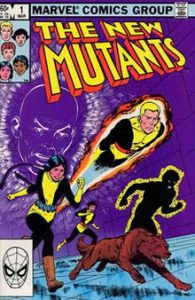 These primary 9 characters would form the nucleus of the team for the majority of the original run of the comic. Chris Claremont continued to write the comic alongside Uncanny X-Men, but when more X-Men spinoff titles started hitting the scene, he turned the book over to Louise Simonson, who did a wonderful job with it.

Some of the major themes and storylines were:

Later in the book’s run, Simonson had new teenaged superheroes join the team like Boom-Boom and Skids, but they never became as beloved as the OG New Mutants. The big shift was when Rob Liefeld took over penciling and co-plotting for the book at the end of 1989. Many pouches came to the book and the characters Deadpool, Cable, Domino, and Shatterstar had their first appearance. That gave it such a different vibe that the run ended at issue 100 and those new characters were spun out into their own book, X-Force.

There have also been a couple attempts to either reboot the book with new characters or to bring back the original members, albeit a little older. While run particular reboot written by Zeb Wells was solid, nearly everyone would agree that it was the mid-80s period when the book was pure magic.

But the New Mutants are suddenly relevant again! They have a movie coming to the big screens that is produced by Fox. Early reports suggest that the Demon Bear Saga will be the story the the film and most of the original core team members will be a part of the cast.

Until then, I suggest you give the run a read. It’s both great story and great nostalgia. It’s available in the Marvel Unlimited app and trades collect the entire run.